From the Department of The All-New You Asked For It!

For fuck’s sake. After pissing off and declaring he was never coming back, neo-Nazi radio ham Hal Turner is back, with denials (of course) and demands for more money (of course) from his highly-critical listening audience.

I have pledged four more Hal Turner Shows over each of the next four weeks. If enough money comes in from listeners to cover that expense, you’ll get four more shows in March. If not, the end.

When I quit on January 9 it was for a whole slew of reasons outlined in my show. The long and short of it was that I was emotionally and financially spent, my feelings were hurt by the back-stabbing scumbags in the movement and I needed time off.

I’ve had a few weeks to relax and am willing to bring the show back, but YOU have to pull your weight with the money. No more fucking around figuring someone else will donate. YOU are the “someone else” so put $5, $10, $20, $50, $100 in the mail so we can meet the $1100 expenses for the next month of show. I will post the contributions received on this site so all of you can see.

Fat Tony: Chief Wiggum! You honor us with your presence.
Chief Wiggum: Baloney! I’m not going to rest until one of us is behind bars. You! You wouldn’t happen to know anything about a cigarette truck that got hijacked on Route 401?
Fat Tony: What’s a truck?
Chief Wiggum: Don’t play dumb with me!

A. Yes Virginia, there is a neo-Nazi pub in Fitzroy.

The Birmy hosted the 2006 ISD gig, the 2005 ISD gig (the 2004 ISD gig was held elsewhere), the 2003 ISD gig [?] and was the venue for the memorial in years previous to this. In 2002 The Birmy hosted a gig organised by the same mobs — Blood & Honour Australia and the Southern Cross Hammerskins — to celebrate Hitler’s birthday. The pub has also been used to hold organising meetings, generally welcomes boneheads, and is known to both locals and police for this reason. Note that one of the difficulties in establishing exactly when meetings have taken place (and to a lesser extent gigs) is that both groups operate clandestinely. Their ability to do so requires people like Gary, the manager of The Birmy, and the handful of ostensibly ‘apolitical’ skinheads who attend such gigs to co-operate with these groups in their efforts to remain unexposed: hence Gary’s denials that any such gigs or meetings have ever taken place (a situation made all the more farcical by the boneheads themselves conceding the venue). Suffice it to say that during the ten years or so Gary has been managing the pub, B&H and the SCHS have been made welcome on repeated occasions. (Other bonehead venues have included the Melbourne Croatia Social Club in Sunshine (the venue for last year’s ISD gig) and The Jam Tin Rehearsal Studios in Cheltenham.)

“The jury found he then either butted or punched the victim in the head before stabbing him in the abdomen.” 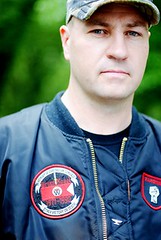 One of The Birmy’s regulars is the Very Reverend Patrick O’Sullivan. Patrick’s Church — The Creativity Movement — features in a recent article in the Melbourne Leader. Anyone who’s ever spent any time walking the streets of inner Melbourne has probably encountered one of his stickers, often scratched out, attached to a pole or building. Other than through direct appeals, this is Patrick’s preferred method of proselytising on behalf of his faith. The available evidence suggests that this strategy has its flaws, as to this point Patrick has only managed to recruit a handful of teenage boys to his cause.

Anyway, here’s what JOG — in the form of a problem called Maria — has to say:

A WHITE supremacist group continues to operate in Melbourne’s inner-city, despite apparent breaches of the Racial and Religious Tolerance Act. The Creativity Movement promotes itself as “the most Anti-Christian Church in the World” and its supporters post stickers across town reading, “White Power! White People Awake, Save the White Race.”

The group’s Australian leader, Patrick O’Sullivan who refers to himself as a Reverend argues it is their right to do so. “We have a right to congregate our religion; if people don’t like it, tough luck,” he said. “There is nothing wrong with promoting the white race. Nobody is forcing no one to join it, so I am not apologetic.”

Mr O’Sullivan refused to provide details on the group’s headquarters, saying only that it met at different venues in the inner-city and had a Collingwood PO box.

He would not disclose how many members the group has.

In his 43rd year, and nearly five years since he threw his final punch, talk of a comeback seems like a long-forgotten joke. Instead, becoming one of sport’s elder statesmen and a citizen of the world suits him. Racism was rife in the London he grew up in during the Seventies, but that, he believes, has changed.

“You never hear monkey chants at British football grounds now like we did when England played Spain,” Lewis said during an interview with Piers Morgan for GQ magazine. “That was shocking. Britain has changed a lot. When I go back to my old neighbourhood in East Ham, I’m amazed by how different it seems. My barber, Carlos, is still there, but that’s about it. The ethnicity is very different. And the laws are getting a lot stricter against racism, which is great. The Stephen Lawrence case and others have made a big difference.

“I remember feeling that people didn’t like me just because of my skin colour. But I also remember a lot of guys coming to beat me up and a white skinhead protecting me. And I was so shocked because I associated a skinhead with German Nazis who hated Jews and black people. I knew then that there was a part of England that didn’t like black people, or racial integration. And you still get that, but a lot of it is ignorance rather than racism. I think education and travel are so important…”

38 Responses to Contrary to unpopular demand