See how fast words travel my friends? Be careful what you write on the internet…
Coz you never know when some stalker is gonna put it on there [sic] website.
Thanx to the people who have supported us… and to the random [sic] people letting us know about this anarchist knobjockey Mr Moran…

See you in hell. 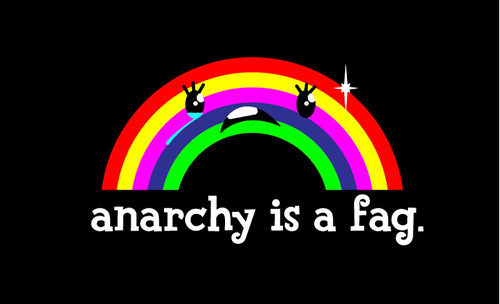 In Brazil, members of the Federação Anarquista Gaúcha (FAG) are facing repression by local authorities.

On Thursday 29th October, the Civil Police of Rio Grande do Sul (Brazil), under the command of Governor Yeda Crusius, broke into the premises of the Federação Anarquista Gaúcha. Police seized various materials such as posters, minutes of meetings, the hard disk of a computer and also the contents of refuse containers that were at the headquarters. They also tried to intimidate those who came to show their solidarity and names contained in the records of the organization’s website. Two comrades were arrested and charged.

Our solidarity is not just in words…

Today 50 comrades gathered at the Brazilian Embassy in Uruguay to demonstrate against the repression that has hit the comrades of the Federação Anarquista Gaúcha.

The rally was organized by Uruguayan anarchist collectives with the purpose of expressing our solidarity with our comrades.

For an hour, flyers were distributed and there was singing and waving outside the embassy. We were then met by the first secretary of the embassy, Arnaldo de Baena Fernandes, to whom we handed a letter denouncing the situation and demanding an immediate halt to the persecution of anarchist popular militants in Porto Alegre. He claimed to know nothing about the case but expressed an interest, saying he was aware of the murder of the landless peasant comrade Eltom Brum.

The various organizations involved in the protest expressed a commitment to keeping abreast of the case and allowing no foothold for the persecution to which we anarchists have always been subjected.

With the comrades of the FAG!
With solidarity and action!
Arriba los que luchan!

Nestor McNab (November 17, 2009) writes: ‘The police investigation has now ended, with the result that a total of 8 comrades have now been indicted for “criminal offence against the honour [of the governor, Crusius], incitement to commit a crime, and conspiracy or gang membership”.’

On Monday, November 30 there’s gonna be a party on Smith Street in Collingwood just down the road from The Birmingham Hotel (the formerly fascist-friendly venue that ‘Chunga’ and his band did so much to support and which was subject — in the words of Doug Smith of the bands Bulldog Spirit/Marching Orders and chief spokesperson for ‘Skin Heads Neither For Nor Against Racial Prejudice’ — to “a pretty unsuccessful boycott“). The party is taking place the day before ‘Local Law No.8’ comes into effect:

Drinking alcohol on the streets of Yarra will be banned from 1 December, Yarra City Council decided last night.

Council resolved to introduce Local Law No.8, which will empower police to request that people drinking in unlicensed areas on the streets of Yarra at any time of the day pour out opened drinks.

The only councillor to have voted against the Law was the dirty filthy lousy rotten stinking communist Steve Jolly. The pumpkin-hating (long story) Red, along with Fitzroy Legal Service’s Belinda Lo, was interviewed by 3CR’s Done By Law on October 27, and you can listen to the interview here.

Things kick-off at around midday, and it is — in the words of Gil Scott-Heron — a BYOT (Bring Your Own Thing) affair — food, BBQs, musical instruments, amplifiers/PA systems, tables, chairs, and so on.

I live in Melbourne, Australia. I like anarchy. I don't like nazis. I enjoy eating pizza and drinking beer. I barrack for the greatest football team on Earth: Collingwood Magpies. The 2021 premiership's a cakewalk for the good old Collingwood.
View all posts by @ndy →
This entry was posted in Anarchism, Collingwood, State / Politics, War on Terror and tagged Collingwood, Federação Anarquista Gaúcha, Local Law No.8, Smith Street. Bookmark the permalink.