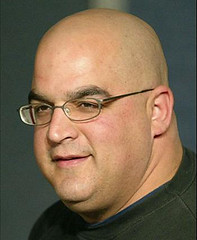 #129 of the Southern Poverty Law Centre’s Intelligence Report (Spring 2008) has just been published and as usual is well worth a read. (As is Searchlight magazine, the March # of which apparently contains an article on notional anarchism in Germany which I look forward to reading.) Included in the latest # is a profile of bizarro Bill White, leader of the American National Socialist Workers’ Party (and millionaire landlord); an interview with supposed former bonehead Sean Gaines (currently on trial for the murder of Mark Mathes); and a discussion of the situation facing net-Nazi and amateur radio ham Hal Turner. In connection with the latter, SPLC quotes another net-Nazi named “Yankee Jim” to the effect that Hal most likely is — as he’s been accused of being — an FBI informant.

More recently, the same “Yankee Jim” — a neo-Nazi named James Leshkevich — killed both himself and his wife Deborah. The last entry on his blog, ‘The Hudson Valley Freeman’ (since closed by Blogger/Google), is titled ‘I Caught My Wife Sleeping With Another Man…’ and dated February 18, 2008. The next day, Leshkevich committed his final act…

A PET cockatiel was beheaded because it had been “singing too much”, a cat was hung by a leash, another cat was put in a microwave and other pets were shot, stabbed, kicked and thrown.

As horrific as these stories are, what is worse is the fact that the men who abused animals like this were also harming their own loved ones.

And the fear that pets will be harmed means one in three women delay leaving an abusive relationship.

In more than half of cases where women are abused, family pets are also attacked.

The findings are from a Monash University paper, ‘The Relationship Between Family Violence and Animal Abuse: An Australian Study’. The research is the first of its kind in Australia and will be published this year.

Researchers interviewed 102 women with a history of family violence, recruited through the Eastern Domestic Violence Outreach Centre [03 9870 5939], and a control group of 102 women with no history of violence.

Co-author and psychology department associate professor Eleonora Gullone said that actual or threatened harm to pets was one of the ways abusive partners kept women in relationships.

“One of the concerns is that women stay in the violent situation longer, endangering themselves and their children, because they are afraid to leave the pets,” Dr Gullone said.

The study found that 53% of women in violent relationships reported their pets had also been abused. By comparison, only 6% of the sample group had pets who were harmed, and in most of those cases the harm was accidental.

The study found that 33% of women had delayed leaving the relationship by up to eight weeks out of concern for the welfare of their pets.

Pets were killed in 17% of households where there is family violence, including fish, birds and farm animals. In some instances, multiple pets were killed.

No pets had been killed in the control group.

Children were witness to the abuse in 29% of cases, leading to concerns that they had an increased likelihood of growing up to be abusive adults because of the proven links between witnessing abuse and engaging in it, said Dr Gullone.

She also said previous research had found many murderers and hard criminals had histories of animal abuse, meaning animal abuse could be used to track perpetrators of human crime.

The research recommended that the public be made aware that in instances of pet abuse, there was a likelihood that people in the household were also being abused, and for neighbours to be alert.

RSPCA Victoria spokesman Ray Lord said the society had a long-running program designed to help victims of domestic violence. The non-profit organisation will take care of pets when necessary, making the step of leaving an abusive relationship easier.

“We take in pets through our welfare boarding program for many different reasons, one of which is to help people escaping domestic violence,” he said.

Cases of pet abuse seen by vets include a dog whose leg was broken when it was thrown off a balcony during an argument.

A social worker reported that one woman’s partner would hold the family dog to the phone and make it whimper to manipulate the woman into returning home.

Speaking of which, whatever happened to Alexander Things That Batter Downer?