Everyone’s favourite Hollywood Nazi Bill White — or William A. White — has been found guilty of talking shit on the, ah, Internets. His “Racist threats could mean 35 years in prison for the Roanoke neo-Nazi”:

Done in by his own words, Internet hatemonger William A. White was convicted this afternoon of threatening people from Virginia Beach to Canada.

The verdict, however, was not a total repudiation of White’s assertion that the First Amendment should protect his incendiary speech. Of seven counts against White, the federal jury acquitted him of three.

White, who will be sentenced later, could face up to 35 years in prison.

The leader of a Roanoke-based neo-Nazi group, White was returned to the city jail late this afternoon as a snowstorm swirled around the downtown federal courthouse where, for the past week and a half, the jury heard testimony about how he used the Internet and other means to terrorize total strangers with whom he disagreed.

Yet in the end, White’s own words led to his downfall…

On December 16, Canadian bonehead Kyle McKee got himself arrest in Winnipeg. McKee was on the run for a coupla weeks while being sought by Canadian police in connection with a bombing in Calgary last month; the bombing was supposedly directed at a rival bonehead. 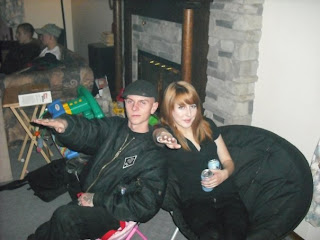 I live in Melbourne, Australia. I like anarchy. I don't like nazis. I enjoy eating pizza and drinking beer. I barrack for the greatest football team on Earth: Collingwood Magpies. The 2021 premiership's a cakewalk for the good old Collingwood.
View all posts by @ndy →
This entry was posted in Anti-fascism, State / Politics and tagged Bill White. Bookmark the permalink.