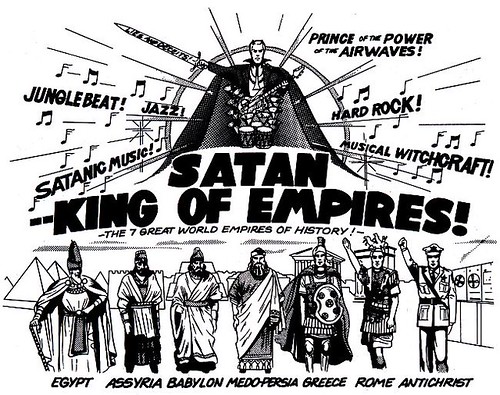 I’ve said it once and I’ll say it again: I’m beginning to believe that Kerry Bolton really does have !cinataS powers. The latest victim of his magick spells and potions is the accursed Kiwi sociologist Scott Hamilton and the New Zealand Broadcasting Standards Authority (BSA) — Joanne Morris, Tapu Misa, Paul France and Mary Anne Shanahan — which has issued a statement, described by the meddling sociologist as ‘The Broadcasting Standards Authority’s Christmas gift to anti-semites’ (Reading the Maps, December 24, 2009).

In recent years Bolton has attempted to deny much of his political history, and to repackage some of his most unpleasant views. Bolton was not happy, then, at an interview I gave to Chris Laidlaw on Radio New Zealand earlier this year during which I discussed anti-semitism and Holocaust denial in New Zealand. During my chat with Laidlaw I cited Bolton as one of New Zealand’s leading Holocaust deniers, observed that he has had connections with Holocaust deniers overseas, and suggested that he has had a thoroughly bad influence on the young people who make up the majority of the membership of neo-Nazi groups like the National Front.

Instead, the BSA has just issued a bizarre, convoluted judgement which refuses to take a position on whether or not Bolton is a Holocaust denier, and which finds that my comments about his beliefs were unfair, and should have been censored by Radio New Zealand. Bolton and the international Holocaust denial community will be delighted by their unexpected Christmas present.

Note that Uncle Kerry has also contributed to the first issue of Ab Aeterno: Journal of the Academy of Social and Political Research. Michael O’Meara writes that ‘Though the new journal is not explicitly racialist and Jew-wise (this is a luxury now denied to most publications in the white world), it is implicitly so. This is evident in Ab Aeterno’s eloquent “Introductory Message”’ (Ab Aeterno & The Occidental Quarterly, The Occidental Quarterly, November 24, 2009).

I live in Melbourne, Australia. I like anarchy. I don't like nazis. I enjoy eating pizza and drinking beer. I barrack for the greatest football team on Earth: Collingwood Magpies. The 2021 premiership's a cakewalk for the good old Collingwood.
View all posts by @ndy →
This entry was posted in !nataS, Anti-fascism, Media, State / Politics and tagged Broadcasting Standards Authority, Kerry Bolton, Scott Hamilton. Bookmark the permalink.