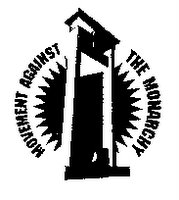 On this fabulous Queen’s Official Birthday Weekend, a Top 40 dedication:

Lord grant that Marshal Wade
May by thy mighty aid
Victory bring.
May he sedition hush,
And like a torrent rush,
Rebellious Scots to crush.
God save the Queen!

Well, according to shit-for-brains Swedish fascists anyway, who this weekend goose-stepped about Stockholm and Gothenburg in honour of Gustav, Adolf, and genocide. Sadly, a number of the naughty neo-Nazis got themselves arrested by Swedish police, apparently because they were being silly buggers, seig heiling and generally carrying on like pork chops. Not a nice way of thanking Swedish police for providing a protective cordon really.

The marching and the shouting and the seig heiling is an annual event for the far right in Sweden, especially those organised as the National Democrats, and attracts some opposition. This year, the neo-Nazi numbskulls supposedly numbered about 1–1,500; the number of those opposed to their polluting the streets is not recorded. Aside from the arrests, there were a number of clashes between the fascists and antifa, although again details are sketchy.

STOCKHOLM, Sweden: Swedish police say they are holding 20 people suspected of agitation against ethnic groups after a Swedish National Day rally. Police spokesman Lars Marklund says some 120 people were initially detained after Friday’s rally for making banned Hitler salutes and shouting Nazi greetings. Swedish news agency TT says most of the demonstrators are believed to belong to a neo-Nazi group. Marklund says about 100 demonstrators were released Saturday and that the 20 suspects remain in custody mainly because they refuse to talk or because they have not yet been identified. The National Day rally in central Stockholm attracted hundreds of people and was arranged by Swedish nationalists.

Far-right extremists clashed with a gang of left-wingers on the streets of Gothenburg early on Friday morning. A 25-year-old man was injured and taken to Sahlgrenska hospital. He has minor injuries. According to the police, the people involved are a group of far-right extremists and their left-wing opposites, the Afa (Anti-Fascist Action group). Shortly before 6am on Friday morning, police were notified that a fight had broken out, with participants using iron pipes as weapons. The police do not know exactly how many people were involved, but nine people have been taken in for questioning. According to police spokesperson Cecilia Ekbladh, there is not much to be said until police have questioned all nine. Speaking to TT, police spokesperson Ekbladh explained that the crime classification of grievous bodily harm could still change. “So much is unclear until we have questioned everybody”.

Note that a few weeks prior to the neo-Nazi march, Aryan Supermen attacked a feminist festival in Österfärnebo. “Witnesses described how a group of Nazis or boneheads got out of a car, which was circling the area. After shouting ‘sieg heil’ and doing the Nazi salute the men then proceeded to assault the teenagers who had exited the college” said Kalju Poltrago. “They assaulted the teenagers with metal pipes. One girl was beaten bloody and another thirty year old man was battered while he lay on the ground. He was injured so badly that he had to be rushed to the local hospital for treatment.” 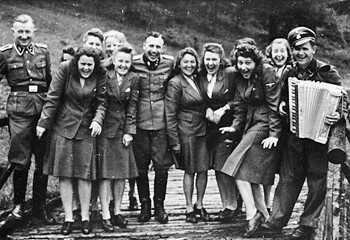 On Dateline this week (8.30pm, Wednesday, June 11, 2008), ‘Happy Snaps From Hell’: “This week Dateline takes a chilling look at the lives of those who ran the most notorious death camps ever known – Auschwitz. Video journalist Michael Maher takes you back in history, as he reports on the discovery of a photo album – dating all the way back to 1944.”

The photos themselves were publicly unveiled in September last year. The reaction of contemporary Australian neo-Nazis was instructive. For example, on Stormfront Down Under, a Melbourne teenager — who now considers himself a ‘national anarchist’ — wrote in relation to the above:

They are celebrating the girl’s graduation from Jewish strangulation school?

The group he has since joined is of course led by Welf Herfurth, a Holocaust denialist.