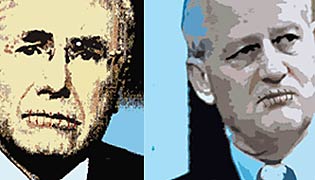 Today’s Age contains an interesting editorial on the subject of the Federal Government’s proposal to alter the Telecommunications (Interception) Amendment Bill to make lawful the monitoring of citizen’s private communications without i) their knowledge or consent and ii) a magistrate ruling them a suspect in a crime. According to The Age:

ASIO and the police will be given the power to tap the telephones of third parties to the actual suspects under investigation. In other words, people suspected of nothing [sic] will be under surveillance. Police will have the power to keep the tap in place for 45 days. ASIO will get 90 days. The warrant would only be issued by a judge, and only in cases where a person is suspected of a crime that carries a seven-year jail sentence.

The Age’s chief concern with the granting of such powers to ASIO and the police is the law’s invasiveness and the fact that it flouts the, ah, conventional wisdom that the ‘innocent’ should go unpunished. As such, the law violates liberal, democratic principles, and The Age, being a liberal broadsheet, rightly condemns it. A more notable feature of The Age’s editorial, however, is its presumption that other, equally ‘innocent’ citizens haven’t had their communications monitored, their faces photographed, their meetings recorded, their groups infiltrated, either quasi-legally or illegally. In fact, The Age has reported on such matters more than once in the past: has this too now gone down The Memory Hole?

Finally, The Age editorial also notes that the Australian Attorney-General Seymour Burns — inspired, no doubt, by his comrades in the UK Labor Party — has recently announced his intention to (re-)introduce a national ID card. The last time a (Hawke Labour) Government tried to do this they failed. And even if the legislation is passed, it still has to be carried out and, in the face of resistance, enforced…

Q. Did you know that other ‘counter-terrorist’ legislation carries a seven-year jail sentence?

Urging a person to assist the enemy
(7) A person commits an offence if:
(a) the person urges another person to engage in conduct; and
(b) the first-mentioned person intends the conduct to assist, by any means whatever, an organisation or country; and
(c) the organisation or country is:
(i) at war with the Commonwealth, whether or not the existence of a state of war has been declared; and
(ii) specified by Proclamation made for the purpose of paragraph 80.1(1)(e) to be an enemy at war with the Commonwealth.
Penalty: Imprisonment for 7 years.

Urging a person to assist those engaged in armed hostilities
(8) A person commits an offence if:
(a) the person urges another person to engage in conduct; and
(b) the first-mentioned person intends the conduct to assist, by any means whatever, an organisation or country; and
(c) the organisation or country is engaged in armed hostilities against the Australian Defence Force.
Penalty: Imprisonment for 7 years.

A summary of the Anti Terrorism Bill (No 2) (2005) may be found here; more general information, including links to the legislation, legal opinion and commentary may be found here; while Chas Savage’s love of sedition is tenderly expressed in this (slightly, and oddly, nostalgic) letter to the Australian public.

And remember Eric Blair’s words: “In a time of universal deceit, telling the truth is a revolutionary act”.

I live in Melbourne, Australia. I like anarchy. I don't like nazis. I enjoy eating pizza and drinking beer. I barrack for the greatest football team on Earth: Collingwood Magpies. The 2020 premiership's a cakewalk for the good old Collingwood.
View all posts by @ndy →
This entry was posted in Media, State / Politics, War on Terror. Bookmark the permalink.
Login