Unite Against Fascism is a weird mob 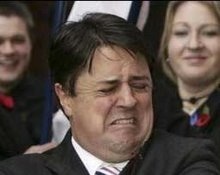 Over the weekend the company who supply portable toilets to the BNP Red White and Blue event were targetted by militant antifascists. All companies who support the RWB can expect to be targetted also. If you make money by helping the BNP, we will cost you money!

STS of Chesterfield, who happily process the BNP’s shit (and we all know they are full of it) by servicing the RWB event with portable bogs, had their depot in Pottery Lane East, Chesterfield, targetted. Their gates were locked and glued and the slogan “bnp = shite” graffitied. STS have their office at 47 Rockingham Close, Chesterfield, S40 1JE, phone 01246 278754 and 07889 832076. Get in contact and tell them what you think of their support for the BNP.

The British National Party is organising a Red White & Blue weekend gathering in a few weeks (August 15–17), and for some months local anti-fascists have been organising to protest and (presumably) to attempt to disrupt proceedings. Unfortunately, for reasons which have not been provided, the campaign group Unite Against Fascism, rather than endorse and/or participate in the action being organised by locals, have decided to arrange for a separate rally to protest the Festival, at a different time. Thus the Socialist Workers Party site — which appears to be the main force behind UAF — reports (July 29, 2008) that:

Trade unions and anti-Nazi activists across the East Midlands last week came together to form a regional Unite Against Fascism group to campaign against the BNP in the area and in the run-up to next year’s European elections. As one of its first actions, East Midlands UAF has called a protest and rally against the BNP’s “Red, White and Blue” hate-fest, due to be held in the village of Codnor, Derbyshire, on Saturday 16 August. The anti-BNP protest will take place at 11am, with coaches to the event leaving from Derby, Leicester, Nottingham, Chesterfield and Coventry. For contact details, assembly points and start times go to the UAF website…

As the Socialist Party reports, via ‘Nottinghamshire Stop the BNP’, activists in Derbyshire and surrounding areas have been campaigning since January, generating broad community and trade union support. Another, anonymous (?) writer notes that:

Between 15 and 17 August, the British National Party will be holding its annual Red, White and Blue “festival” at Codnor-Denby in Derbyshire on land owned by former BNP councillor Alan Warner. For months now, local anti-fascist groups and trade unions have been working to organise a protest on 16 August.

This protest was initiated by Nottinghamshire Stop the BNP, a campaign launched in January by a conference of one hundred labour movement, student and anti-fascist activists sponsored by local unions including FBU, UCU, Unison and the NUT. Notts Stop the BNP aims to build an anti-fascist movement on a working-class basis – mobilising mass action to physically confront the fascists and raising social demands around issues like jobs, homes and services to undercut their base.

The protest also involves Derby Unite Against Fascism, other local anti-fascist groups and a multitude of trade union organisations. East Midlands Unison, East Midlands TUC and the rail union RMT are sponsoring it, and RMT general secretary Bob Crow will be speaking.

Unfortunately, the national Unite Against Fascism organisation has been less keen to support the protest. After months of refusing to acknowledge the issue at all – ignoring repeated invitations to come and get involved in the organisation of the protest, and refusing to announce it from the platform at various national events – UAF has now called its own protest, taking place just down the road and at a different time from where and when the main protest is taking place! (The UAF website implies that theirs is the only protest and supported by all the sponsors, but this is simply not true.)

UAF leader Weyman Bennett met representatives of the local campaign – including the chair of Derby UAF and a representative of East Midlands TUC – on Friday 25 July, but refused to agree to the amalgamation of the protests.

This is bizarre and outrageous behaviour.

UAF is dominated by the Socialist Workers Party (SWP); it may be that its leadership are reluctant to support a protest that they do not control, and one organised with the involvement of other socialist groups. If so, they should sober up! This protest is far too important to let sectarianism get in the way. We call on UAF to enter negotiations with the local campaign for the amalgamation of their protest into the main one, so that we can strike at the BNP and their racist “festival” with a single fist.

Meanwhile, we urge the labour movement and anti-fascists to mobilise for the protest.

Bizarre and outrageous behaviour? Hmmm. Maybe… Maybe it’s worth acknowledging the role of the UAF in channeling anti-fascist activity in directions which are considered by its leadership — the SWP — as being of greatest benefit to it, rather than, as the name might suggest, the fight against ‘fascism’. But this can only be understood through examining the history of the UAF and the SWP, and its antecedents in organisations such as the Anti-Nazi League (ANL)…

Antifa UK | Militant anti-fascist.
Institute of Race Relations | Est.1958, publishers of Race & Class.
Love Music Hate Racism | Est. by the ANL/UAF (SWP) in 2001/2 to gain money and publicity and as a successor organisation to ‘Rock Against Racism’. Organised a big gig on April 27, 2008 in the hope that it would counter the BNP vote at the GLA Elections of May 1, 2008. The strategy failed, and the BNP gained an historic victory.
National Assembly Against Racism | Est.1994. Aligned to Labour.
Searchlight | Monthly investigative journal. Est.1975, widely suspected (in anarchist and other radical circles) of enjoying an overly-familiar relationship with state agencies.
Stop the BNP | Um.
Unite Against Fascism | Est.2004 as an amalgamation (of sorts) of the ANL (in the person of Weyman Bennett) and the NAAR (Lee Jasper).

‘United we will smash the Nazi BNP’, Socialist Worker, June 17, 2008 (“Joint secretary of Unite Against Fascism Weyman Bennett spoke to Socialist Worker about the rise of the BNP and about how we can defeat the fascists”)

15 Responses to Unite Against Fascism is a weird mob