Not everyone “loves Ulster”… 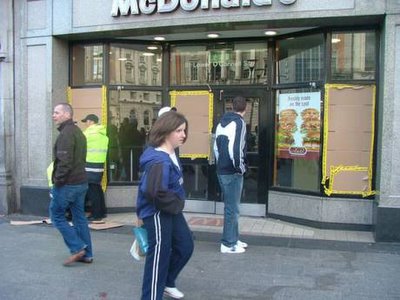 …or McDonalds for that matter.

A political analysis of the Dublin riots and why nobody saw them coming, by an anarchist living in Dublin.

Saturday saw a major riot in Dublin in response to an attempted Loyalist ‘Love Ulster’ march through the main street of the capital. For three hours hundreds rioted in the city centre, banks and shops were attacked and looted and cars were set on fire. All the political parties including Sinn Fein have condemned the riots but few have analysed what happened. This article first submitted to indymedia.ie suggests the riot shows that “he who sows misery, harvests anger”.

I, like almost everybody I know, didn’t predict the events of Saturday. In fact the only person I know who did predict a major riot was a friend of mine who happens to hail from the wee North – in retrospect I should have realised that he had his finger on the pulse, for not only does he have much more experience of sectarian marches, but through his job he knows many of the people who were involved and has an unusual insight and sympathy for those people who most Dubliners write off as ‘scumbags’ and ‘knackers’. This article is an analysis of what happened and why almost everybody got it so wrong. This article is a companion piece to the photo essay which I published yesterday.

I have a lot of experience of protesting and policing, having attended many of the most hyped and heavily policed events that Dublin has seen in the last decade as well as some of the biggest and most volatile international protests that have occurred around the world, both as a participant and a cameraman. From this it is obvious to me that the police were similarly completely surprised by the events of Saturday February 25th in central Dublin.

I also know that the Gardai are more than capable of policing contentious and potentially volatile protests in what would be regarded as a way that is in line with international policing norms. I was there on the Navan road when 3,000 anti-capitalist protestors made the march to Farmleigh on Mayday 2004. On that day there were thousands of police deployed and although the protestors managed to get much closer to the location of the summit than the police would have liked, the state was never in any danger of losing control of the situation. They had deployed thousands of police in riot gear, backed up by water cannon and a massive deployment of surveillance technology and they successfully contained the protestors much as their international colleagues routinely do. Therefore, I do not think that it is conceivable that the complete under-preparedness of the Gardai could possibly be a result of incompetence in terms of their ability to police events – they have proved very successful at containing much bigger protests in the past…

There have been some suggestions that our power-crazed minister for justice or other sinister forces within the 26 county state may have deliberately failed to prepare adequately to police this event in order to further some security or anti-republican agenda. While I’m sure the minister for justice would love to have the power to do this, I’m also certain that he doesn’t and that this theory is entirely implausible. Gardai are generally not happy to be sent out under-prepared to face rioters and if there had been any inkling that a riot was likely to ensue, the guards would have been extremely unwilling – to say the least – to be used as target practice in such a scheme, pawns in the minister’s power game. As it is the Gardai on the ground were extremely angry and remain so that they were sent out to police a situation without anything like the resources that they would have needed to contain the situation. Furthermore, I talked to the Superintendent who appeared to be in charge of operations on the day and several ordinary Gardai and they all expressed the same opinion – that they had anticipated some ‘trouble’ but nothing like the rioting that happened and while it is a foolish person who believes anything just because the Gardai say it is so (I remember the stream of lies and smears that the Gardai press office came out with in the run up to Mayday 2004) – these reactions seemed genuine and unscripted.

Therefore, I think it is clear that the Gardai were genuinely taken completely by surprise by the events of the day and I think that the reasons for them being surprised were exactly the same as the reasons that I and almost all of the other political activists whom I know were similarly taken by surprise.

Essentially, our mistake was to assume that political protests need to be organised by somebody. In general this is true and I don’t know of any other event that has taken place in Dublin in the last 20 years which happened without being organised or planned by some organisation or other. The riots of central Dublin were an exception to this rule, no organisation planned them and almost nobody saw them coming.

The Gardai intelligence reports in advance of the march would have told them that Sinn Fein were trying as hard as they could to keep their members away from the protest – I believe that they announced that anybody who was seen in the city centre on the day would be banned from their functions for six (6) months and this largely worked, I only saw a single shinner in the city throughout the day and he was obviously there as a sanctioned observer and remained behind police lines (where I also inadvertently found myself). Similarly, the Gardai know that the 32CSM had called off their protest and were not interested in provoking a confrontation. While Republican Sinn Fein did organise a counter-protest, the Gardai pretty much know what their membership has for breakfast and are well aware that they are a tiny organisation based around a small number of traditional republican families who are completely incapable of mobilising more than a few dozen die-hards. The fourth significant Republican group, the IRSP, are virtually non-existent in the south and are incapable of organising anything. Besides the Gardai were well aware of the fact that the march was intended as a provocation, a trap for republicans to fall into and that the various republican groups were intelligent enough to recognise this and avoid falling into it.

The other political current that regularly causes the Gardai security worries in Dublin is the anarchists and the Gardai would have been well aware that the anarchist organisations were not at all interested in stoking the flames of sectarianism. The Gardai read indymedia for their intelligence like the rest of us and they would have been aware that the anarchists were not planning trouble for this march – being more interested in taking the piss out of the bigots than getting into a ruck with them. They knew that neither the WSM nor Organise!, the two formal anarchist organisations in the country, were simply not going to get involved in organising a protest that would be seen as nationalist and sectarian. Thus the Gardai came to the same assesment that I did – no political organisations who were capable of causing trouble were mobilising to oppose the Loyalist march and they were right.

From the long years that I have spent attending and covering protests I recognise a lot of faces from these various groups and they simply weren’t involved in the confrontation – those whom I saw were bemusedly observing the whole thing from the sidelines. The people who are claiming that the events were orchestrated by this or that political group are simply liars who are pursuing various agendas and cynically using the riot to attack their political opponents. From the fantasist pathological liars of the Sunday Independent to the PDs, every reactionary in the country will use any such event as this to smear their opponents and they can be safely ignored by anybody who is seeking to understand these events.

So, if it wasn’t organised by political groups, how did it happen?

View a great photo-essay of the riot here. 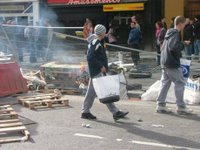 I live in Melbourne, Australia. I like anarchy. I don't like nazis. I enjoy eating pizza and drinking beer. I barrack for the greatest football team on Earth: Collingwood Magpies. The 2021 premiership's a cakewalk for the good old Collingwood.
View all posts by @ndy →
This entry was posted in Anarchism, History, State / Politics. Bookmark the permalink.