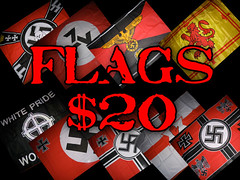 Fascist bookseller Pedro Varela may be in trouble in Spain, but books for sale through the Australian neo-Nazi mail order 9 percent productions include autographed copies of Jewish Supremacism and My Awakening by former Klansman David Duke; The Turner Diaries by dead nutzi William Pierce; Imperium by dead nutzi Francis Parker Yockey and — of course — the nineteenth century Tsarist forgery The Protocols of the Learned Elders of Zion. Note that 9 percent is the merchanding arm of Blood & Honour Australia and the Southern Cross Hammerskins, two neo-Nazi groups currently organising a birthday party for Adolf Hitler on the Gold Coast. (Hitler’s birthday is Tuesday, April 20; the gig is Friday, April 17.) Note also that a number of these titles were formerly available via Australian Protectionist Party (APP) member Martin Fletcher’s site Downunder Newslinks, but following a political re-alignment, these titles were removed (last year) and the party’s phobias, and hence Fletcher’s, are now Asians, Islam, and teh Left. In keeping with their current mania, you can still download a copy of the ‘controversial’ game Muslim Massacre from Fletcher’s site.

Speaking of APP, it declared in its February newsletter that it had obtained 500 members — enough to register with the AEC as a political party. Its chief rival in Australia First declared it had reached this milestone in July 2009, but it is apparently experiencing some technical difficulties achieving its goal. In any case, under the wise leadership of Dr James Saleam, AF will — with the assistance of a number of decrepit members of allied and now largely defunct groups such as Australians Against Further Immigration and One Nation — soon be joining the far left and numerous independents as they battle for last place at the polls.

Of course, like his Leninist rivals — from whom Saleam & Co. draw much of their inspiration — Herr Doktor understands that, given the extremely unlikely possibility of actual victory, participation in electoral contests conducted by the liberal democratic state is a means to an end. For Saleam — bizarrely, a White supremacist of non-White descent — that means assembling a fascist cadre, a project he has spent the last four decades pursuing, with various degrees of success (and occasionally ending in bloodshed). Like a mid-career rock ‘n’ roll or pop band, this also means being able to lower the demographic. In other words, to attract yoof to the cause. Saleam made an abortive attempt at this via a short-lived group called the ‘Patriotik Yoof League’ (PYL). It attracted a small number of racist meatheads before collapsing in a heap. Indicative of the farcical nature of many of the Australian far right’s construction projects, the PYL ended its life while having as its sole member a middle-aged man from Queensland named John Drew, later expelled from AF ostensibly for advocating a vote for the Greens.

Since the disappearance of the PYL, a small number of yoof, alienated from the cardigan-wearing membership of AF, have, like their racist European and North American cousins, been attracted to some of the more contemporary re-workings of fascist ideology, in particular those which attempt to mimic anarchist and radical, ‘autonomous’, left-wing movements. The two can happily work together, it seems, and at least as far as the Hacks @ JJJ are concerned, are more-or-less twins (hear : Hack, Thursday, March 4, 2010).

In the meantime, a brief introduction to some of the newer permutations on/of the far right.

National Anarchism is an oxymoron, and as such tends to attracts morons: White supremacists.

Originating in the UK, ‘national anarchism’ was introduced into Australia by the Sydney-based fascist Welf Herfurth. Born in Germany, but emigrating to Australia in the late 1980s, Herfurth has been a member of a string of racist, right-wing organisations, from the German NPD through to the Australian Friends of the BNP and the One Nation Party. In the few years he has been attempting to cultivate the ideology on Australian soil, Herfurth has gathered around him a small clutch of like-minded souls, most of whom appear to be teenage boys or men in their early 20s, and almost all of whom were attracted to Herfurth (and national anarchism) by way of the US-based White supremacist (and virulently anti-Semitic) website Stormfront.

The national anarchists made their political debut on the Australian political stage in September 2007, when a small group of approximately 20–30 dressed in anarchist drag and formed a short-lived and stationary ‘black bloc’ at an APEC protest rally. (One of the ‘anarchists’ present was NSW APP spokesperson Darrin Hodges.) Although a handful of members have staged a few other rallies since then, in terms of its public presence, this has been the highpoint for national anarchism thus far.

In Melbourne, the national anarchist banner has been taken up by Geelong-based Scott Harrison. Harrison, like Herfurth, has been involved in a string of fascist groups and projects, of which, along with anti-fluoridation, national anarchism is but the most recent. In his capacity as a ‘national anarchist’, Harrison attempted, along with a tiny handful of other national anarchists, to join a May Day rally in 2008, and an anti-censorship rally that December. On both occasions, the fascists were told to go forth and multiply.

Nationalist Alternative (NA) is a new group on the far right that was established in Melbourne in late 2008. In some ways, NA may be regarded as being national anarchism for grown-ups — if those grown-ups are 20-something fascist University students. Like the national anarchists, NA attempts to adapt progressive or radical chic to its own ends, in this case by mimicking the style of ‘Socialist Alternative’, a left-wing party which has been reasonably successful at recruiting University students. (Like the national anarchists, NA is also inspired by similar developments on the European far right, especially in Germany: a recent essay published by NA analyses the prospects for the German far right, advocating, inter alia, the abandonment of obvious signs of Nazism.)

NA announced its presence in 2008 by participating in a campaign to stop the construction of a mosque in Newport, partly by way of supporting an unsuccessful campaign to elect a candidate (Barbara Johnstone) from a local community group (Newport West Action Group) to local council. Since then, it has attempted to garner publicity by focusing upon education and housing issues, producing propaganda specifically targeting University students, blaming the presence of foreigners in Australia for educational and housing shortages, and placing these issues within a broader context of the political agenda of a global elite intent upon deracination and the destruction of the Australian nation.

NA made a minor splash on Saturday, March 6, 2010 when a handful of Aryans — ostensibly Angry @ the Federal Government’s imposition of a filtering system on local Internet access — attended a protest rally in Perth. From a balcony above the speakers’ platform, the fascists unleashed a banner reading ‘Save Water Cut Immigration’. A short while later, a few anti-racists at the rally informed NA that they were not welcome and should leave, which they duly did. “Stop the Filter organiser Trish Zanetti told iTnews that the rally continued as planned after the Nationalist Alternative group left” (Not all welcome at Perth anti-filter rally, Liz Tay, iTnews.com.au, March 8, 2010).

In relation to both the ‘national anarchists’ and NA, the main points worth reiterating are: a) they are fascist in political orientation; b) they attempt to recruit yoof and, in the case of NA, tertiary students in particular; c) they are relatively inexperienced, but receive political guidance from more seasoned right-wing activists; d) they attempt to appropriate anarchist or radical, left-wing motifs; e) generally lacking the capacity to stage their own public demonstrations (like the far right as a whole), they are eager to attach themselves to whichever political project will tolerate their being in its orbit.

The common denominator linking the national anarchists and NA is the New Right, an ideological trend most commonly associated with the French fascist intellectual Alain de Benoist. In the 1970s and 1980s, de Benoist and fellow thinkers attempted to modernise post-WWII fascist thought, and to chart a new course for fascist movements in the contemporary world. Other key influences on post-WWII fascist thinking include Pierre Krebs, Michael Walker, Armin Mohler and also Carl Schmitt (whose writings have also been championed by the critical bizarros @ Telos Press).

March 21 is of course International Day for the Elimination of Racial Discrimination White Pride World Wide Day. In Australia, Perth plasterer Paul Innes, the moderator of Stormfront Down Under, will presumably be plastering the town White with posters proclaiming White racial supremacy — or, at the very least, advocating a run to the hills, and a project of intensive inbreeding.

In Aoteroa/New Zealand, the fascists belonging to Right Wing Resistance New Zealand (RWRNZ) and the New Zealand National Front (NZNF) are expected to jackboot about, presumably with Kyle Chapman — who “retired” from politics last year — to be in the vanguard.

In Canada, the ‘White Nationalist Front’, ‘Western European Bloodline’, ‘Aryan Guard’, ‘Aryan Nations’ and the KKK will be holdng hands in Calgary, and proclaiming their solidarity with other racist, batshit-crazy, swastika-licking Whites everywhere. Announcing the event on Stormfront, Kevin Goudreau writes that the assorted racist and fascists “will be united even if it[‘]s just for 1 day it will happen and everyone can go back to infighting l88r. WPWW 14 wordSS!”

The Canadian schmucks have been busy informing on, threatening to kill, and actually trying to blow one another up in recent months, so it seems likely that their training in brick-dodging has been somewhat curtailed, resulting in fewer and slower targets for competitors in the 2010 Antifa Winter Olympics.

(Elsewhere in North AmeriKKKa, there will be rallies in Connecticut, Massachusetts and New Hampshire. Well, according to the members of the North East White Pride forum.)

Oh yeah. In Melbourne, Hobbit — the short Klansman with hairy feet who “walk[s] around often wearing my Klan tshirt through the jew suburbs of Melbourne” — having been spurned by the racist yoof belonging to the Southern Cross Soldiers, is also being shunned by the boneheads belonging to Blood & Honour and the students of Nationalist Alternative.

Today is the 9th of March,there has been over 1,000 views yet NO ONE has come foward [sic] to suggest anything.We have Blood&Honour,HammerSkins and National Alternitive [sic] members in Melbourne yet not one of them has come foward [sic] to say..Yeah I want to help out on White Pride day.I don[‘]t care if you lot hate me,this is about WHITE PRIDE DAY not me or you,it[‘]s about our survival as a RACE.I don[‘]t know what will happen around the country but here in Melbourne I will be in town all day promoting OUR WHITE RACE,anyone who wants to join me is more than welcome.

My name is Hobbit, Knight of Klans,
Look on my Works ye Mighty, and despair!

it’s war vs zog reborn / with a rod for god / as a prop for a weak ego / that needs absolute white control / their pride is violated / their thoughts are cable regulated / they peddle their electric hate / contaminate state to state / they mourn for the death of a nation / their time spent perpetuating / the myth of a caucasian christ / to prove right the anaemic life / so get loaded up for penetration / proud man in their aryan nation / they play with superior toys / but their games are all for sick little boys / the grand dragon is a phallic name / they use to hide his impotent state / face masked by a secret shame / the real length of the snake / spread hate with genetic lies / castrate and sterilize / at the gates of a molecular hell / stands a reaper with a sickle cell / their ‘order’ is just a friendly metaphor / for club law and a .44 / and goosestepping with the nra / when they can feel their grip slipping away …