A song by Tom Gabel (Against Me!) about “Anna”, the FBI informant and media *. ‘She thinks she’s a hawk / But she’s just a fucking snitch’.

“Anna is a wise one for her years, and she knows she needs to step back, watch, and listen to gain a clearer understanding of her surroundings. She notes mentally what people are wearing and how they act. The next day, with her clothes and behavior tailored to mimic the diehard protesters, she finds acceptance and, according to Lapham, an open door to the inner circle.” ~ Anna’s Story: “Living in the shadows, FBI informant brings down an eco-terrorist cell”, Lisa Floreancig, insurance, quarter 04|08 | See also : What Makes a Good Environmentalist Go Bad?: “Ecoterrorism spreads as green movement enters mainstream consciousness” (Lisa Floreancig): “Lapham says he is unsure whether the FBI has a personality profile of eco-terrorists, but he has his own definite opinion. “I can tell you from my experience what kind of people they are,” he says. “They tend to be anarchists; they believe that the system is corrupt, and that you shouldn’t support the system in any fashion.” Currently, the FBI has nearly 200 eco-terror investigations open, with no end in sight.”

Anna the Medic, one of the FBI’s top informants, has cut a wide swath through the antiwar and animal rights movements.

Listen, my children, to the story of Anna the Medic, who travels the land, bringing the harsh scrutiny of federal law enforcement to Americans engaged in political protest.

In the past two years, Anna, whose real name may be Anna Davies or Anna Davidson, has turned up at rallies and marches from South Florida to Northern California, with a lot of stops in between. She has demonstrated for animal rights and protested the Iraq War, all the while meticulously gathering information on political dissidents for the FBI. According to FBI affidavits, Anna has been a paid informant in 12 investigations of “anarchist” groups. She’s a veritable Scarlet Pimpernel, on the federal government tab… ~ Broward-Palm Beach New Times (June 22, 2006) 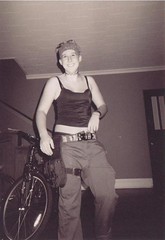 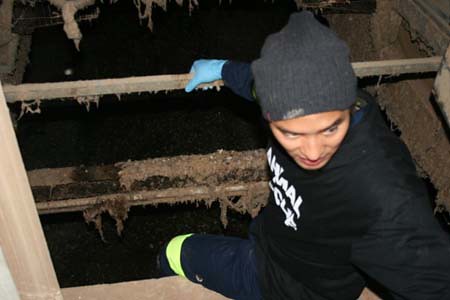 I live in Melbourne, Australia. I like anarchy. I don't like nazis. I enjoy eating pizza and drinking beer. I barrack for the greatest football team on Earth: Collingwood Magpies. The 2021 premiership's a cakewalk for the good old Collingwood.
View all posts by @ndy →
This entry was posted in Music, State / Politics, War on Terror. Bookmark the permalink.

1 Response to Tom Gabel : ‘Anna Is A Stool Pigeon’