The (racist) far right has reacted fairly predictably to the shooting death of 15-year-old Tyler Cassidy in the Melbourne suburb of Northcote last Thursday (December 11). For those for whom The Jew is Public Enimy #1, the fault lies, of course, at the feet of The Jew.

brude: “I hope karma comes back to these rotton [sic] barstard [sic] PIGS like it did in the 1980’s.”
Spinosus: “Police officers in the west are ZOG enforcers, that[‘]s why I don’t like them.”
303pugs: “It looks very much like an anti white manouver [sic] by our new order gov.”
Sam: “As much of a tragedy [as] it is, there is also a lesson to be learnt: Don’t touch drugs.”
Silverfern (CHURCH OF THE NATIONAL KNIGHTS OF THE KU KLUX KLAN): “I believe the cops were justified, if I was me [sic] the little toerag wouldn’t of made it two steps.”
Cup-of-Ruin: “If that had been a Muslim or an Abbo [sic] they blasted there would be an uproar…”
Patriot08: “I love that Brutal Attack song on his myspace page too.”
Etain: “Tyler Cassidy, another white victim of the final solution… Tyler Cassidy is quickly becoming a Ned Kelly. An Australian “outlaw”, fighting to defend what it meant to be an Australian, who tried to survive in a place where he was a MINORITY, and was constantly reminded of his white man’s burden.”
sixtytwo [SCS Sydney]: “The [SCS] are vowing revenge they are vowing to get together.”
firestone: “So SCS: stay strong and hold your ground. Know that your cause is a noble one, as is ours, and the enemies [sic] main weapons are lies and manipulation. Only the weaker-minded guys will fall away for good because they fear criticism too much. This incident will no doubt attract more attention from your/our enemies, so learn as much about who they are and why they do what they do as you can. They will try to manipulate public opinion against you, but understand that these antis are a bunch of pussies who only do such things safely hidden away behind their [computer]. The only time you may catch a glimpse is if they venture out for the latest anti-Nike or G20 protests.”

Also on the anti-Semitic far right, in typically florid prose, Dr James Saleam, Fuehrer of the Australia First Party (NSW), asks, If The Victorian Police Wrongfully Shot A Boy, Why Does The Media Now Wish To Dig A Latrine As His Grave? (Statement By The Australia First Party, December 14.) Herr Doktor — sentenced to three and a half years jail in 1991 for organising a shotgun attack on the home of Eddie Funde, Australasian representative of the African National Congress — blames The (Jew) Controlled Media for plunging headlong down a Super Fun “slippery-slope of untruth, building up a shadowy Internet discussion board, the Southern Cross Soldiers, into a racist, extremist, activist and criminal circle.” Further: “Australia First Party denounces the media line that the Southern Cross Soldiers, an ostensible “nationalist” group, existed outside of the Internet site – MySpace.”

Obviously, Dr. Jim doesn’t leave The Bunker often enough to understand basic Internet terminology, and apparently exhibits a profound Failure of the Will when it comes to actually reading its Pandora’s Box of mal-contents. If he bothered to read their numerous pages (Bebo / Facebook / Myspace / 4chan), he’d know that highly-trained units of the elite division of the volunteer army known as the Southern Cross Soldiers frequently met in meatspace ~ look it up Jim ~ to drink piss and talk shit. Most recently, and just a few days prior to Tyler’s tragic death, the Marvellous mob in Melbourne met to celebrate the White Civil Uprising at Cronulla.

Meaning AF and SCS have something else in common.

Mind you, Jim also thinks Hitler was a TOP BLOKE; on the OTHER HAND, his USE OF CAPITAL LETTERS makes for HIGHLY-ENTERTAINING if not COMPELLING arguments.

Much more interesting, however, is his claim to have discovered an SCS Melbourne leaflet. One in which, according to Richard, “the SCS accuse the Herald Sun of doing a beat up on their group. They claim Tyler’s death was uncalled for [and] that earlier that day Tyler Cassidy was attacked at a train station by a Lebanese gang, and that this is the cause for his crazed agitation, and subsequent death that evening at the hands of Police”. The leaflet itself reads: “Barely 15 minutes before Tyler’s death, he had been the victim of a racially motivated knife attack on a train by a Lebanese Muslim gang. This was not the first time. The attack left him traumatised and agitated.” 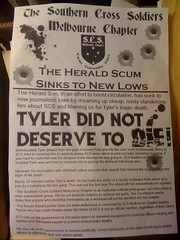 As Richard notes, this is an apparently novel claim. It would also appear to contradict such facts as are known. After catching a bus at Alphington station at about 7.30pm, according to his family, Tyler arrived home “bruised and scratched, and with his shirt torn… at 8pm… [Tyler was] without his backpack, which he’d lost in the fracas aboard a Hurstbridge line train”. He left home 15 minutes later, and re-appeared at the Northcote Shopping Plaza at 9.25pm. In other words, it’s possible that Tyler had some kind of confrontation on a Hurstbridge line train with a ‘Lebanese Muslim’ gang as alleged, but if it did occur, it must have happened several hours — not 15 minutes — prior to his death. (See also : Witness lament for teen, Andrea Petrie, The Age, December 16, 2008; Police pursue ‘suicide by cop’ angle in teen shooting death, Geesche Jacobsen, The Sydney Morning Herald, December 13, 2008.)

*”Pearls Before Swine—I’ve kind of always distrusted Richard Wolstencroft, filmmaker, Melbourne Underground Film Festival director, and tedious bore, partly because of his avowed fascist tendencies. Now that I’ve paid money for and sat through his fucking film, I just want to beat the cunt senseless.”

Meanwhile, the assistant state police commissioner, clearly a deserving accomplish [sic] of his liar boss, has defended the police assassination of the youngster claiming the assassins “had only seconds to react” when evidently 3 grown men have many options to react to a youngster carrying 2 knives, including, but not limited to:

* Run away
* While backing off take off jacket and wrap around arm
* While backing off take off shoes and put on hand
* Attempt to calm the distressed teenager by maintaining a non-confrontational posture
* Seek to maintain a distance, while waiting for the arrival of a net to be cast upon the target
* Throw (chilli) pepper mixed with water into the face of the knife-holding target
* Countless other options including boomerangs

Meanwhile the incident is being used by many misguided ‘experts’ to call for the use of tasers – electrical stun guns – as a solution, instead of better training and a reassessment of the role of police in Australian society. Mathaba has many times in the past highlighted the danger of the use of tasers in the hands of police. A far better option would be for Australian police to seek training in the use of boomerangs and woomeras.