“Stop watching, get out onto the streets” // “Free everyone who has been arrested”

For more than a minute, about 10 youths blocked a broadcast showing a speech by Prime Minister Costas Karamanlis. Instead, they displayed banners reading: “Stop watching, get out onto the streets,” and “Free everyone who has been arrested.” No one was hurt, and no arrests were reported.

NET chairman Christos Panagopoulos claimed the protesters violently forced their way into the studio. “This goes beyond any limit,” he said…

While rioting has subsided, hundreds of high schools and dozens of universities in Greece continue to be under occupation, and much activity is still going on, both on- and off-campus. For a neat-o summary of recent events (December 6–13) in Athens “from the perspective of some proletarian participants”, see ‘Greece unrest: the story so far – TPTG’ (December 14). 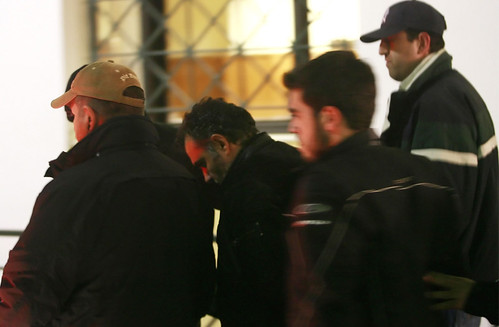 The tragic incident that led to the death of 15 year old Alexis Grigoropoulos was seen by at least 60 eyewitnesses and recorded on video (you can look it up on a multitude of sites and blogs. It’s not very clear but still it shows that cops were under no threat at all. Instead they were shouting to the boy and his friends “Come here and we’ll show you”. One of the two “officers” was grabbing his balls showing them to the boys as proof of his “manhood”…). The cop aimed with his hands extended straight in front [of him]. A friend of mine (who is a lawyer) was there and accompanied the dead boy in the ambulance together with a doctor. He told us that when the people around started screaming “help, he’s got no pulse!”, both cops turned their backs and left walking with their guns still [in their] hands.

All this was witnessed by many as 6th December was a name day (“Nicholas Day”) and the street was very crowded by people going in and out to parties and celebrations.

Mainstream media is, as always, getting their news directly from the police headquarters. Although, this time, many well known Greek journalists differentiated their personal position and reported the true facts. This only happened during the first days when everyone here was surprised by the massive rage of the people’s reaction. Afterward, all the main news channels returned to their usual order… they repeat again and again the irrationality of violence and the financial cost of the burned bank branches…

Occupations of schools, universities and city halls are still going here in Athens and in several cities all around Greece.

The truth always comes out, but not in TV screens… in the streets, where life is real and vibrant. They have tried so hard for decades to lock us up in our homes, to make us afraid of the imaginary “danger out there” by intimidating reports in the news. There is nothing to be afraid of… but indoor death.

We call you to talk about it with your comrades, friends and families. To take it to the streets with public discussions and solidarity movements.

It’s not only the political cause, it’s also the personal sentimental change that comes when we get together and live out of our daily routine.

Last 2 weeks have been the longest and most truly alive I can remember for a very long time. It’s like being 15 again!

Epaminondas Korkoneas, the 37-year-old cop accused of killing 15-year-old Alexis Grigoropoulos, is currently in prison awaiting trial. Contrary to the account given above, in his plea before the courts, Korkoneas claims he and his partner were attacked by a group of 30 youths, “who yelled vulgarities and threw rocks, sticks, bottles, metal ashtrays, and firecrackers at them”, which forced the pair to leave. Upon returning — for reasons which are not entirely made clear — they were attacked with molotovs; his partner fired a flash grenade, and Korkoneas fired two or possibly three warning shots into the air. One of these bullets somehow ricocheted into the chest of Alexis, killing him. The two cops were unaware of Alexis being shot, and at that point simply left to return to the local cop shop.

“Everybody knows this is a big lie,” taxi driver Spiros Papadopolos said with disgust. “But this is how things are in Greece. For sure, the policeman won’t be jailed. It has happened many times before.”

Korkoneas is a ‘Special Guard’, a former soldier, and a former member of the neo-Nazi group Chrysi Avyi (Χρυσή Αυγή) / Golden Dawn (a group which is occasionally recruited by Greek police in order to help repress public protests, including those following Alexis’ murder). From Kalamata, Korkoneas has impeccable fascist credentials. During the German occupation of Greece in WWII, his family participated in various pro-Nazi gangs (known by the derisive term Germanotsoliades or Tagmatasfalites). During the Greek civil war, members of his family joined the criminal gangs of “Maganas” and “Katsarea”, which took part in massacres in the Kalamata region following the Várkiza agreement (February 1945).

November 1980. New Democracy in power. Mass demonstrations. Stamatina Kanellopoulou, aged 21, is bludgeoned to death by a policeman’s baton. Cypriot student Iakovos Koumis, 26, is killed by a bullet. The promised “exhaustive investigation” and “exemplary punishment of the guilty parties” were nothing but empty words. The guilty parties were never found, and the country’s security forces got the message that they enjoyed impunity.

November 1985. PASOK in power. Exarchia. Police officer Athanasios Melistas kills Michalis Kaltezas, shooting the 15-year-old in the back of the head. Minister Menios Koutsogiorgas submits his resignation, as a formality, but it is not accepted by Prime Minister Andreas Papandreou. Melistas is convicted by the first instance court to two-and-a-half years in prison with the possibility of parole and is subsequently found innocent on appeal. Once again, impunity is the message that is conveyed.

In the late ’80s and early ’90s, Korkoneas was himself a member of the Golden Dawn’s ‘action group’ in Kalamata. That is, a fascist street thug. Following this, he joined the Special Army Forces (LOK), and in 1999 was one of the first to be recruited into the newly-established police ‘Special Guard’. As a Specialist, he served in Exarchia, and was well-known for his aggressive policing.

I live in Melbourne, Australia. I like anarchy. I don't like nazis. I enjoy eating pizza and drinking beer. I barrack for the greatest football team on Earth: Collingwood Magpies. The 2023 premiership's a cakewalk for the good old Collingwood.
View all posts by @ndy →
This entry was posted in Anarchism, Anti-fascism, Media, Poetry, Student movement. Bookmark the permalink.

1 Response to “Stop watching, get out onto the streets” // “Free everyone who has been arrested”