Thanks for your reply. I accept that your opinions are not necessarily shared by your colleagues or express the formal position of the Australian Centre for Democracy & Justice, a ‘non-partisan’ institution. 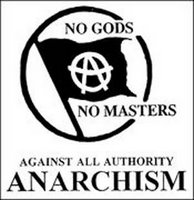 My own area of interest lies in the relationship between anarchist ideology and practice and the ‘newest’ social movements: principally, that assemblage of ideas, practices, groups, individuals and movements that come under the rubric ‘anti-globalisation’ (or, sometimes, ‘anti-capitalist’). From my own, basically ‘anarchist’ perspective (I’m a partisan!), I think that these movement/s often represent / embody an interesting re-interpretation / re-invigoration of long-standing libertarian ideologies and practices. I want to draw these together in an explanatory framework that emphasises the crucial role of anarchism in allowing for this re-articulation to take place. Secondly, to explore the impact of such movement/s to a ‘broader’ economic, political and cultural struggle for ‘public spaces’ (broadly interpreted) from which to more effectively launch (radical / revolutionary) challenges to the global structures of capital, state and patriarchy.

I ask about ‘democracy’ and ‘justice’ in particular as: 1) these lie at the centre of the ACDJ’s work; 2) such concepts are crucial in supplying an ethical framework for political ideologies; 3) their meanings and implications are the subject of ongoing debate within ‘activist’ circles (as well as scholarship) and; 4) anarchist or anarchist-inspired critiques of these concepts are important and do much to reveal what I think is distinctive in anarchist approaches to (radical) social change.

So, to your comments…

OK, by “loose association” you mean… “loose association”. Namely, a preference for listening to / performing ‘punk rock’ as a teenager = ‘anarchist’ // A brief period of membership of a ‘socialist’ (presumably, Leninist) group during undergraduate studies = ‘Marxist’.

There’s not much for me to add, I think, other than to suggest that this is not, in my experience, an atypical account of someone’s political evolution.

I’m not sure I agree that it was ‘Marxism’ that gave us either ‘historical determinism’ or ‘class-based analysis’. The way I see it, Marxism — classical or orthodox Marxism at any rate — represents a certain interpretation of these two concepts, and, moreover, an elaborate theoretical justification for a particular political program centred on the conquest of state power by the proletariat. Historically, it developed in explicit opposition to anarchism; anarchism and Marxism at one point being the two principal theoretical tendencies within the modern labour movement.

(As an aside: it often strikes me that thinkers like Marx are spoken of as if their practical activity was confined to their scribblings. Just as much can be learnt, I would argue, from an examination of their other, ‘practical’ efforts ((cf. Zerzan’s essay on ‘The Practical Marx’ in Elements of Refusal: “Zerzan’s real contribution is a thorough and insightful critique of leftist theory and practice. The essay ‘The Practical Marx’ is a must read for anyone whose knowledge of Marx has come through sycophantic socialist sources”)). It also tends to humanise philosophy and politics to pay attention to such matters.)

In Australia, anarchism has existed largely at the margins, although its concerns remain, I think, at the heart of contemporary politics, and its influence can be found in a range of social movements — environmental, labour, peace and women’s, for example — and even institutions.

But be that as it may…

I agree that, in its cruder versions, Marxism tends to relegate ‘culture’ to the margins (that is, ‘culture’, like ‘consciousness’ is regarded as being epiphenomenal) and is based on a crude dualism (rather than, say, dialectic). It’s interesting that you should raise Gramsci in this context as a recently published book by Richard J. F. Day — Gramsci is Dead: Anarchist Currents in the Newest Social Movements — is dedicated to critiquing the concept of ‘hegemony’ in light of these ‘newest’ movements. (I’m in the process of reading it now… and will most likely publish a review of it on my blog.)

I also agree that Marxism as a whole has to labour under its own rather nightmarish history: ‘actually existing socialism’ and all that. However, I have quite a different understanding of this history, as well as the role of Marxism (qua ideology) in its progression and eventual collapse. So, I think there’s at least two different issues here: one is the nature of ‘actually existing socialism’; the other is the nature of class and class society. As for the second, ‘Bourgeois and Proletarians’… well, the ‘immiseration thesis’ certainly has its problems. On the other hand, I think there’s good reasons class simply won’t ‘go away’.

But more on that later.

As for Marxism, the Enlightenment and ecology: yes, Marxism is an Enlightenment philosophy. However, by itself, I don’t see this as being a particular problem. Or, if it is, it’s one shared by all ‘modern’ (as opposed to post-modern) philosophies. As for Marxism and ecology, Capitalism : Nature : Socialism is a useful resource.

Anyway, so much for Marxism.

“Anarchy’s failure is that it is anti-state. In essence it fails the economies of scale test.”

Well… that’s a fundamental difference of opinion. If anti-statism is doomed, there’s really little point to anarchism, and it should probably be returned to the ‘dustbin of history’ to which it has been consigned (along with the counter-revolutionary Trotsky himself).

I, of course, disagree.

Chomsky’s basic point — as well as his account of his attraction to anarchism, which mirrors my own — is this:

I was attracted to anarchism as a young teenager, as soon as I began to think about the world beyond a pretty narrow range, and haven’t seen much reason to revise those early attitudes since. I think it only makes sense to seek out and identify structures of authority, hierarchy, and domination in every aspect of life, and to challenge them; unless a justification for them can be given, they are illegitimate, and should be dismantled, to increase the scope of human freedom.

But seriously. Chomsky addresses this question — which, as I understand it, is crucially concerned with addressing the presumed inability of ‘anarchism’ to tackle questions to do with large-scale technics — in this fashion:

RBR: One of the main achievements of the Spanish Revolution was the degree of grassroots democracy established. In terms of people, it is estimated that over 3 million were involved. Rural and urban production was managed by workers themselves. Is it a coincidence to your mind that anarchists, known for their advocacy of individual freedom, succeeded in this area of collective administration?

CHOMSKY: No coincidence at all. The tendencies in anarchism that I’ve always found most persuasive seek a highly organised society, integrating many different kinds of structures (workplace, community, and manifold other forms of voluntary association), but controlled by participants, not by those in a position to give orders (except, again, when authority can be justified, as is sometimes the case, in specific contingencies).

So, to put it simply, I reckon that this — in essence, the inapplicability of anarchist theories of social organisation to (post-)industrial society — is not an insurmountable problem, either theoretically or practically. (More specifically, I suggest you read Brian Martin on questions of science and technology.)

In general, I think that the problems you associate with ‘anarchism’ proceed from certain misunderstandings of its theoretical content and actual historical achievements. Thus I’ll conclude with this quote from Albert Meltzer:

Whenever Anarchists attack present-day society, they touch on the fears and prejudices of average people who know that society is a jungle today and cannot visualise life without the safeguards needed in the jungle. When they hear of Anarchism they bring forward objections which are, in fact, criticisms of the present system they do not otherwise admit but think of as objections to a Free Society of the future.

The most a functioning Government can do is not prevention but punishment — when it finds out, sometimes wrongly or not at all — who the culprits are, its own methods of repressive action can cause far more damage than the original crimes — the “cure” is worse than the disease.

“What would you do without a police force?” Society would never tolerate murder, whether it had a police force or not. The institutionalisation of a body to look after crime means that it not only “looks after” crime and nourishes crime, but that the rest of society is absolved from doing so. The reasoning is that a murder next door is the State’s business, not mine! Responsibility for one’s neighbour is reduced in an authoritarian society, in which the State is solely responsible for our behaviour.

“Who will do the dirty work?”. This is a question society, not just the apologist for Anarchism, has to ask itself. There are dirty jobs which are socially unacceptable and poorly paid, so that nobody wants to do them. People have therefore been enslaved to do them, or there is competition in a market economy and the jobs become better paid (and therefore socially acceptable), or there is conscription for such jobs, whether by political direction or the pressures of unemployment. Sometimes the capitalist introduces immigration in the hope of cheap labour, thus putting off the problem for a generation or two. Or it can be that jobs don’t get done and, say, the streets aren’t swept anymore and so we get deluged with water shooting out from cars driven by graduate psychologists and step gingerly past refuse, clutching our theses on sociology.

What the State does in such circumstances seems to depend on political factors. What an Anarchist society would do could only be foretold by a clairvoyant. It is plain what it could not do — use force, since it would lack repressive machinery or the means of economic coercion. The question implies a criticism of prosperity and freedom, which bring problems in their train. Are we to reject prosperity and freedom for that reason?

“If the Anarchists do not seize power, and have superseded other forms of socialism that would, they objectively make way for fascism”. This allegation presupposes the dilution of anarchism with pacifism, for there is always, in any circumstances, one sure way of avoiding dictatorship, whether from the right, left, centre or within one’s own ranks, and that is by personal removal of the dictator. This only becomes a symbolic gesture when the dictator is in power with all the machinery of command-and-obey at the disposal of the head of State.

Anyone will seize power if given the opportunity. Anarchists do not claim to be a privileged elite and cannot truthfully assert they would be better able to resist the temptations of power, or to wield it more successfully, than anyone else.

I live in Melbourne, Australia. I like anarchy. I don't like nazis. I enjoy eating pizza and drinking beer. I barrack for the greatest football team on Earth: Collingwood Magpies. The 2021 premiership's a cakewalk for the good old Collingwood.
View all posts by @ndy →
This entry was posted in Anarchism. Bookmark the permalink.