January 26, 1788 : The day Captain Arthur Phillip and the First Fleet arrived at Port Jackson (landing at Camp Cove), in order that King George III’s loyal servant might declare the establishment of a British penal settlement. Arfur arrived with 717 convicts on board (of whom 180 were women), “convicted of crimes in the Country of England since 1783 and … sentenced by His Majesty’s Judges to be sent to that part of New Holland known as New South Wales”, guarded by 191 marines under 19 officers. (NB. Accounts vary as to exact numbers.)

Three cheers and a loud huzzah for King George!

Long may He reign! 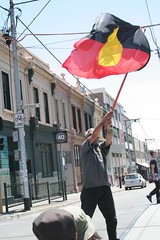 A march will start from the front of the Fitzroy Stars Gym (184 Gertrude Street, Fitzroy) @ 11am on Monday, and make its way to the Share the Spirit concert @ Treasury Gardens (Spring Street, City).

The Treasury Gardens is set to come to life with a musical explosion of rock, roots, reggae and hip hop at Melbourne’s premiere Aboriginal and Torres Strait Islander Music Festival, Share the Spirit, on Monday 26th January.

Payback Records was established by Essendon footballer Nathan Lovett-Murray twelve months ago to create opportunities for young and talented indigenous hip hop artists to make their way in the music industry. At Share the Spirit, Melbourne audiences will have the unique opportunity of catching some of Australia’s best underground hip hop musicians on the one stage.

The festivities will kick off at 2pm with a Welcome to Country and Healing Ceremony, which will be followed by a spectacular fire dance performance by the Koori Youth Will Shake Spears and a smorgasbord of non-stop music.

Share the Spirit also plays host to the colourful Koori Market – where Indigenous artists and designers will be selling their locally made crafts, boomerangs, traditional artefacts, t-shirts, bags, CDs, homewares, photography, art and much more.

Once the sun goes down and the music stops, festival goers can continue to kick their heels up at the official after party at Section 8 in the city.

Presented by Songlines Aboriginal Music Corporation and proudly supported by the City of Melbourne, Share the Spirit is a day that has been created by Aboriginal People for all Australians to come together and celebrate the beginning of the post-Apology era.

NATIONAL, January 22, 2009: Astute media watchers may have noticed that over the weekend, the Rudd government began hastily promoting Australia Day 2009 as having ‘special significance’ to Indigenous people.

On Sunday, CEO of the Australia Day Council, Warren Pearson hit the media hustings with a message of unity: “We’re calling on all Australians to reflect on what we’re getting right as a nation and to get to know other cultures in the nation, particularly Indigenous culture, because Australia Day can be an important process in the reconciliation movement,” he said.

Which is of course complete horsesh*t. Reconciliation has as much to do with Australia Day as cancer does with snips and snails and puppy dog tails.

The official spin (and it’s quite a stretch but bear with me) goes something like this: Because the national apology to the Stolen Generations was delivered in February last year, and this Australia Day will be the first one since, that makes it a really, really special day for black people.

For reasons that should be blindingly obvious, January 26 is never a ‘special day’ for Aboriginal people, and never will be. Regardless, the story got a small run in mainstream media this week. And here’s why it has suddenly emerged as an issue…

I live in Melbourne, Australia. I like anarchy. I don't like nazis. I enjoy eating pizza and drinking beer. I barrack for the greatest football team on Earth: Collingwood Magpies. The 2021 premiership's a cakewalk for the good old Collingwood.
View all posts by @ndy →
This entry was posted in Art, History, Music, State / Politics. Bookmark the permalink.