“Alan, it’s not just a few Anglo bastards on Australia Day, it’s millions. Australia is a very big country and it’s been taken over by this scum. It’s not a few causing trouble. It’s all of them.” 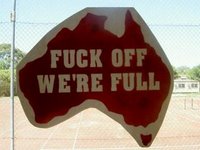 The antics of somewhere between 80 and several hundred teenage boys on Manly beach on Australia/Invasion/Survival Day (January 26) has triggered some inevitable expressions of anguish over Australia, yoof, and the uses to which yoof put the Australian flag. Inevitable too, the drawing of comparisons with the violent racist outburst at Cronulla beach in 2005. In 2009, however, the odds were far less favourable for the young patriots: 80:1 as opposed to 5000:1. Nevertheless, the boys did succeed in wounding a teenage girl (of Asian descent), as well as frightening a lone taxi driver (a Sikh), a few (non-White) shopkeepers, and a number of local families with children.

Enough to make any digger’s heart swell with pride.

Naturally, ‘outsiders’ are being blamed for the troubles — many of the yoof supposedly came from suburbs other than Manly. By the same token, local police are keen to play down the significance of the teenagers’ antics.

However, it may be that the general public is becoming rather tired of the notion that being a (White) Australian and carrying a flag entitles you to act like a complete arsehole — or that having chosen to be born to non-White parents is a moral failing deserving of abuse, ridicule, or even physical assault.

More broadly, draping such dickheaded behaviour in the Australian flag does not bode well for the continued celebration of the Australian nation on January 26 (the day in 1788 that the British Empire landed in Australia), and reinforces calls for a day of nationalistic feeling to be moved to some other date. This won’t happen overnight — PM KRudd has already made that very clear — but it may well be inevitable.

Each January 26, Australians gather in parks and on beaches to celebrate all that is great about their country: mateship, sunshine, barbecues and free-flowing beer.

But this year, across the country’s most populous state, the day of national pride turned violent when groups of youths rampaged through suburbs targetting non-white shopkeepers in a display of racism that echoed the ugly scenes of the 2005 Cronulla riots.

In the affluent Sydney suburb of Manly, where hundreds of families had set up their picnics for the day, more than 100 shirtless young men draped in “Aussie pride” flags smashed car windows and vandalised shops.

Carrying signs that read “- – – – off we’re full”, they paraded up and down the [seafront] threatening bypassers.

One 18-year-old Asian woman was injured when the gang smashed her car window, showering her in glass and causing several cuts to her arms.

There were also reports that the group attacked a taxi driven by an Indian Sikh and an Asian shopkeeper.

In scenes reminiscent of the Cronulla riots, when 5,000 white Australians congregated in the Sydney beachfront suburb and attacked Lebanese immigrants [sic], groups of men jumped on cars that were stopped at traffic lights and chanted racist slogans to the terrified passengers.

NB. Those targetted for violence in Cronulla on December 11, 2005 were all those deemed to be insufficiently ‘White’ (of ‘Middle Eastern’ appearance). This included presumed Lebanese-Australians, but also a handful of students from Bangladesh, among others, while some police and ambulance workers who came to the assistance of victims were also attacked. “Commissioner Ken Moroney says an ambulance officer was attacked while transferring an injured person and the crowd turned on a woman because of her race. “That woman was saved, literally saved by the police officers and those officers deserve my highest commendation for the way in which they went about their task,” he said.

At one point the gang was reportedly heard singing “lets go – – – – with these Lebs”.

Animosity towards Lebanese-Australians is a trait also shared by members of the ‘Southern Cross Soldiers’. At least 30 members of this volunteer army (according to the Soldiers themselves, as many as 100) gathered on Melbourne beaches to celebrate Australia Day.

Jean Hay, the mayor of Manly, said the youths came from the north-west of Sydney and were not Manly residents.

The unrest was brought under control by the late afternoon. Police charged a 16-year-old for assaulting police and three others were cautioned for offensive and dangerous behaviour.

The violence in Manly was mirrored in the coastal towns of Shellharbour to Sydney’s south and Port Macquarie to the north. Fights were also reported as far north as Queensland’s Gold Coast, where hundreds of teenagers clashed on a popular family beach.

I live in Melbourne, Australia. I like anarchy. I don't like nazis. I enjoy eating pizza and drinking beer. I barrack for the greatest football team on Earth: Collingwood Magpies. The 2021 premiership's a cakewalk for the good old Collingwood.
View all posts by @ndy →
This entry was posted in State / Politics and tagged Fuck Off We're Full!. Bookmark the permalink.