“No offence but honestly who gives a shit about some [journalist] in Russia.” ~ Nowave, Melbourne Punx Forum

A young female journalist who was gunned down last week on a busy Moscow street was buried on Monday in her home city of Sevastopol in the south of Ukraine.

Several dozen mourners bade a last farewell to Anastasiya Baburova, a 25-year-old intern reporter for the opposition newspaper Novaya Gazeta, after her body had been taken home by plane.

Baburova was shot dead on January 19 alongside leading Russian human rights lawyer Stanislav Markelov, who had just given a news conference protesting the release of a Russian army colonel convicted of murdering a Chechen girl.

The funeral mass was held in the Saint Vladimir Orthodox Cathedral in the centre of the Crimean port city before her corpse was laid to rest in a cemetery on the city’s outskirts.

Her mother, Larissa Baburova, told AFP that her daughter a year ago had complained that her work was too dangerous, saying: “Mum, I am not going to live long like this.”

The European Union and France had raised concerns after her killing but a Russian foreign ministry official said the slaying of Baburova had been “artificially politicised and used to discredit Russia”.

The newspaper – one of the few Russian publications ready to explicitly criticise the Kremlin – had already been hit by tragedy when its star reporter Anna Politkovskaya was gunned down in Moscow in 2006.

Police said that no witness has come forward over the murder but that security cameras had recorded images of the suspected killer, a tall, thin man wearing a mask. 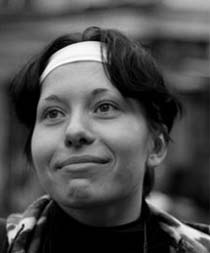 AFP earlier reported that “About 200 people also gathered in Moscow to protest the killings of Markelov and the journalist, Anastasiya Baburova, a 25-year-old intern reporter for the opposition newspaper Novaya Gazeta“. “Russia is the third-deadliest country in the world for journalists, according to CPJ research. Since 2000 alone, 16 journalists have been murdered in Russia in direct retaliation for their work; only in one of these cases–Domnikov’s–have the killers been convicted. In all 16 cases, however, the masterminds remain at large” (Journalist, human rights lawyer shot dead in Moscow, Committee to Protect Journalists, January 20, 2009). Baburova is the fourth Novaya Gazeta journalist killed since 2000.

As a result of her murder, ‘Russian newspaper to seek arms licenses for its journalists’ (January 22, 2009): “MOSCOW, January 22 (RIA Novosti) – The Novaya Gazeta newspaper will ask Russia’s Federal Security Service (FSB) to issue arms licenses to its staff after one of its journalists was shot in broad daylight in downtown Moscow, a co-owner of the daily said on Thursday.” A previous request was denied. The Moscow police chief has already indicated his opposition.

20th of January in Moscow, St. Petersburg and Grozniy various actions were organized to commemorate Stas Markelov and Anastasiya Baburova, murdered 19th of January. At noon around 400 people gathered at the place of murder to leave flowers. Police and several buses of OMON riot police were present at the spot, but eventually they did not intervene.

Moscow anarchists decided, that candles and flowers are not enough of a reaction against such an outrageous murder, thus they decided to organise an illegal demonstration.

First gathering place was leaked to police, and it was surrounded by a tight cordon of OMON. Eventually gathering place was moved to Bolshoy theater, but police got there as well, around 7:30 PM they attacked peaceful people. Around 15 people got arrested, few more were arrested at the metro station “Okhotniy Ryad”, rest of the people moved to exit of metro Novokuznetskaya.

From there, march was launched 8:20 PM, and it blockaded Pyatnitskaya street. March went to Obvodnaya canal proceeded by embankment, from there demonstration moved to Bolshaya Ordynka street, blocking it.

People scanned “Fascists murder, authorities are covering!”, “We do not forget, we do not forgive”, “Our motherland is the whole humanity”, there were banners “No to impunity” and “Fascist murder, authorities are covering”. Trash containers were thrown to street to stop traffic. In end of the march, few bank windows and windows of McDonald’s at metro Tretyakovskaya were trashed. Altogether around 200 people joined demonstration.

During the action, around 50 people altogether got arrested, good part of them random passers by, but it seems everyone got released without charges during the same evening.

Text of the leaflet is available in Russian, but it could not be distributed in action as whole printout got confiscated before it got started.

In St. Petersburg, around 100 people gathered at Ligovskiy street 7 PM. This was openly announced action and police attempted to stop it, however people managed to launch march towards Marsova fields, where is a memorial to victims of white terror. There a small meeting was organised.

There was also a rather strange demonstration in Chechnya. This was officially sanctioned by the authorities, and among human rights organizations there were such strange entities such as “Fan Club of Ramzan Kadyrov”. It was reported, that more than 1000 people joined demonstration. Stas and Nastya were definitely no fans of current totalitarian regime in Chechnya, however Stas was defending interests of relatives of victims in two most prominent Russian war crimes courts. Whereas current Chechen regime is not too keen to punish their own power structures for human rights violations, they pursue course of prosecuting non-Chechen officials of Russian army for reasons of public relations, and also to erase from the republic all federal structures not directly subordinate to the current regime.

According to the above accounts, around 250 people protested in Moscow, 100 in St. Petersburg and 1000 in Grozny. At the Moscow protest, busloads of special police were present, and many protesters were detained, including ‘suspicious’ passers-by. It is not known if any were charged. However, some were tortured while in custody, and also threatened with having drugs planted on them. Trash bins and sundry other items were used to block a road in Moscow, a road used mostly by wealthier citizens (the beneficiaries of Putin’s regime). At least one protester was badly beaten by police, and police are stitching up a criminal case against him for assaulting police.

I live in Melbourne, Australia. I like anarchy. I don't like nazis. I enjoy eating pizza and drinking beer. I barrack for the greatest football team on Earth: Collingwood Magpies. The 2021 premiership's a cakewalk for the good old Collingwood.
View all posts by @ndy →
This entry was posted in Anarchism, Anti-fascism, State / Politics, War on Terror. Bookmark the permalink.