random notes on a sunday

I’m taking a break from blogging for a short while — maybe a week or so. In the meantime, please to enjoy the following: 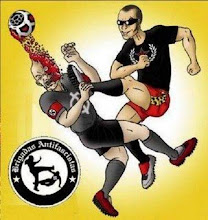 “Bohemian’s mascot is a kangaroo, the legacy of a 1927 tour of Australia. Following the tour, the club was awarded two live kangaroos, which they donated to the Prague Zoo.”

Bohemians 1905 Prague are alright. So too world-champion beaters FC St Pauli, what got promoted to the Bundesliga, as ‘Red light buccaneers back in the big time’ (Reuters, May 20, 2010).

No God No Master is the title of a new film *ing David Strathairn and documenting anarchism in 1920s New York City. It’s still in post-production. In other news:

Ah, Greece. Inspiration for so much culture. Word on the street is that The Tyrannicides of Exarcheia: Wog Boy 3 is now in its planning stages, and is being co-scripted by Chris Anastassiades, Nick Giannopoulos, and the “Initiative of Exarchia Residents”.

“The protesters want change; dogs are designed to help them.”

It was Dreamtime at the ‘G last night. “In February 2010, the Government launched Learn Earn Legend! — a message that focuses on encouraging and supporting young Indigenous Australians to stay at school, get that job and be a legend for themselves, their family and their community.”

The imperialists are working hard to benumb the independent thinking and consciousness of the popular masses and keep them as their permanent slaves. In capitalist countries a large number of working people are denied even the elementary right to existence and their rights are ruthlessly violated. The exploiting class in capitalist society is mercilessly trampling down upon the independent wishes of the popular masses and more harshly oppressing and exploiting them as it is exercising unlimited rights with all powers and means of production in its hands. As long as the reactionary exploiting system and class are left intact, the popular masses can neither enjoy genuine freedom and happiness nor keep themselves alive. Only when the capitalist society, the exploiting system, is toppled down, can the working people the world over exercise their right as the independent human beings and play their role as the builder of the world.

Do not be taken in by the deceptive farce of the marie claire seeking to benefit from the misinformation about the “north wind”!

See also : PyongyangTrafficGirls.com. “Dedicated to the world-renowned trafficwomen of the DPRK.”

World-renowned trafficwomen of the DPRK are deeply moved by General Secretary Kim Jong Il’s meticulous care for them.

Croissants and Roses – New Labour, communalism, and the rise of muslim Britain
Aufheben
No.17, 2009

“An account and analysis of the rise of communalism, multiculturalism and the creation of the British “Muslim Community” under New Labour.”

Reads a little bit like a Marxist critique of Australian Multiculturalism™ from the 1970s or ’80s.

“Lighting ideas on fire and throwing thoughtbombs since 2009!”

Art. LOL. In 2007, French corporation JC Decaux wanted to obtain a license from the Victorian Government to pollute moar public space with advertising — in exchange for bicycles. The proposal was presumably discussed in the Whorehouse of Representatives, but I’m unsure if it was approved.

An overview of the recent antics of Blood & Honour’s (very) friendly rivals belonging to the Canadian Volksfront franchise. I dunno what the boys belonging to the Australian franchise have been up to of late, but hopefully they’re continuing to be inspired by Viking power rock ‘n’ roll, and along with their Kameraden in the New Right (Australia and/or New Zealand), keeping the “jewish filth” in their place.

I live in Melbourne, Australia. I like anarchy. I don't like nazis. I enjoy eating pizza and drinking beer. I barrack for the greatest football team on Earth: Collingwood Magpies. The 2023 premiership's a cakewalk for the good old Collingwood.
View all posts by @ndy →
This entry was posted in Uncategorized. Bookmark the permalink.

3 Responses to random notes on a sunday