On Saturday, January 31, at 6:00 p.m. a heavily armed commando unit of the Oaxaca state police went into the San Pedro Pochutla prison and took our indigenous comrade and political prisoner Abraham Ramírez Vásquez away in a white van with no license plates to an unknown address. 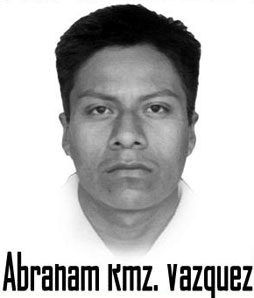 Abraham and two other indigenous men, Juventino and Noel García Cruz, have been held prisoner since January 15, 2005, under the direct orders of the murderer Ulises Ruiz Ortiz (URO). Our comrades’ crime was defending their forests and their traditional practices and customs. For more than 4 years, the URO government has been unable to prove that they committed the crimes they are accused of, and accordingly, they have not been sentenced.

Our comrades are members of the Committee for the Defense of Indigenous Rights (CODEDI) of Santiago Xanica, a member organization of the Magonista-Zapatista Alliance (AMZ), the Popular Assembly of the Peoples of Oaxaca (APPO), and adherent to the Other Campaign.

It’s important to note that Abraham Ramírez is a man of deep libertarian and human convictions, which have motivated him more than once, even from inside the prison, to struggle against the prison authorities for prisoners’ rights.

During all these years, Abraham has stayed in contact and written letters encouraging the people of Oaxaca to resist and not to allow their dignity to be trampled on by the killer who misgoverns this state. Prison bars have not been able to silence his rebellious voice, and he and the other two comrades held prisoner with him have sent letters and greetings to several different events initiated by the Other Campaign.

Abraham is also directly involved in the organization of a popular kitchen inside the Pochutla prison due to the fact that the prisoners have no dining room in this prison. This activity has lead to harassment, hostility, and acts of aggression against him by prison authorities.

In view of this situation, we ask for the sensibility and solidarity of the Mexican people and social organizations to demand that the killer Ulises Ruiz Ortiz and the right-wing Calderón government immediately present our comrade Abraham Ramírez Vásquez alive and that they release all the political prisoners of Santiago Xanica.

We hold the prison warden, the governments of Ulises Ruiz and Felipe Calderón responsible for any attempt against our comrade Abraham.

FREE ALL POLITICAL PRISONERS OF MEXICO AND THE WORLD!

In Melbourne, on the weekend of February 20, 21, and 22, the Latin American Solidarity Network / Red de Solidaridad con los Pueblos Latinoamericanos (LASNET) will be holding a Zapatista Film Festival. Details have yet to be confirmed, but the event will be held at the International Workers’ Club, 62 St Georges Road, Northcote, and expected price of admission will be $10 for all three days. Films to be screened include:

See also : Angry White Kid: Mexico | The Other Journalism With The Other Campaign “On The Road with Zapatista Subcomandante Marcos and the Simple and Humble People Who Fight” (Narco News) | Mexico-Australia Solidarity Network (MASN)

I live in Melbourne, Australia. I like anarchy. I don't like nazis. I enjoy eating pizza and drinking beer. I barrack for the greatest football team on Earth: Collingwood Magpies. The 2023 premiership's a cakewalk for the good old Collingwood.
View all posts by @ndy →
This entry was posted in Film, State / Politics. Bookmark the permalink.