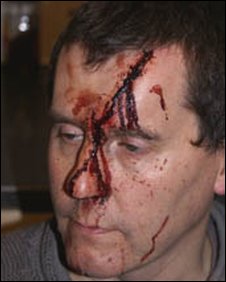 A British National Party (BNP) member was attacked with a hammer when protesters arrived at a campaign event in Greater Manchester.

Violence broke out as 30 people surrounded a BNP vehicle outside the Ellesmere Pub in St Helens Road in Leigh on Friday evening, said police.

Tony Ward, 48, was hit with a hammer and later treated in hospital.

A 25-year-old man arrested on suspicion of causing grievous bodily harm has since been given police bail.

Officers arrived at the pub to discover the BNP’s trailer had been overturned, said a police spokesman.

A traffic diversion was put in place on St Helen’s Road, while the trailer was removed and the road was closed. It has since reopened.

One witness told BBC News: “They had hammers and they smacked the vehicle to pieces, smashed all the windows and tore off the bumper, completely decimated it.

“I was shocked at what I saw.”

A BNP fundraising event had been due to take place at Pure nightclub in Leigh, but it was cancelled at the last minute.

Simon Darby, the party’s deputy leader said: “This was a violent attack by a group of thugs in which one of our members was badly injured.

The BNP’s Nick Griffin has been in the area to host the event, said Mr Darby.

The attack has been blamed on a “racially mixed group of Labour Party thugs” (BNP); “a group of Searchlight and UAF inspired thugs”; “SWP thugs” and who-knows what-else. (I suspect the involvement of 20–40 Kiwi anarchists.) Antifa England provide the following headline: “BNP’s Tony Ward Gets The Message Hammered Home–Fuck Off BNP!”

Violence erupted when BNP supporters and protesters clashed outside a Wigan pub.

One man – BNP member Tony Ward, 48, – was hit on the head with a hammer during the incident outside the Bridgewater Arms in St Helens Road, Leigh.

Eyewitnesses claim that BNP supporters and anti-BNP activists fought during what had begun as a peaceful protest against the party’s plan to hold a meeting at a town centre nightclub.

He said: “The peaceful demonstrators were terrified. There were some youngsters and women among the group, some of them were clearly scared and fled.”

Accounts differ but eyewitness reports suggest that a number of BNP activists, travelling in a four-wheel-drive and towing a trailer, confronted the protesters who had gathered on St Helens Road.

It is believed that they were, in turn, confronted by anti-BNP activists, some of whom were armed, and who were apparently separate from the protest group.

Police were called to the scene shortly before 6.30pm following reports of a fight and discovered a trailer had been overturned.

During the incident Mr Ward was hit with a hammer. He attended hospital for treatment, but was not seriously injured.

A 25-year-old man has been arrested on suspicion of causing grievous bodily harm and bailed until May 26.

The protesters had gathered in Leigh after it emerged towards the end of last week that party members intended to hold a meeting at the Pure Club in West Bridgewater Street.

It is believed some were students and others were members of various political parties, including Respect and the Socialist Workers Party.

BNP leader Nick Griffin had been scheduled to speak at the Battle for Britain road show meeting.

But it was cancelled at the last minute when, according to police, the venue’s owner changed his mind, fearing negative publicity and public order trouble for him and other businesses. Mr Franzen, who joined the protesters just after the incident erupted, said the BNP are not welcome in Wigan.

He said: “They are not welcome anywhere. We know who they are and what they stand for and we know that their new found respectability is just a façade.”