The I Know I’m Not Alone screening with a performance by Michael Franti sold out. But ha! I was there [thanks Eleven!]. Anyway, the film’s great — it even features an Iraqi rock band called Black Scorpion and some Palestinian hip-hoppers! Oh, and Franti’s performance was also… great.

This film came out of my frustration with watching the nightly news and hearing generals, politicians and pundits, explaining the political and economic cost of the war in the Middle East, without ever mentioning the human cost. I wanted to hear about the war by the people affected by it most: doctors, nurses, poets, artists, soldiers and my personal favorite, musicians. So I bought some plane tickets and headed to Iraq, Israel and the occupied territories of Palestine. I was joined on the trip by several friends who wanted to see the war first hand as well: two human rights lawyers, my manager, a drum tech, a retired U.S. Army captain and a beauty salon owner (just for good measure).

See Also: A Family in Baghdad 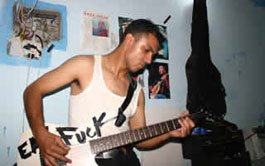 I live in Melbourne, Australia. I like anarchy. I don't like nazis. I enjoy eating pizza and drinking beer. I barrack for the greatest football team on Earth: Collingwood Magpies. The 2020 premiership's a cakewalk for the good old Collingwood.
View all posts by @ndy →
This entry was posted in Film, Music, War on Terror. Bookmark the permalink.
Login