The Mad Monk tries and fails to kill the albatross that is/was ‘WorkChoices’, bravely battling the reality that it won’t be until after Labor’s next term in office that the ill-will the scheme generated will dissipate — by which time, it’s also likely he’ll have been demoted for being too unpopular among the ladies. Speaking of which, Cath Bowtell is the lollipop lady taking over from Lindsay Tanner and taking on law-talking guy Adam Bandt in the seat of Melbourne, a marginal undertaking quite possibly falling victim to the disease Paul ‘I Was A Teenage Trotskyist’ Howes has identified as turning Green into Red:

[The Greens are] being infiltrated by many whose commitment to the environment is questionable, and who are more focused on turning the Greens into a left-wing, socialist-style party. Some people call these Greens “watermelons” – green on the outside, red on the inside.

[Lee] Rhiannon is one of those. In fact, if you look back at her 11 years on the comfortable red couches of the NSW Legislative Council, not much has been said by her on Green issues, but she has spent a lot of time talking about issues not dissimilar from those she campaigned for when she was an active member of the Stalinist Socialist Party [now better known as the Communist Party of Australia].

Rhiannon’s “watermelon” faction of the Greens is growing in strength. They are increasingly flexing their muscle through their base in the inner-city Green branches against the traditional “true” Greens such as [Bob] Brown.

Howes has a point: certainly, nobody could mistake Labor for being “a left-wing, socialist-style party”, especially when they have enough trouble distinguishing it from Another Liberal Party. “Clearing the decks of difficult issues has dominated Julia Gillard’s brief prime ministership so far. First the mining tax, then asylum seekers. She did a deal on the first, and helped herself to a reworked version of Coalition policy on the second.” (See also : Real chance for Greens in historical Labor bastion, Farah Tomzin, The Age, July 19, 2010.)

‘Making tracks nightly’ (Katherine Murphy, The Age, July 19, 2010) is a nuts ‘n’ bolts account of the Labor machine in action. Among the many gems of electoral wisdom to be gleaned from the article is the observation that “Polling is an evolving art, and online is playing a greater part in the overall enterprise”. In which context: Adam Bandt has 895 followers on Twitter; Cath Bowtell has 162. 2,540 people like Adam Bandt on Facebook, while 265 people like Cath Bowtell. 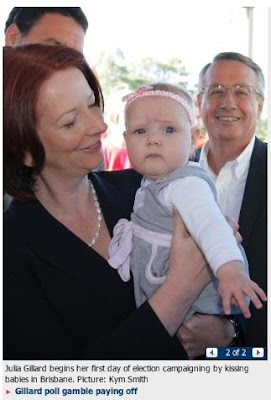 Bonus KRudd! A Sweary Blast from the Past

I live in Melbourne, Australia. I like anarchy. I don't like nazis. I enjoy eating pizza and drinking beer. I barrack for the greatest football team on Earth: Collingwood Magpies. The 2020 premiership's a cakewalk for the good old Collingwood.
View all posts by @ndy →
This entry was posted in Death, State / Politics and tagged 2010 Australian Federal election, Adam Bandt, Cath Bowtell. Bookmark the permalink.