A wambulance for Call the Paramedics 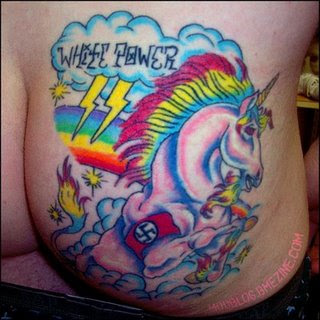 From the Department of But-Some-of-My-Best-Friends-are-Black-Jewish-Lesbians-with-Disabilities:

The fella with the white power unicorn tattoo on his arse is called Mike Beer. Mike plays in a band called Call the Paramedics, who like to play with boneheads in Atlantic City. Sadly for Mike, his band, and their boneheaded fans, not everybody appreciates either their sense of humour or their choice of friends, and so their latest tour has been cut rather short.

Memo to Call the Paramedics: when you hang out with Nazis, the last thing you want to do is thank us for the publicity. Because we have a funny way of saying “You’re welcome”! The band was supposed to play the North Star Bar tonight, but the club just put this announcement on their site that the show isn’t happening. That means the band has lost a total of five shows, with only a gig in Virginia Beach and another late August again in Philly. The club is citing a request from law enforcement for the shutdown, and that is REAL curious to us. Add the fact that newspaper articles are being written about those Nazi connections, and we have ourselves a band officially being called out by more than just some local antifa – and that is a bad thing for them! Again, you’re welcome. Let us know if you want more publicity! We will keep you posted on further developments.

Locally, neo-Nazi impresario Gareth Sansom appears to have packed up shop with ‘White Noise Productions’, or at least ended the pretence of being a non-fascist promoter, declaring that WNP is “a strictly not-for-profit initiative aimed only at promoting the cause of White Australian Nationalism” (neo-Nazism). The bands WNP now ‘promotes’ are the openly neo-Nazi Death’s Head, Fortress, Ravenous and Spear Of Longinus, and the moar closeted Adamus Exul, Gospel of the Horns, Lustration, Sanguinary Misanthropia, Shackles [see below], Shrapnel, Urgrund and Vomitor. Sansom was interviewed in December last year by fellow neo-Nazi Taigen Gould — whose own political loyalties are evident in his email address: [email protected]

[NB. Matty of the band Shackles has stated (June 2012) that his band split in 2009, prior to WNP becoming openly neo-Nazi. That is, while Shackles was promoted by WNP, at the time the band had no knowledge of WNP’s political base or subsequent evolution into an unashamedly neo-Nazi propaganda unit.]

I live in Melbourne, Australia. I like anarchy. I don't like nazis. I enjoy eating pizza and drinking beer. I barrack for the greatest football team on Earth: Collingwood Magpies. The 2020 premiership's a cakewalk for the good old Collingwood.
View all posts by @ndy →
This entry was posted in Anti-fascism, Music and tagged Blood & Honour Australia, Blood and Honour Australia, Call the Paramedics, Justin O'Brien, Mike Beer, white power unicorn tattoo. Bookmark the permalink.

14 Responses to A wambulance for Call the Paramedics