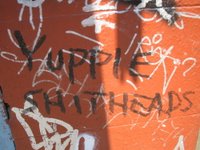 I’ve been neglecting the student right. Here it is. (Or parts of it.) Counter-protesting. (Or planning to.) A ‘national day of action’ on April 11 in protest at the impending introduction of VSU. Peter Campbell, eat ya heart out.

Young Libs are blocking streets with block letters
The Sydney Morning Herald
April 13, 2006…”Dear Liberal Student,” came the instructions from Timothy Andrews, federal secretary of the Australian Liberal Students’ Federation. “This will be a great opportunity for us to annoy the left, show the media that many students DO support VSU, and, most importantly, have a great time.”

…”THE RULES. Due to the large media presence, and the nature of what we shall be doing, please keep in mind the following things:

1) DO NOT attempt to provoke any violence or aggression from the left. We are going to annoy them enough by being there.

2) DO NOT make any comments which may be construed as personally offensive. We attack policy, not the person.

3) FOLLOW ALL INSTRUCTIONS given by ANY member of the Liberal student executive without question. This is vital, particularly if there is the possibility for a confrontation to occur.

4) MOST IMPORTANTLY, NO ONE is to speak to any members of the media whatsoever … If any member of a Liberal club is found speaking to the media, they shall be IMMEDIATELY expelled … Furthermore, if they are a member of the Young Liberals, they may face disciplinary action up to, and possibly including, expulsion from the Liberal Party.”

There followed, of course, in the finest of university traditions, free drinks on the club.

The missive was signed: “Yours in liberalism.”

The police signed their repressive with 24 arrests.

I live in Melbourne, Australia. I like anarchy. I don't like nazis. I enjoy eating pizza and drinking beer. I barrack for the greatest football team on Earth: Collingwood Magpies. The 2021 premiership's a cakewalk for the good old Collingwood.
View all posts by @ndy →
This entry was posted in Student movement. Bookmark the permalink.