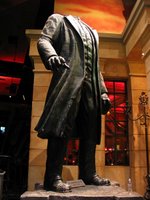 I stumbled across the following passage, taken from an otherwise unremarkable resignation letter written by a small group of Trotskyists, and thought it deserved some sort of a reply. That — and reading a post by a soon-to-be-unemployed blogger — gives me all the excuse I need (I hope) to take another jaundiced (yet also strangely joyous) look at the student movement. Anyway, here’s the passage:

The bunkered, sectarian approach of the 1980s IS and of Socialist Alternative today makes it impossible for a [socialist] group to take seriously these [political/social] openings [for building the party]. Nowhere is this so clear as in the student movement. The graduation or withdrawal from activity of a whole layer of old leaders of the independent left has left a hole[?]. That gap poses problems but also opportunities for socialists. [But] instead of a patient and comradely approach seeking to win sections of the independent left [to the party and its political program], the SA leadership has sought to antagonise and terrorise them [!] into accepting SA’s positions. This has only served to drive some [students] into the arms of a handful of anarcho-sectarians among the independent left. We cannot continue to allow this to go on without actively resisting it.

Pffft. Bring it on ‘Marc N’, ‘Shannon P’, ‘Tony B’, ‘Belgin K’, ‘Trudy McQ’ and ‘Sophie B’! I love a good argument. (Although careening from pretended ignorance to panic at the presence of anarchists on campus [eeek!] doesn’t exactly inspire confidence in your critical faculties…)

In any case, how, precisely, is this disastrous eventuality to be avoided? (Whatever we make of the (alleged) fact that a number of regiments of today’s greatly diminished Red (Student) Army have ‘gone over’ to the enemy / are cuddling into the arms of ‘anarcho-sectarians’, ‘socialists’ in Australia have never really been in a position to go Kronstadt …) For the authors of the letter, the answer to this, and no doubt many other questions, lies in continued allegiance to ‘revolutionary Marxism’ and building the revolutionary party.

Still, a belated recognition “that despite the forms, there is no democracy in SA”; that in reality, it’s an “authoritarian sect” in which the leadership — by means of an ill-conceived “hyperorganisation” (“a detailed control of many areas of members’ political activity and lives”) — seeks to dominate its followers, is, at least, a step in the right direction. And further consideration of the fact that, for some reason, the (current) SA leadership “have not felt the need to learn any new tricks [as] the old ones have worked perfectly” could even function as a stepping stone to a broader critique of authoritarian socialism. And even if this isn’t a radical critique of everything a la Mr. Marx, it could, at least, display some awareness of the anti-authoritarian implications of communist praxis. But I won’t hold my breath, any more than I expect Australian workers — if not students — to not realise, concretely, the lessons of recent French struggles against the CPE.

Speaking of students, there was another National Day of Prayer Against VSU a few weeks ago (April 12). Obviously impressed by the success of previous such prayer gatherings, 800 students in Sydney, 300 students in Melbourne and 150 students in Perth marched and chanted. In another alarming display of religious intolerance, police in Sydney arrested 26 and charged four.

I live in Melbourne, Australia. I like anarchy. I don't like nazis. I enjoy eating pizza and drinking beer. I barrack for the greatest football team on Earth: Collingwood Magpies. The 2021 premiership's a cakewalk for the good old Collingwood.
View all posts by @ndy →
This entry was posted in Anarchism, Student movement, Trot Guide. Bookmark the permalink.