…the best of times…

~ Dannie Abse (adapted from the Hebrew of Amir Gilboa), 1982 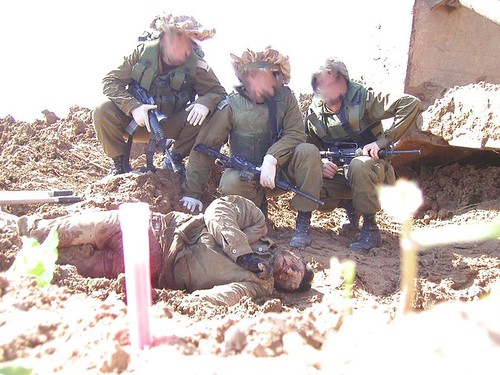 הנורמה שדובר צה”ל אבי בניהו מכחיש [“The Norm that IDF Spokesperson Avi Benayahu Wants to Deny”?] via Move Over Eden Abergil. New Facebook “Souvenir Pictures” of Bound Palestinian Civilians, The Magnes Zionist, August 17, 2010 — “When the IDF veterans group “Breaking the Silence” had its first photo exhibition in 2004, pictures like that were included. Once again, the IDF put a show of being shocked; once again nobody really cared.” — via Young IDF soldier simply does what comes naturally, Antony Loewenstein, August 18, 2010…

There is “great rejoicing at the nation’s capital”. So says the morning’s paper.

The enemy’s fleet has been annihilated.

Mothers are delighted because other mothers have lost sons just like their own;

Wives and daughters smile at the thought of new-made widows and orphans;

Small boys are delirious with pride and joy as they fancy themselves thrusting swords into soft flesh, and burning and laying waste such homes as they themselves inhabit;

Another capital is cast down with mourning and humiliation just in proportion as ours is raised up, and that is the very spice of our triumph…

But we–what are we, men or devils? and our Christian capital–what is it but an outpost of Hell?

I live in Melbourne, Australia. I like anarchy. I don't like nazis. I enjoy eating pizza and drinking beer. I barrack for the greatest football team on Earth: Collingwood Magpies. The 2021 premiership's a cakewalk for the good old Collingwood.
View all posts by @ndy →
This entry was posted in Death, Media, State / Politics, That's Capitalism!, War on Terror and tagged Eden Abergil, Israel, Palestine, The Norm that IDF Spokesperson Avi Benayahu Wants to Deny, הנורמה שדובר צה"ל אבי בניהו מכחיש. Bookmark the permalink.