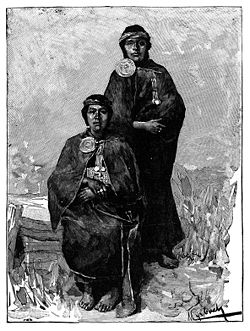 In Chile, 32 Mapuche prisoners are on a hunger strike. Their protest, which began over two months ago, is intended to highlight the use by the Chilean government of Pinochet-era anti-terror legislation to criminalise Mapuche struggles for land rights and self-determination.

SANTIAGO – Two Mapuche Indian activists freed on bail by a judge in southern Chile’s Araucania region said they will continue the hunger strike they started 65 days ago with more than 30 still-jailed comrades.

Sergio Catrilao and Pablo Canio were released Tuesday after posting bail of roughly $2,000 each.

“We will go on with the (hunger) strike until the end,” Catrilao told reporters amid a crush of family members and supporters.

Canio and Catrilao are accused in last year’s burning of a bus in Temuco, the main urban center in Araucania, where Mapuches have been torching vehicles, highway toll booths and lumber shipments as part of a campaign to reclaim ancestral lands from agribusiness and forest products companies.

The Chilean government is currently holding 106 Mapuches – most of them awaiting trial – for politically motivated crimes against property.

They remain in custody under an anti-terrorism law imposed during the 1973-1990 dictatorship of Gen. Augusto Pinochet.

The Mapuche prisoners on hunger strike demand the scrapping of the anti-terror act, which allows the state to hold people for up to two years without charges, to restrict defense attorneys’ access to evidence and to use testimony from anonymous witnesses…

The rally has been organised by the ‘Chilean Popular & Indigenous Solidarity Network’ and the ‘Latin American Solidarity Network’ (LASNET). Note that LASNET is holding a big fat conference/solidarity gathering on October 15, 16, 17 @ Trades Hall, with lots of great speakers from Latin America, Australia and the region, along with workshops on a divers range of subjects, ‘Building Bridges and Global Resistance against Multinational Corporations’.

I live in Melbourne, Australia. I like anarchy. I don't like nazis. I enjoy eating pizza and drinking beer. I barrack for the greatest football team on Earth: Collingwood Magpies. The 2020 premiership's a cakewalk for the good old Collingwood.
View all posts by @ndy →
This entry was posted in Anti-fascism, History, State / Politics, That's Capitalism!, War on Terror and tagged Mapuche. Bookmark the permalink.