The ONLY Spies I trust! 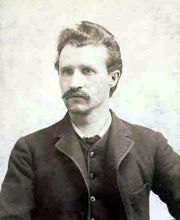 The 1st of May 1886 was targeted for a general strike in favor of an eight hour day. 350,000 workers struck, 40,000 in Chicago. On May 3, 1400 strikers were locked out of the McCormack Harvester factory. 300 scabs, guarded by 400 police, were put to work. Circulars were distributed calling for a demonstration in Haymarket Square. August Spies, Albert Parsons, and Samuel Fielden addressed a crowd of 3,000. As he was closing, 180 police appeared. (The mayor had already left and dismissed the police). The police opened fire and killed several. A bomb was thrown toward the police, killing six. The incident led to mass arrests and the first “Red Scare.” Eventually eight of the best organizers in Chicago were tried and condemned. None but Fielden was at the meeting when the bomb was thrown. Parsons, Spies, Engel and Fischer were hanged. Governor Altgeld of Illinois pardoned the others. Prior to being sentenced to hang for his role in the alleged Haymarket Conspiracy, August Spies gave the following statement…

…But, if you think that by hanging us, you can stamp out the labor movement — the movement from which the downtrodden millions, the millions who toil and live in want and misery — the wage slaves… if this is your opinion, then hang us! Here you will tread upon a spark, but there, and there, and behind you and in front of you, and everywhere, flames will blaze up. It is a subterranean fire. You cannot put it out.

THE GROUND IS ON FIRE

upon which you stand. You can’t understand it. You don’t believe in magical arts, as your grandfathers did, who burned witches at the stake, but you do believe in conspiracies; you believe that all these occurrences of late are the work of conspirators! You resemble the child that is looking for his picture behind the mirror. What you see, and what you try to grasp is nothing but the deceptive reflex of the stings of your bad conscience. You want to “stamp out the conspirators” — the “agitators?” Ah, stamp out every factory lord who has grown wealthy upon the unpaid labor of his employees. Stamp out every landlord who has amassed fortunes from the rent of overburdened workingmen and farmers. Stamp out every machine that is revolutionizing industry and agriculture, that intensifies the production, ruins the producer, that increases the national wealth, while the creator of all these things stands amidst them, tantalized with hunger! Stamp out the railroads, the telegraph, the telephone, steam and yourselves — for

EVERYTHING BREATHES THE REVOLUTIONARY SPIRIT.

I think there’s a lesson in that for all of us, don’t you?

I live in Melbourne, Australia. I like anarchy. I don't like nazis. I enjoy eating pizza and drinking beer. I barrack for the greatest football team on Earth: Collingwood Magpies. The 2020 premiership's a cakewalk for the good old Collingwood.
View all posts by @ndy →
This entry was posted in Anarchism, History, State / Politics. Bookmark the permalink.