Oh yeah. In Russia: Vasily Krivets, 22, was convicted of 15 counts of murder motivated by ethnic hatred and sentenced to life in prison while his nutzi accomplice, Dmitry Ufimtsev, 23, who unlike Krivets pleaded guilty, got 22 years in prison on five counts of murder. The pair were members of the (banned) neo-Nazi groupuscule ‘National Socialist Society’. In the US: Daniel Cowart, one of two nutzis to hatch a bizarre plot to kill President O’Bama back in October 2008, got sentenced to 14 years jail last week. “Cowart’s sentencing was delayed so he could remove tattoos of a swastika and iron cross before reporting to prison.” (The other guy got 10 years.)

The British National Party (BNP) appears to be imploding, as Nick Gri££in continues to alienate senior figures within the Party, and the rats leave the sinking ship. Given that most BNP members are a little bit stoopid, however, and in the absence of a credible alternative, it seems likely that the author of Who Are the Mindbenders? will continue to milk a living out of gullible British racists for a while longer. 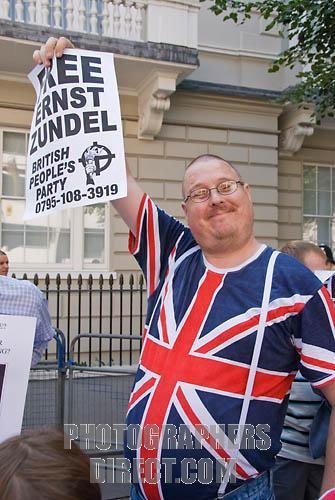 In the US [h/t : j/r], Melissa Hack is next on the white power chopping block according to OPP. In July, Hack was charged with one count of making a false statement in connection to her involvement in the murder of two SHARPs / ARA activists Daniel Shersty and Lin “Spit” Newborn by boneheads in Las Vegas in 1998. Hack’s brother Ross — whose rich daddy sent him on a two-year vacation to Europe following the murders — is a member of the Hammerskins.

A federal judge in Los Angeles last year sentenced Ross Hack to three years in prison for lying on a passport application while under investigation in the double murder case. He came under scrutiny in January 2008, after he was identified as an organizer of a white supremacist rally in Las Vegas where an individual was assaulted and nearly killed.

In Australia, the (Southern Cross) Hammerskins are having another party on the Gold Coast on December 11. (Their last part-ay, held just a few days prior to Adolf Hitler’s birthday, attracted a relatively large amount of media attention.) Performing at the White Christmas (fnarr fnarr) celebration will be local boys Open Season and Full of H8. As ever, the gig is being co-sponsored by the local branch of Blood & Honour (to be confused with Blood & Honour/Combat 18). There’s bad blood brewing between B&H/SCHS and their rivals in Volksfront, as detailed in National Anarchist! blog:

According to an anonymous source, there’s been a recent re-alignment along the fringes of the fascist right in Australia. The re-positioning is both the result of and the Creator of some ongoing friction between ‘Blood & Honour Australia’ (B&H), the ‘Southern Cross Hammerskins’ and the ‘Creativity Alliance’ (CA) on the one hand and the ‘national anarchists’, ‘New Right’ (NR) and ‘Volksfront Australia’ (VF) on the other…

The period of most intense and violent rivalry between and among neo-Nazi gangs in Australia was in the late ’80s and early ’90s.

In 1989 in Gosnells (WA) Wayne Robert Napier and William Patrick Monaghan murdered David Locke, falsely believing him to be a police informant. The trio were members of ‘Java’ Jack van Tongeren’s neo-Nazi groupuscule the ‘Australian Nationalists Movement’ (ANM). At the time of the murder, the ANM were engaged in a terrorist campaign against ethnic minorities and left-wing political opponents. The organisation later formed part of the now disbanded ‘White Pride Coalition Australia’ (along with at least one current member of Dr James Saleam’s ‘Australia First Party’).

In 1991 in Perth (WA), Scots-born Colin Irvine, a ‘dangerous and armed criminal with a history of involvement with skinhead and neo-Nazi groups’ was on the run after the horrific murder of a neo-Nazi associate. He was killed by police. On Hitler’s birthday (April 20) in that same year, ‘National Action’ member Perry John Whitehouse murdered fellow bonehead Wayne “Bovver” Smith at Saleam’s bunker in Tempe. On Hitler’s birthday in 1990, Dane Sweetman murdered David “Pommy Dave” Noble. Whitehouse, Smith and Sweetman all had involvement in neo-Nazi gang activity.

So much for History.

Back in Dead Europe…

Ukraine : The rise of the radical right in Ukraine, Andreas Umland, Kyiv Post, October 21, 2010 | Czech Republic : Czechs jailed for Roma hate attack, Al Jazeera, October 20, 2010 (“Czech court punishes four men for brutal April 2009 firebomb attack on a Roma family’s home”) | In Milan, Italy, the Italian Hammerskin franchise has reportedly had to cancel a gig to celebrate the legacy of good fascist Leon Degrelle | Two decades of neo-Nazi and racist violence in Central Europe, October 21, 2010 (“A summary of the basic information available regarding neo-Nazi and racist attacks on Roma committed in the Czech Republic and Central Europe”).

Finally, please support Jock Palfreeman, the young Australian serving a 20 year sentence for murder in Bulgaria. After an initial hearing on October 21, Jock’s appeal against his sentence has been re-scheduled for November 11. Jock’s chief crime was to come to the defence of two Roma under attack by a large gang of racist football hooligans, only to then find himself also under assault. Rallies in support of Jock have been held in Vienna, Austria, Sydney, Australia, Paris, France, Moscow, Russia and elsewhere.

For a recent summary of Jock’s case, please see:

Who Makes the Nazis? is a site focused on the fascist presence in various ‘transgressive’ (by their own estimation) musical subcultures. The claim is that at the fringes of these milieus, ideas about the sanctity of art and the irresponsibility and fundamental ‘amorality’ of the artist provide perfect cover behind which fascist and pro-fascist ideologues are allowed to spread their ideas. Currently these cultures include ‘post-industrial’, ‘martial’, ‘neo-folk’, ‘apocalyptic folk’ and ‘darkwave’, among others. It is not a matter of condemning these subcultures, which in fact contain many non-fascist, liberal, socialist, anti-fascist, etc., supporters, but rather of drawing a clear line between the fascists and non-fascists within them by showing the latter the nature and extent of the problem, in the hope that they will themselves marginalise and ultimately reject fascist participation in their ‘scene’…

I live in Melbourne, Australia. I like anarchy. I don't like nazis. I enjoy eating pizza and drinking beer. I barrack for the greatest football team on Earth: Collingwood Magpies. The 2021 premiership's a cakewalk for the good old Collingwood.
View all posts by @ndy →
This entry was posted in Anti-fascism, Death, History, Music, State / Politics, War on Terror and tagged antifa notes. Bookmark the permalink.