What’s up with that?

Inspired by a similar gathering in Sydney in April this year, the melbourne feminist collective is organising a conference to take place next year @ North Melbourne Town Hall over the weekend of May 28/29.

On Wednesday, December 15 @ Bella Union Bar @ Trades Hall, Cordelia Fine will be talking about her book Delusions of Gender: The Real Science behind Sex Differences. This will be “A fascinating event for science buffs and anyone interested in combating sexism”, apparently. You can also watch Cordelia @ Slow TV. 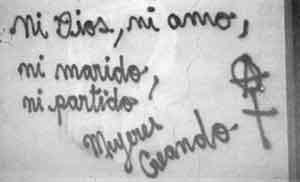 See also : The Dawn Chorus – by Australian feminists, for Australian feminists: Fresh, feminist commentary on pretty much anything and everything | History and Actuality of Anarcha-feminism: lessons from Spain (Marta Iniguez de Heredia, Lilith, No.16, 2007).

I live in Melbourne, Australia. I like anarchy. I don't like nazis. I enjoy eating pizza and drinking beer. I barrack for the greatest football team on Earth: Collingwood Magpies. The 2023 premiership's a cakewalk for the good old Collingwood.
View all posts by @ndy →
This entry was posted in Sex & Sexuality, State / Politics and tagged Feminist Futures, melbourne feminist collective. Bookmark the permalink.