Police have been kicking arse and employers have been kicking goals @ the Visy factory in Dandenong and @ the Swift Australia factory in Brooklyn. Between 29 and 34 picketers were arrested @ Visy, while 120 workers have been locked out @ Swift. (“The 20 hectare Brooklyn plant situated in Melbourne’s west is the largest multi-species processing facility in the southern hemisphere.”) According to one report, “Last Friday [December 9], Visy management secured a Victorian Supreme Court injunction banning union organisers and delegates from the Dandenong picket” (Australia: Striking Visy workers arrested on picket line, Richard Phillips and Tania Baptist, wsws.org, December 13, 2010).

Helicopters, on the other hand, are very cool, and Visy management has been using them to fly scabs in over the heads of picketers.

A community picket has been called for Tuesday, December 13 from 6am. The picket is located near the corner of Greens Rd and Hammond Rd in Dandenong.

The picketers welcome solidarity from fellow workers, especially those with helicopters, or even vocal training:

Word on the street is that, as well as refusing to grant minor wage increases, combative Visy management is attempting to accelerate casualisation (with a concomitant reduction in wages and conditions) with a view to de-unionising the site.

As for Swift Australia, it’s a subsidiary of the Brazilian-based TNC JBS Friboi, the largest beef producer in the world. Swift has been busy taking advantage of the 457 visa scheme elsewhere in the country, and raking in even fatter profits as a result. The lockout was triggered by workers’ refusal to to agree to a measly 2% pay increase “in exchange for working Saturdays with reduced penalties” (Brooklyn meatworkers in wage war, Maribyrnong Weekly, December 8, 2010).

Presumably, police will eventually be kicking arse in Brooklyn too, altho’ if the company had enough smarts, it would have ensured it had sufficient stockpiles to starve the recalcitrant workers into submission, and thus avoid the need for any nastiness.

Still, every cloud has a silver lining, and while workers fight for scraps, others–in particular their employers–are a little more fortunate…

* The average total remuneration of a chief executive of a top 50 company listed on the Australian Securities Exchange in 2010 is $6.4 million. The average CEO’s total pay packet is now worth almost 100 times that of the average worker.
* Executive pay rose by an average of over $940,000 over the past year – the equivalent of an extra $18,000 a week, while the annual wage for a full-time worker rose by just $3200, or $62 a week.
* Since 2001, the base pay for executives has risen by 130%, while average weekly earnings have risen by 52%. Inflation over the same period has been 28.6%.
* Across the economy, profits soared by 27.5% in 2009-10 financial year. Gross operating profits in mining have risen by 60.6%, while wages grew by just 3.8%. Construction profits rose by 55.5%, but wages by just 2.9%. And profits in the information, media and telecommunications sector grew by 10% – five times wages.
* Company profits as a share of national income are now back to the record levels of 2008, while the wages share is the lowest since 1964. 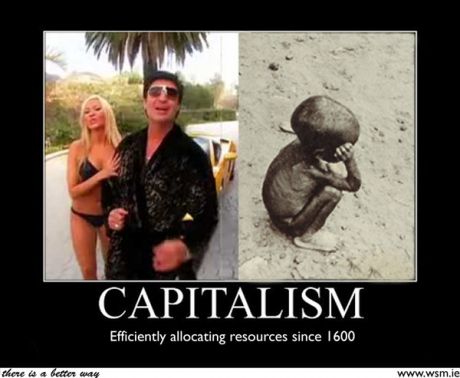 I live in Melbourne, Australia. I like anarchy. I don't like nazis. I enjoy eating pizza and drinking beer. I barrack for the greatest football team on Earth: Collingwood Magpies. The 2021 premiership's a cakewalk for the good old Collingwood.
View all posts by @ndy →
This entry was posted in That's Capitalism! and tagged Swift Brooklyn, Visy Dandenong. Bookmark the permalink.