I’ll be blogging less frequently during the course of the next few weeks. In the meantime, some blogs what are worthy of note:

marrichiweu: a new local (Melbourne) blog about muzak and politricks.

Flying Machine is (another local, Sydney blog) all about zines and stuff.

Wearing a virtual cowboy hat and having shot the sheriff, Phil Dickens has completed another in his ongoing series of Anarcho-blogging roundups.

THE SADNESS OF POST-WORKERISM or “ART AND IMMATERIAL LABOUR” CONFERENCE A SORT OF REVIEW (Tate Britain, Saturday 19 January, 2008) by David Graeber (PDF) comes to me via Patrick St. John via (Notes On) Politics, Theory & Photography. On a related note, here’s an img of a dead woman who killed—and possibly ate–babies:

Another interesting blog from Los Estados Unidos is The Crow’s Eye ((…and the sly dog’s mistrust…)).

The Roar Of The Masses Could Be Farts And If My Aunty Had Balls She’d Be My Uncle.

Bloody Underrated is also all about the music, man.

Speaking of which, Who Makes the Nazis? has drawn my attention to Allerseelen on Tour: Austrian Far-Right Musical Project on West Coast Tour, Playing Support to Northwest Heavy Metal Act, a post on the Rose City (Portland, Oregon) Antifa blog. In Melbourne, an attraction to neo-Nazism on the part of local performer Jack/Gareth Sansom–and his promotion of it via White Noise Productions and War Doctrine (NSBM) distro–at least has the virtue of being undisguised. 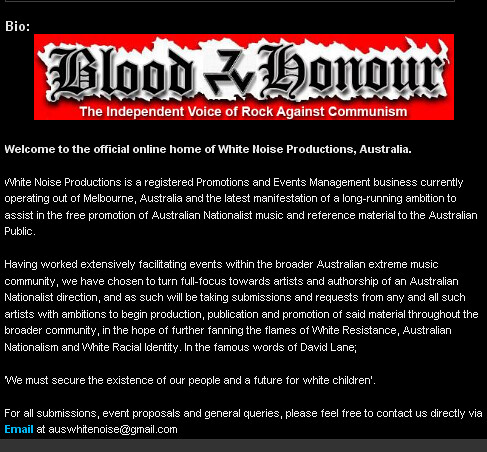 Speaking of Jews (Sansom, the funny bugger, promotes the song ‘Six Million More’ by the Bully Boys on his MySpace page), Tablet Magazine has an i/view w/- Uncle Noam here; Noel Ignatiev on being an Ex-Jew is also interesting.

Finally, Black Flag Magazine has a blog, while anarchyandsociety is ‘synthesizing the rich traditions of anarchism and sociology’.

I live in Melbourne, Australia. I like anarchy. I don't like nazis. I enjoy eating pizza and drinking beer. I barrack for the greatest football team on Earth: Collingwood Magpies. The 2021 premiership's a cakewalk for the good old Collingwood.
View all posts by @ndy →
This entry was posted in !nataS, Anarchism, Anti-fascism, Art, Broken Windows, History, Media, Music, State / Politics, That's Capitalism!, War on Terror and tagged Bloggy. Bookmark the permalink.