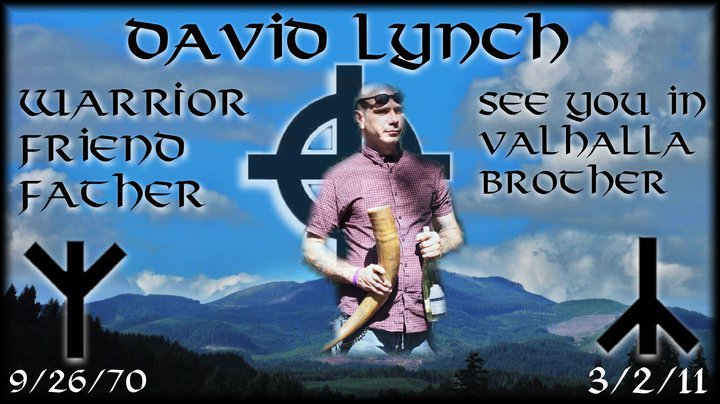 As previously noted, one of the founders of the bonehead (neo-Nazi skinhead) gang ‘American Front’, David Lynch, is dead, shot to death in his home in Sacramento, CA. Like other dead boneheads, his death has been greeted with much wailing and gnashing of teeth by his kameraden on the racist right–their attempts to balance the more generalised expressions of hatred and contempt for Dead Guy on various news sites and bulletin boards an admirable, if impossible, quest.

On learning of Lynch’s death, my first thought was ‘I wonder which of his fellow boneheads is responsible?’ Today, that person of interest is revealed as being Charles Gilbert Demar III, lead shouter of nutzi band ‘Stormtroop 16’. A sample lyric from the album The new voice of oi! (Condemned Records, 2006):

Sacramento is our home / We drenched these streets with blood and bone / Stick together, through thick and thin / We’re born to fight, we’re bred to win / Street commandos in the night / We love the chase, we love to fight / Can’t back down, this is our fate / Face the aggression / Hate! Hate! Hate! Hate! 88!

Demar’s former mother-in-law, Kelly Caramella, told The Bee today that police had detained her for questioning Wednesday afternoon and wanted information about Demar. “It is totally ludicrous,” she said. “It is impossible that Charlie would hurt Dave, they loved each other as brothers.”

Point being, when they’re not bashing homeless people or picking on inter-racial couples, boneheads have a habit of channeling their violence towards one another. Curiously, David Lynch was recently pictured on the Rose City Antifa blog along with Randal Krager, the founder of another bonehead gang called Volksfront (President of Neo-Nazi Organization Contracted to Work in the Middle East, January 11, 2011):

Rose City Antifascists (RCA) discovered a particularly noteworthy email in the wealth of intelligence made public by the hack. In a message dated October 15, 2009, Randal Krager—founder and president of the neo-Nazi organization Volksfront International—delegated tasks involved with running the group while he prepared to spend a year in the Middle East working for a private firm, possibly connected to the US military presence in the region…

The Australian franchise of Volksfront is largely based in Sydney. Its two principal spokesmen (No Girls Allowed!) are 20-something Chris Smith and 40-something Welf Herfurth. Smith–who in December 2010 got a 12-month suspended sentence for bashing and robbing some guy–is also a Creatard (a ‘Reverend’ in the the White supremacist Creativity kvlt) and the bRanes behind a new blog titled “AntiAntifaAustralia”, which specifically targets people who oppose fascism. Herfurth, for his part, is responsible for both the New Right and ‘national anarchism’ and serves as MC at the annual Australia First Party conference known as the Sydney Forum. Last year the Forum’s honoured guest was Canadian Holocaust denialist Paul Fromm.

What a sad and sorry bunch.

I live in Melbourne, Australia. I like anarchy. I don't like nazis. I enjoy eating pizza and drinking beer. I barrack for the greatest football team on Earth: Collingwood Magpies. The 2021 premiership's a cakewalk for the good old Collingwood.
View all posts by @ndy →
This entry was posted in Anti-fascism, Death, Music and tagged American Front, Charles Gilbert Demar III, Chris Smith, David Lynch, Randal Krager, Stormtroop 16, Volksfront, Welf Herfurth. Bookmark the permalink.