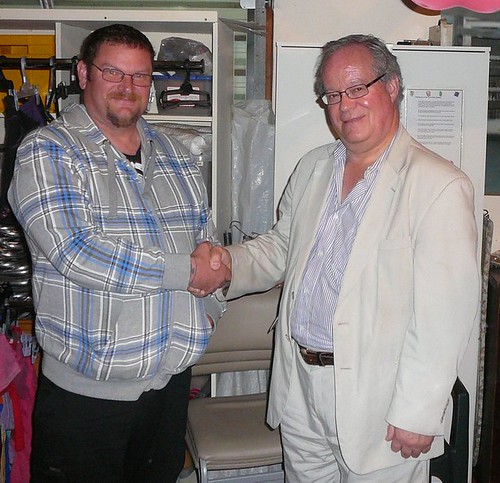 Right Wing Resistance New Zealand (RWRNZ) is veteran Kiwi fascist Kyle Chapman‘s latest organising project. The group — which seemingly consists of several dozen neo-Nazi skinheads, mostly from Christchurch — has been in existence since early 2009, and has recently become more active, distributing propaganda — see : Right Wing Resistance New Zealand : They took our jobs! (January 12, 2011) — and apparently organising several street patrols. The gang’s politics are fairly run-of-the-mill (see New Zealand National Front) but the boys’ resemblance to an OMC may cause them some problems in the future as their (arguably) more serious rivals resent the gang’s intrusions onto their turf. Responding to the accusation that RWRNZ is at war with the Rebels MC, Kyle Chapman rites in there blug thet “We have a Clare purpose. [I]t is to fight communism and other scum that want to take away our freedoms.”

Which begs the question: Who is Clare?

Now Webster is waging his own war on intolerance, but his battlefield is online.

Conveniently, Webster says, the group’s blogspot advertising this campaign, included cellphone numbers and email addresses, which prompted him to fight back with a Facebook campaign, Spam A Nazi, launched this weekend.

Webster advocates spamming the group with texts and YouTube links to the Chinese National Anthem and songs such as I think I’m Turning Japanese, and People Are People.

“My flatmates and I found this racist pamphlet in our letterbox and we came up with the idea of sending them a message back,” Webster said.

“Now we have 140 members on Spam A Nazi. I think the Right Wing Resistance campaign is more to intimidate than recruit.

“My grandfather died from war-related injuries when my dad was eight. It’s sad to think that this intolerance still exists two generations on.

“After all we’ve been through in Christchurch, I wanted to send a clear message that this hatred won’t be tolerated. I’m not sure of the legalities around spamming but I’m sure few will have any sympathy for them.”

“I didn’t understand what they said, they’re just wasting their time. I just delete them. It’s like squashing an annoying bug to me, I don’t even think about it.”

I live in Melbourne, Australia. I like anarchy. I don't like nazis. I enjoy eating pizza and drinking beer. I barrack for the greatest football team on Earth: Collingwood Magpies. The 2023 premiership's a cakewalk for the good old Collingwood.
View all posts by @ndy →
This entry was posted in Anti-fascism, Media and tagged Kyle Chapman, Right Wing Resistance New Zealand, RWRNZ, Spam A Nazi. Bookmark the permalink.