Several year ago I was informed by a number of experts on the (now sadly defunct) ‘Melbourne Punx Forum’ that despite my wild claims to the contrary, there were in fact no neo-Nazis in Russia. Therefore, any efforts to possibly assist those punks and skinheads being murdered by these non-existent neo-Nazis was a waste of time and energy; time and energy better spent on having fun and following fashion. And yet…

June 2011: “At least six people became victims of racist and neo-Nazi attacks in June 2011, with three of those dying due to their injuries. These figures bring the year-to-date totals to 14 deaths, 58 people injured, and an additional 5 people receiving death threats across 15 regions of Russia.”

MOSCOW (AP) — A Russian court on Monday handed down sentences ranging from 10 years to life in prison to 12 members of the country’s most vicious neo-Nazi gang convicted of 27 hate killings, which included a videotaped decapitation of one of their own gang members and other crimes.

The Moscow City Court sentenced five members of the group, the National Socialist Society North, to life, giving another seven members between 10 and 23 years. One was handed an eight-year suspended sentence.

The defendants were mostly men in their 20s and one woman. Most of the gang members had pleaded partial guilt but requested leniency after their lawyers say they were coerced into committing the crimes.

“Irrespective of whether they were fooled or mentally lost, they are evil killers who will never get back to a normal life,” said Alexander Kolodkin, an ethnic Russian whose son, also named Alexander, was stabbed to death in February 2008. “They should be isolated.”

Sergei Stashevsky, a lawyer for Vasilisa Kovolyova, who was sentenced to 19 years, claimed that his client’s confession was “beaten out” of her “through torture.”

“The trial is definitely political,” he said.

Maria Malakhovskaya, lawyer for Konstantin Nikiforenko, who received a 20-year sentence, blamed the websites of neo-Nazis and Russian supremacists for brainwashing the defendants with far-right ideology.

During the 18-month trial, the court heard that the gang hunted mostly darker-skinned labor migrants from Russia’s Caucasus region, ex-Soviet Central Asia, as well as Africans and South East Asians in a chilling series of rampages that climaxed in February and March of 2008.

The youths ganged up on apparent foreigners and stabbed them with knives, metal rods and sharpened screwdrivers, the court heard, in brutal attacks coordinated by the gang’s scrawny leader, Lev Molotkov. He gave fellow assailants a few rubles for the train and cigarettes. According to court papers, Molotkov, who’s in his mid-twenties, testified that that during a New Year’s toast on Dec. 31, 2007, he proclaimed 2008 to be “the year of white terror” in Russia.

Molotkov’s gang is estimated to have hundreds of supporters nationwide.

They were also convicted of strangling and decapitating one of their comrades whom they suspected of being a police informant and stealing $112,000 from the gang’s funds. The decapitation, during which they donned clown masks and sang a patriotic song, was videotaped and posted online.

During the trial, the defendants mocked the judge, shouting curse words and performing the Nazi salute. They cracked jokes and demonstratively ignored the judge when he spoke to them. Some wore white masks. After the sentences were handed down, one could be heard to yell “our conscience is higher than your laws.”

The group’s leader and ideologue Maxim Bazylyev, nicknamed Adolf [below], committed suicide by slitting his wrists and neck in April 2009. Shortly after his suicide another of the group’s activist shot himself. 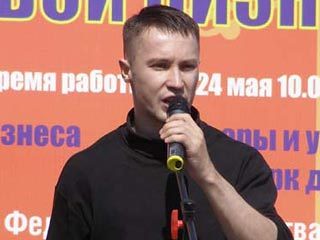 Their friends and supporters claimed both were killed by police.

The LDPR party and a group of nationalist politicians and activists said their union would “protect the Russian people and (Russia’s) interests.”

LDPR stands for the Liberal Democrat Party, but the party has a strong nationalist manifesto and rejects liberal policy. The coalition gives the party access to more a hardline nationalist electorate, which is growing as Russia grapples with heightened tensions among ethnic communities. Parliamentary elections are set for December. The LDPR is represented in the parliament that is dominated by Prime Minister Vladimir Putin’s United Russia party. Critics say all four parliamentary parties tow the official line, though to varying degrees.

Since its inception in 2004, the National Socialist Society was part of a broader network of neo-Nazi organizations that advocated for an ultranationalist government that would grant exclusive rights to ethnic Russians. In 2007 the group split in two, and the extremist North faction appeared. [The Russian Supreme Court banned the Society in February 2010. See also : Misuse of anti-extremism legislation @ SOVA.]

Ethnic Russians comprise two thirds of the country’s population of 142 million, while more than 100 ethnicities account for the remaining third.

The group recruited new members online and through a network of sports clubs that were labeled centers of patriotic education.

During the trial, one of the defendants said he killed three people in 24 hours, according to court papers.

In recent years, dozens of mostly underage neo-Nazis have been convicted across Russia.

Plummeting birth rates among ethnic Russians, economic woes and an unprecedented influx of labor migrants from the Caucasus and Central Asia triggered widespread xenophobia and a spike in hate crimes. Some Russians and nationalist politicians accuse the migrants of stealing jobs and forming ethnic gangs.

Since then, the number of hate crimes have gone down, but human rights groups say neo-Nazis are increasingly resorting to bombings and arson against police and government officials, whom they accuse of condoning the influx of illegal migrants. Ultranationalist groups have also stepped up attacks on human rights activists and anti-racist youth groups.

In early May, a member of an ultranationalist group [Nikita Tikhonov] got a life sentence for the Jan. 2009 killing of a human rights advocate [Stanislav Markelov] and a journalist [Anastasia Baburova], his girlfriend and accomplice [Yevgeniya Khasis] was sentenced to 18 years in jail.

In April 2010, a federal judge who presided over trials of White Wolves, a mostly teenage group of boneheads convicted of killing and assaulting non-Slavs, was gunned down contract-style outside his Moscow apartment.

See also : The Other Russia | avtonom.org.

I live in Melbourne, Australia. I like anarchy. I don't like nazis. I enjoy eating pizza and drinking beer. I barrack for the greatest football team on Earth: Collingwood Magpies. The 2021 premiership's a cakewalk for the good old Collingwood.
View all posts by @ndy →
This entry was posted in Anti-fascism, Death, State / Politics, War on Terror and tagged Russia. Bookmark the permalink.