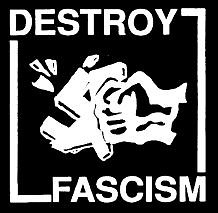 A far-right website which publishes leftwingers’ addresses has come under fire in the Commons in the wake of a knife attack on a union activist.

The victim, Alec McFadden, has apparently been targeted by the far right because of his outspoken opposition to the fascist BNP. Labour MP Angela Eagle, who has called on fellow MPs to “take action” of some sort, believes that Redwatch UK may be registered to the neo-Nazi terrorist gang Combat 18, a project of the international terror network Blood And Honour. UK Antifa describe the two groups as follows:

Rarely sighted these days in England, C18 now has sister groups in several European countries and the USA. Damaged by the revelation that his number two, Darren Wells, was an informer for Searchlight and the security services, C18 Fuhrer Wilf Browning has had an exceptionally low profile recently. Recent raids on C18 in Poland and northern Germany indicate that the authorities still regard C18 as a threat, even if no one else does.

The cash cow of the international far-right. Rather like football hooliganism, Blood & Honour originated in England, but has gone on to bigger and better things elsewhere. An important player in the development of far-right ideas internationally, Blood & Honour has struggled to retain much of a profile in its homeland. In Europe an outright ban by the German government was an indication of its size and threat. Here [the UK] B&H struggle to hold more than the odd gig in the sticks. Perhaps people in Britain have realised that the music is shit?

Well, their music is certainly shit, but so too is the fate of former Fuhrer Charlie Sargent:

Paul David Sargent, known as Charlie Sargent, is the former leader and founder of Combat 18, a British neo-Nazi group. He was initially a supporter of the [BNP] but split from them in 1996.

Sargent spent time in prison in 1997 for distributing anti-Semitic literature, and was sentenced to life imprisonment on January 21, 1998 at Chelmsford crown court for his part in the murder in 1997 of Chris Castle, another member of C18. It has since been claimed that Sargent was a paid informant for the British government.

When the 5 foot tall Sargent was jailed for life, The Sun ran the front page headline ‘The End of the Road For The 5 Foot Toad’.

A further aside: neo-Nazis are quite good at murdering one another. Very good, in fact. In 1989, ANM member Wayne Robert Napier used a concrete pole to beat David Locke to death. Further:

On 20 April 1991 — Adolf’s bithday… — National Action member Perry Whitehouse gunned down fellow member Wayne ‘Bovver’ Smith at the National Action headquarters. What Whitehouse didn’t know, as he closed the hand of his bullet-riddled former comrade around a knife to make it look like self-defence, was that ASIO had bugged the place, and the whole sorry affair was down on tape.

Smith : What’s it say?
Whitehouse: Ask him, mate. Just ask him. He’s…
Smith : You’re the one that’s fuckin’ sayin’ this.
Whitehouse : Just wait here. Footsteps. I’ll show what I got to say.
Smith : All right.
Music. Pause in conversation. Six sharp noises in succession. Distinct sound similar to a gun being fired. Crashing sounds. Music.
Whitehouse : That’s what I got to fuckin’ say, you fuckin’ cunt.
Another member, Gregory Jorgensen, then speaks. His words are inaudible.
Whitehouse : I just killed the prick. You wanna know. Yeah, you wanna fuckin’ know. What’ya wanna know… to kill you too… I just shot the fuckin’ prick. Right. I just shot the cunt. Wanna know.
Music stops.
Whitehouse : Because he’s a fuckin’ arsehole, that’s why I shot him. Right. Do you think I’m fuckin’ scared of fuckin’ goin’ to jail. I don’t give a fuck. I’m not scared. Right. I shot the cunt dead. That’s what it’s all about boy, that’s what it’s all about, right. You ain’t got the guts to fuckin’ face up to that, you’re fuckin’ weak as piss. Right, he’s fuckin’ dead. Now we gotta get rid of that body or I’m gonna get rid of the fuckin’ body, right.
A gasp is heard.
Whitehouse : Shut up, ya fuckin’ prick.

In Australia, Blood and Honour is most ably represented by Peter Campbell (WPCA) and Welf Herfurth (Australia First); the group’s last gig taking place at Newcastle’s Hamilton Hotel on Saturday the 25th of February. Blood and Honour is a “banned” organisation in Germany, which may help explain why Herfurth — former President of the Riverstone (NSW) branch of the One Nation Party and former executive member of the (German) National Democratic Party — is now living and working in Australia rather than his country of birth.

Of course, as previously revealed by Fightdemback, Welf wasn’t the only neo-Nazi wanker deemed worthy of acknowledgement by the rather dim-witted Blood and Honour NSW. Here’s a message one of the organisers sent to supporters following the gig:

[T]hanks to everyone who made the effort to support us and their local scene on the [S]aturday night just pas[t] (25th [F]eb[ruary]). Those who have complained about the lack of a local scene and put their money where their mouth is [sic] and made the effort to turn up – you people are the reason we want to put these shows on. [T]o quote [I]an [S]tuart – “Stop sign? What Stop sign?”

The funds raised from this show will go back into the local scene in the form of future events and equipment purchase to reduce the operating costs of BHNSW and therefore increase [our] ability to throw bigger and better events.

[S]pecial thanks goes out to Welf, Mark, Christian, James, [S]teve and [J]eff who all [pitched] in and helped out in a massive way and without [whose] help there would be no gig to attend. [A]ctions speak louder than words.

BHNSW and Blood Red Eagle both thank everyone who attend[ed] for their support and we hope to see you all back at the next event.

Ooops. Anyway, back to Redwatch. First, the UK. Then, Poland.

Two years ago the Home Office promised action against Redwatch “very soon” after a series of representations from MPs.

A Home Office spokeswoman told the BBC News website at the time: “We are aware of the anxiety caused by the presence of such material on the internet.

“We have had representations from many MPs about this matter and will be responding to their concerns very soon.”

Speaking on Wednesday, a spokeswoman said the Home Office was working with the Association of Chief Police Officers to try to tackle the sort of incitement on the Redwatch website.

“We believe the existing legislative framework is enough for tackling this,” she added.

In the Commons, Mr Coaker said there were problems clamping down on overseas websites.

“In these circumstances, we would not have the power to close down that website, or in some cases to prosecute the people who are responsible for it, if illegal material was not distributed in or uploaded from the UK,” he said.

“The offence of inciting others to commit crimes would not be exempt from prosecution under these circumstances, however, regardless of whether the perpetrator had used a website hosted in a foreign jurisdiction.”

Meanwhile, DreamHost is telling the world to kiss its lily-white arse. Members of the RevolutionaryLeft forum, however, don’t seem all that keen on complying…

See also : Ex-Combat 18 man speaks out [BBC, November 11, 2001]; Combat 18’s hardline racism [BBC, April 19, 1999]; and the always irreverant Anti-fascist News [London Class War], from which the following report is taken : “Ireland AFA action (7th June 2006) : Anti Fascist Action and members of Anarchist Youth routed a planned meeting of Nazi bonehead gang, the Celtic Wolves in Dublin city centre yesterday. What was planned as the first meeting in Dublin this year for these sad tossers ended in utter humiliation as anti-fascists first evicted them from their meeting point in a city centre pub and then proceeded to beat them up and down O’Connell Street.”

I live in Melbourne, Australia. I like anarchy. I don't like nazis. I enjoy eating pizza and drinking beer. I barrack for the greatest football team on Earth: Collingwood Magpies. The 2023 premiership's a cakewalk for the good old Collingwood.
View all posts by @ndy →
This entry was posted in Anti-fascism, History, Media, State / Politics, War on Terror. Bookmark the permalink.