From the Department of Muslamic Rayguns:

Now that I’ve got your attention… 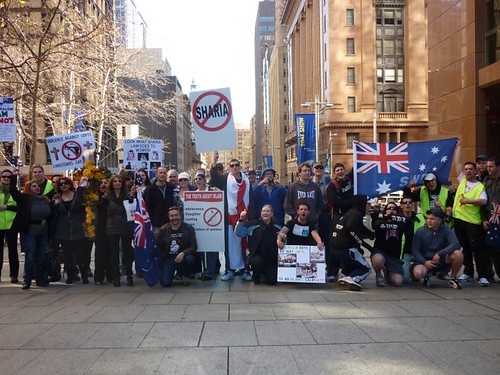 5,000 500 maybe 50 or so quasi-hysterical bigots gathered in Sydney on Saturday to wail about the Muhammadization of Australia. The rally was co-sponsored by the ‘Australian Defence League’ and the ‘Australian Protectionist Party’. The leader of the ADL, Martin Brennan, is a whinging Pom currently being held in Maribyrnong Detention Centre for over-staying his visa. The APP, on the other hand, has a habit of standing outside Detention Centres taunting detainees.

The ADL’s first and only previous rally* was held in Melbourne in May. On that occasion, perhaps 20 or 30 anti-Muslim malcontents, after having stood around for an hour or so to no discernible effect, were chased away from Federation Square by an elite squad recruited from the New Communist/Truth/Jihad Alliance.

While Norwegian loon Anders Breivik may be a fan of the ADL’s parent organisation the English Defence League, its bastard offspring is obviously struggling hard to obtain much support Down Under.

I live in Melbourne, Australia. I like anarchy. I don't like nazis. I enjoy eating pizza and drinking beer. I barrack for the greatest football team on Earth: Collingwood Magpies. The 2021 premiership's a cakewalk for the good old Collingwood.
View all posts by @ndy →
This entry was posted in Anti-fascism and tagged Australian Defence League, Australian Protectionist Party, Martin Brennan. Bookmark the permalink.