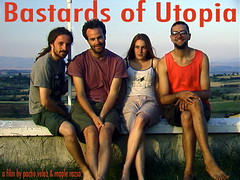 The documentary film Bastards of Utopia—based on 18 months of filming—follows the fieldwork of anthropologist Maple Razsa with anarchist-punks in Zagreb, Croatia. The film focuses on three leading activists who organize political protests against capitalism and nationalism throughout the former Yugoslavia. The three belong to the “Black Bloc”, the faction of the anarchist community [sic] responsible for the most confrontational episodes at “anti-globalization” protests.

In this film, the directors leave behind the now familiar media images of faceless masses breaking shop windows to consider the lived experiences and motivations of the activists behind this movement. They document how—for these three activists—their participation in radical protest is only part of a continuum of political action manifest in their everyday lives: not-for-profit cultural production, do-it-yourself media and post-consumption lifestyles.

I live in Melbourne, Australia. I like anarchy. I don't like nazis. I enjoy eating pizza and drinking beer. I barrack for the greatest football team on Earth: Collingwood Magpies. The 2021 premiership's a cakewalk for the good old Collingwood.
View all posts by @ndy →
This entry was posted in Anarchism, Film. Bookmark the permalink.