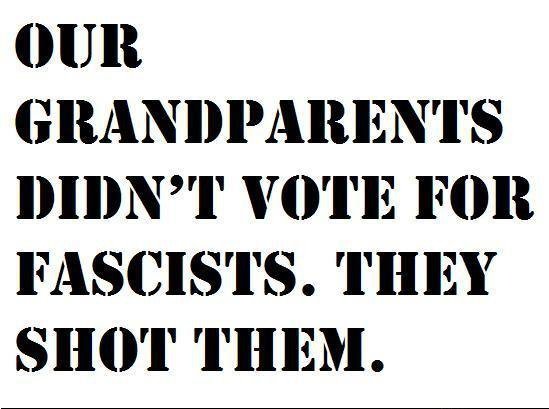 Last week, ASIO tabled its Annual Report in Parliament. Inter alia, it included some remarks on “racist and nationalist extremists in Australia” and took note of the recent “emergence of an ‘anti-fascist’ movement, led by self-styled anarchists, which aims to confront those it identifies as fascists, including some of the nationalist and racist extremist groups also of interest to ASIO”.

There has been a persistent but small sub-culture of racist and nationalist extremists in Australia, forming groups, fragmenting, re-forming and often fighting amongst themselves. Over the past year, such extremists have been active in protesting against various Muslim interests. Local racist and nationalist extremists maintain links and draw inspiration from like-minded overseas extremists, and much of their rhetoric and activity is derivative, heavily influenced by developments overseas. At present, their main focus is propaganda and engendering support. However, there is always the possibility of a lone actor or autonomous group inspired by a nationalist or racist extremist ideology engaging in violence as a means of provoking a wider response. A recent development is the emergence of an ‘anti-fascist’ movement, led by self-styled anarchists, which aims to confront those it identifies as fascists, including some of the nationalist and racist extremist groups also of interest to ASIO. Where such confrontations have occurred, the ‘anti-fascists’ have outnumbered the nationalist and racist extremists and police intervention has been required…

There haven’t been many public protests organised by the “small sub-culture of racist and nationalist extremists in Australia” over the course of financial year 2010-11. In fact, just one springs to mind, held in Melbourne on May 15. The rally was organised by the ‘Australian Defence League’ under the leadership of the Englishman Martin Brennan (who was deported from the country in August).

The rally in Melbourne attracted maybe 20 or 30 “racist and nationalist extremists” and several times as many opponents, who after an hour (or two) pushed the ADL off their location at Federation Square. There were no arrests by police whose policing of the rally was reinforced by private security employed by the Square’s owners.

Another anti-Muslim rally was held in Sydney on July 30 (thus technically outside the remit of the report), again organised by the ADL and heavily supplemented by members of the ‘Australian Protectionist Party’ and patriotik yoof belonging to a splinter from the ‘Southern Cross Soldiers’. The rally in Martin Place attracted a slightly larger number of “extremists” (perhaps as many as 40 or even 50), only a handful of opponents, and a relatively large police presence, who ensured that the rally was unmolested by opponents.

More significantly, on January 16 an anti-racist rally was held in the inner-Sydney suburb of Newtown. The rally proceeded to Sergio Redegalli’s notorious mural (Cydonia The Glass Studio, Station Street) where the few score protesters were heavily outnumbered by police who arrested seven (or possibly eight?) people. A report in Mutiny zine (No.58, February/March 2011) provides the following account:

On January 16th, more than 100 people gathered at the Hub in Newtown to protest against racism in the area. Following several community demonstrations against a mural that says, “say no to burqas” at nearby Station Street, the group decided to go to the mural in opposition to this racist statement. Together residents threw paint and pasted anti-racism posters over the mural, made noise and held banners with the statements, “fascists off our streets” and “racists out of Newtown”.

Police acted to protect the mural. As people attempted to leave the area together significant numbers of … police continued arriving [at] the scene. Heavy-handed tactics were used to violently arrest 8 people, and to intimidate and harass everyone present.

Witness reports attest to a high level of police aggression, with punches, grabbing people by the neck and threatening to break bones. Charges are being pressed against those arrested and court solidarity will be essential.

On August 15, all bar one of multiple charges against six defendants were dropped, while a seventh defendant received one conviction for “malicious damage” and an 18-month bond (see : We fought the law and we kinda won…, Mutiny, No.61, October/November 2011).

(A previous rally outside the mural on December 19 resulted in no arrests.)

Note that on August 6, 2011 an “extremist” rally was also held in Brisbane. This rally was organised by the ADL and another, Brisbane-based group called the ‘Australian Patriots Defence Movement’. Perhaps 20 or so attended and confronted a counter-protest several times larger. Again, there were no arrests.

In summary: yes, there is a sub-culture of extreme-right / ultra-nationalist / racist and fascist sentiment in Australia. The politically-organised expression of this sentiment is marginal and frequently sectarian.* Animosity towards Muslims has emerged as a major theme over the last decade. Local members of this milieu are responsive to global developments. There is organised opposition to this sub-culture. Such opposition is sometimes confrontational but is generally reactive, similarly small-scale and diffuse.

The Norwegian anarchist site anarkisterna.com has some interesting analysis in Oslo and Utøya – of words and mass murder (August 11) and From Meta-Politics To Mass Murder – A New Right-Wing Extremism (August 25), while this weekend, a workshop at the London Anarchist Bookfair will be examining some of the issues surrounding these developments:

From black-bloc autonomist nationalists in Germany to ‘third millennium fascist’ squatters in Italy to suit-wearing Nazis in Sweden, the last twenty years has seen huge developments and shifts in the Neo-fascist scene. No longer can Nazis be simply identified by shaved heads, Swastikas and steel-capped boots. Some are even turning to Gramsci, Lenin and international anti-imperialist struggles for inspiration. Paul Hull, a veteran anti-fascist and trade unionist of over ten years in Sweden will discuss the evolution of Neo-Nazi theories and tactics in Northern Europe and will offer suggestions on how the modern militant anti-fascist movement can adapt to these changes.

See also : Open Letter to Friends and Comrades on the Struggle against Racism amongst the Class, Anonymous, August 11, 2011.

Australian issue-motivated groups in general use legitimate protest to publicise and further the cause they advocate. The Australian Security Intelligence Organisation Act 1979 states that lawful advocacy, protest or dissent shall not be regarded as prejudicial to security, and ASIO’s interest in protest is limited to that which is unlawful or violent. Unfortunately, while most issue-motivated groups act lawfully, there are some who do not. There is also a small minority who seek to use protests around a range of emotive issues to further their own (often unrelated) political agenda by provoking, inciting or engaging in violence. It is this fringe that is of concern to ASIO.

ASIO has seen violent and provocative tactics used deliberately by this fringe at a range of protests in recent years, although the frequency and intensity of such violence tends to wax and wane. Provocative tactics used include attacks on police managing protests using ‘invisible’ weapons such as fishing hooks flicked into faces or squirting dangerous or unpleasant liquids in order to provoke an apparently disproportionate police response. The aim is to gain public support and to escalate the anger of those protesting in order to cause widespread violence in an attempt to de-legitimise the government position and undermine the rule of law. Other unlawful tactics used include property damage and sabotage.

The accusation that “fringe elements” have been using invisible weapons is not new. In 2006, for example, former Treasurer Peter Costello claimed that demonstrators at the G20 forum in Melbourne were “throwing balloons filled with urine at police”. He produced no evidence to substantiate his story. Similar claims were made by police during the S11 protests in 2000 (in fact, the claims were made prior to the event itself). ‘Riot!’, an article by Brett Williams in the April 2010 Police Journal, states:

Public order management trainer Mick Chipperfield knows of the barbed-wire bracelets and fish hooks that rabid protestors have used “in close” against police in Melbourne. He knows that, during clashes at the G20 summit (2006) and World Economic Forum (2000), protestors threw urine-filled balloons and soiled tampons at his interstate counterparts.

According to Jeff Sparrow the story about urine-filled balloons has its origins in the mid-1990s during the course of protests against Pauline Hanson, when water bombs were thrown at some of the boneheads who attended her meetings. Throughout this period, no person, to my knowledge, has been charged or convicted of any such offence.

I live in Melbourne, Australia. I like anarchy. I don't like nazis. I enjoy eating pizza and drinking beer. I barrack for the greatest football team on Earth: Collingwood Magpies. The 2021 premiership's a cakewalk for the good old Collingwood.
View all posts by @ndy →
This entry was posted in Anarchism, Anti-fascism, State / Politics, That's Capitalism!, War on Terror and tagged Anarchism, Anti-fascism, ASIO. Bookmark the permalink.