On the one hand, there’s Brendan O’Neill, who reckons that the Occupy protests are really an expression of middle class anger with the working class.

You may remember Brendan from such TV shows as Q&A and his sage advice that if you don’t like what you read in the Murdoch press, you can always set up your own.

On the other hand, Ken Knabb reckons that the “Occupy” movement that has swept across the country over the last four weeks is already the most significant radical breakthrough in America since the 1960s. And it is just beginning.

Oddly enough, Brendan O’Neill writes for Spiked, which got its start courtesy of the now defunct ‘Revolutionary Communist Party’ (another expression of middle class anger with the working class). Their political evolution is a fascinating story of how the chattering class seeks and finds its level.

It is … worth noting the great appeal of Leninist doctrine to the modern intelligentsia in periods of conflict and upheaval. This doctrine affords the ‘radical intellectuals’ the right to hold State power and to impose the harsh rule of the ‘Red Bureaucracy,’ the ‘new class,’ in the terms of Bakunin’s prescient analysis a century ago. As in the Bonapartist State denounced by Marx, they become the ‘State priests,’ and “parasitical excrescence upon civil society” that rules it with an iron hand.

In periods when there is little challenge to State capitalist institutions, the same fundamental commitments lead the ‘new class’ to serve as State managers and ideologists, “beating the people with the people’s stick,” in Bakunin’s words. It is small wonder that intellectuals find the transition from ‘revolutionary Communism’ to ‘celebration of the West’ such an easy one, replaying a script that has evolved from tragedy to farce over the past half century. In essence, all that has changed is the assessment of where power lies. Lenin’s dictum that “socialism is nothing but state capitalist monopoly made to benefit the whole people,” who must of course trust the benevolence of their leaders, expresses the perversion of ‘socialism’ to the needs of the State priests, and allows us to comprehend the rapid transition between positions that superficially seem diametric opposites, but in fact are quite close.

The question is: do all roads lead to Rome?

Predictably enough, Italian authorities have called for another crackdown on anarchists, and it appears as though the wheels are once again in motion. According to AP (Italy cracks down on anarchists after riot, October 17, 2011), rioting Romans have been training for many months–who knows? perhaps even years–at Camp Loukanikos:

Interior Ministry Undersecretary Alfredo Mantovano told Sky TG24 TV in an interview that the crackdown targeted far-left suspects. He gave no details because the operation, which included house searches, was still being conducted Monday.

Rome daily La Repubblica quoted an unidentified rioter as saying anarchists had trained in Greece in urban guerrilla tactics for a year. 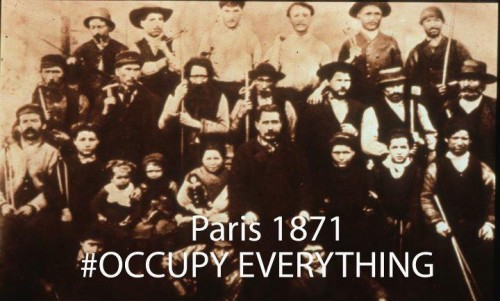 I live in Melbourne, Australia. I like anarchy. I don't like nazis. I enjoy eating pizza and drinking beer. I barrack for the greatest football team on Earth: Collingwood Magpies. The 2021 premiership's a cakewalk for the good old Collingwood.
View all posts by @ndy →
This entry was posted in !nataS, Media, State / Politics, That's Capitalism!, Trot Guide and tagged Brendan O’Neill, Occupy Melbourne. Bookmark the permalink.

1 Response to Bride of Occupy(ed) Melbourne