Update (January 6) : The BBC has a report. Like a number of other media sources, it includes criticism of the site by a journalist named Simone Rafael, who expresses concern over the violation of privacy it represents. (Rafael also writes for the liberal, state-sponsored netz-gegen-nazis.de / Network Against Nazis site.) 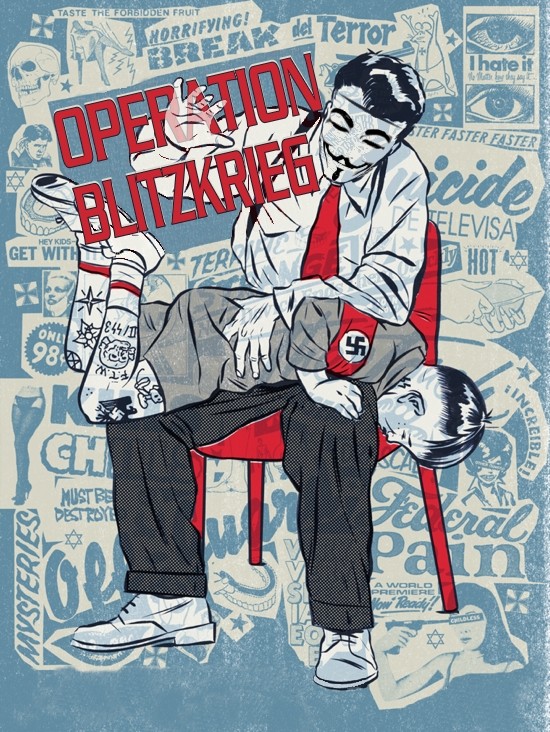 …yeah so on may day 2011 some computer-talking guys did some hackery dackery doo on some nazi websites and called it #OpBlitzkrieg. (some of) the results of their investigations have now been published @ nazileaks, intended to act as a kind of repository on nazi activists. those targeted have included blood & honour, the npd, thor steinar and moar. previous hits include cheeky monkeys on the interwebs exposing nutzi hal turner as an fbi informant… (see also : Neo-Nazi sites hacked… again!, December 3, 2010)

In Nazi-leaks.net Anonymous activists gather personal data from NPD supporters and other rights. At the same time they cripple Web sites of the scene.

Parts of the hacker group Anonymous attack targeted the right scene. For several days, collects and publishes a sub-group that calls itself “Operation Blitzkrieg” on Nazi-leaks.net data – among other alleged NPD supporters, correspondence from right-wing forums and customer lists of fashion brand Thor Steinar and by mail order houses of the scene. On Monday, the hackers also placed several sites temporarily paralyzed, including the neo-platform media age, the DS and the delivery side of the NPD German newspaper voice.

Tweet with “# OpBlitzkrieg wishes all Nazis and especially Altermedia a good start into the new year!” The attacks began on Monday. The right-wing Web sites were not then available for a few more hours.

The attacks by Anonymous on the right scene, however, are not new. “Operation Lightning War” has been running for almost exactly one year. On 5 January some of the activists announced the first action against Nazis . As a reason they called their refusal to accept freedom and equality of all people, and their attacks on refugees and immigrants, on press and political opponents.

The new portal for a Nazi-leaks.net should be a platform for supporters via e-mail can submit data from the right scene – a kind of anti-fascists to Wikileaks.

The name says it all – the Anonymous group acts as a movement without a visible hierarchy and faces. Actions of their followers dress up like a mask of Guy Fawkes. The 1605 had attempted to assassinate the King of England. That in turn inspired the authors of the comic series V – Vendetta show in the eighties, hidden behind her protagonist a Fawkes mask. He protested his actions against an oppressive and monitoring at the state, which in turn took up some Anons as a symbol for their own struggle.

Origin of the movement and the name is the image board 4chan . On the side, any unmoderated and uncensored pictures and leave messages, and specify its name. However, that hardly anyone is doing, so that most texts are marked with the name “Anonymous.”

Anonymous does not exist as an organization. It is much more an idea, a movement which wishes to everyone and everyone can use those. Coordination is also not right. The main instrument of this non-Coordinaton the Internet Relay Chat (IRC). In this free service to open any discussion channels and write in them with any number of other messages.

In changing channels there are possible targets discussed and coordinated attacks on websites. Since 2010, there is also a website to spread the messages and new promotions are announced. Currently she can be reached at anonops.blogspot.net. In addition, information via Twitter and Facebook spread.

But no one has to show up in these forums and channels to be one Anon. When in doubt, it is sufficient to support public Anonymous, as the American civil rights activist John Perry Barlow is doing, or to participate in the attacks on servers. The software to Low Orbit Ion Cannon mentioned, there are free on the net.

There is no boss, manager, leader or the like. On the contrary, anyone who presents himself as such in the media or the Internet may assume, in the shortest time insulted by supporters of Anonymous or even become the target of attacks to be. The self-image is that of an ant colony. So Anonymous is an implementation of the idea of the Hive Minds, the swarm intelligence. In the mass, so the idea is to make a vast difference, so it should only take the result for the mass itself.

Nevertheless, there is no such thing as an operation level within the group. At least there are some people who act as an operator on IRC, so be careful with the observance of certain rules in the chats and punish offenses against it. You do not necessarily have anything to do with the planning of actions.

Anonymous simultaneously lays emphasis on taking responsibility for the actions that were coordinated by the network. Therefore, usually letters claiming to be written. However, the movement has no influence on “lone assassin” who use their names and will not have to.

Anonymous sees itself as a movement that fights for freedom and against censorship network. But beyond that there are no clearly stated objectives. Actions can be set against sects as well (is the oldest known one against Scientology) as against right-wing forums, credit card companies or managers of the entertainment industry.

Also, it is not really a political movement in the core. Originally it came to pranks – on behalf of unpleasant people, for example, lots to order pizza. The fun was in the foreground or in the jargon of network: the lulz. Are meant to laugh, especially in the sense of schadenfreude.

Only gradually is it in the past few years, something like a grassroots movement grow , where the fun but still looks to the fore. As TIME ONLINE readers BadLuck wrote in a commentary : “I Came For The Lulz, but now i fight for Freedom of speech and free for the interweb.” I came because of the fun, now I’m fighting for freedom of speech and a free network.”

For the participants, however, the actions can be quite risky in doubt, as some countries like the U.S., Britain and the Netherlands have begun to pursue criminal attacks by Anonymous.

On the other hand, the activists hope that volunteers check and evaluate the published data, are looking for some names that appear in several of the leaked lists. The site works so as a pillory. The attack on the various right-wing sites should not be thought of as an accompanying modified PR measure.

Provides in the right circles, apparently for a little restless. At age media [Altermedia] that “We should also mention that references are gratefully on the identity of the pseudo-anonymous-ticks were received and are often rewarded with bonuses such as severed fingers …” How serious was meant is unclear.

I live in Melbourne, Australia. I like anarchy. I don't like nazis. I enjoy eating pizza and drinking beer. I barrack for the greatest football team on Earth: Collingwood Magpies. The 2023 premiership's a cakewalk for the good old Collingwood.
View all posts by @ndy →
This entry was posted in !nataS, Anti-fascism, Broken Windows, Media and tagged @OpBlitzkrieg, nazi-leaks. Bookmark the permalink.