I just received word that several weeks ago a young anarchist and anti-fascist from Samara, Russia named Nikita Kalin was murdered. Below is the text produced by avtonom.org. See also : Russian nationalists march in Moscow, Clara Weiss, wsws.org, November 11, 2011 | Attempted murder of anarchist anti-fascist in Moscow (September 5, 2010) | [For Dion] The life and death of Ivan “Bonecrusher” Khutorskoy (November 18, 2009).

The story will likely be ignored by English-language media. The tone for much coverage of anti-fascist struggle in Russia is perhaps best expressed in Jake Rudnitsky’s February 2006 article for The eXile on ‘Scared Skins’. The yuppie scribbler writes: “Had I had the good sense to call [National Bolshevik ideologue] Edward Limonov before embarking on this fool’s errant, I could have saved myself a lot of trouble. Limonov told me, “I have no interest in these guys. They’re irrational.” After all my efforts to secure an interview, I can safely say, he’s right. Ukrop’s name says it all, really. AntiFA is the dill of Russia’s extremist politics: bland, irrelevant, and easily ignored.”

For its part, before signing a formal agreement with the Indian government to sell it uranium in December 2011, the Australian government’s decision to sell uranium to Russia was cemented over the dead body of Russian anarchist Ilya Borodaenko. Borodaenko was murdered in July 2007 by neo-Nazi thugs (‘hooligans’ in the lexicon of the Russian state) at the behest of local authorities, keen to destroy the environmental camp which Ilya had joined and which had been established at Angarsk, a small industrial town in south-eastern Siberia, established in 1948, and home to The International Uranium Enrichment Centre.

9th of February, 6:30 in the morning in area of institute “FIAN” a janitor found body of Nikita Kalin, born in 1991. 8:00 police arrived, and 11:00 AM police contacted mother of the murdered. According to mother, Nikita was stabbed 61 times, besides this his ribs were fractured multiple times, and head was wounded as well. No property was stolen. Currently a suspect of the murder is arrested, blood of Nikita was found in clothes of the arrested.

It is obvious, that Nikita was attacked with a group, and police also told to mother off the record, that detained suspect is a national socialist activist, and refuses to name any suspects. Besides brutality of the murder, investigation has still not questioned mother of Nikita, or his friend who was the last person who saw it. Due to this, we suppose that there will be an attempt to cover the case, as it often [happens] in Russia. However, suspect has already hired a lawyer.

We suspect, that investigation is working on interests of the arrested, and thus support is necessary. At this point, a human rights organisation has provided a lawyer, but funds are still needed for funeral costs.

Nikita was from a simple working class family, and never hide his anti-fascist and anarchist views.

In case you want to help friends and family of Nikita with funeral costs, you may donate to Anarchist Black Cross of Moscow: 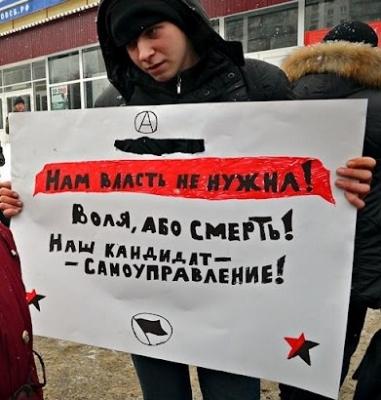 In photo, Nikita is in a local meeting against election fraud, holding [placard] “We do not need no authority! Liberty or death! Our candidate is self-governance!”

In addition to being murdered by neo-Nazis and other Russian fascists, antifa in Russia also encounter state repression. A recent (February 2012) case:

We, the anti-fascists and anarchists of Nizhny Novgorod (Russia), appeal to concerned people around the world. The political police (the Center for Combating Extremism or Center “E”) have fabricated a criminal case against our comrades. Anti-fascism has been outlawed in our city. We need your solidarity and support! —-

What are the charges against our friends and comrades? —-

Five young men, our friends, have been charged with organizing an “extremist community” under the exotic name of “Antifa-RASH.” According to our illiterate police, this strange acronym stands (in English) for “Red anarhia skinheads” [sic] and should be translated from their broken English slang into Russian as “red anarchy of skinheads” (a combination of all the fears of ordinary law-abiding citizens.) Artyom Bystrov, Albert Gainutdinov, Pavel Krivonosov, Dmitry Kolesov and Oleg Gambaruk are alleged to have formed this organization in order to carry out assaults on people espousing ultra-rightwing views and to incite hatred against them and against wealthy people…

I live in Melbourne, Australia. I like anarchy. I don't like nazis. I enjoy eating pizza and drinking beer. I barrack for the greatest football team on Earth: Collingwood Magpies. The 2021 premiership's a cakewalk for the good old Collingwood.
View all posts by @ndy →
This entry was posted in Anarchism, Anti-fascism, Death and tagged antifa, Nikita Kalin, Russia. Bookmark the permalink.

3 Responses to Nikita Kalin : (another) anarchist anti-fascist murdered in Russia