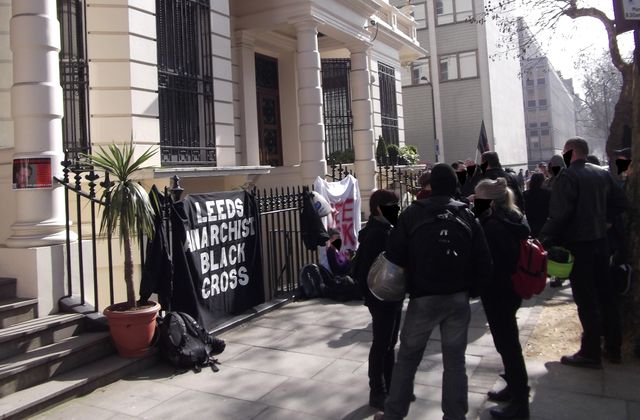 On Thursday, March 15 a crowd of about 30 people — including comrades from a range of local anarchist groups — attended a picket of the Bulgarian Embassy in support of imprisoned anti-fascist Jock Palfreeman. Leaflets explaining Jock’s case were distributed to passers-by and a Bulgarian flag was burnt.

On Wednesday, March 14 Greek police were unable to prevent a small group of anarchists from re-decorating the newly-opened offices of the neo-fascist Chrysi Avyi (‘Golden Dawn’). While local police are reportedly unhappy at the new interior design, polls suggest a new age may be dawning for their golden-haired fascist comrades. According to another source: Syriza’s Alexis Tsipras recently accused the government of being “not that Greek”; a delegation from Golden Dawn brought food and fraternal greetings to striking Communist unionists at a steel plant near Athens, one of whom welcomed them with the words, “All Greece is at our side.” Both ends of the spectrum enthusiastically exploit the anti-German feeling that’s now almost ubiquitous, with swastikas burning in Syntagma Square and cartoons in the popular press of Angela Merkel wearing a Nazi uniform.

Several weeks prior to the art attack in Patras, on Friday, February 24 another group of anarchists harshly criticised “a touring company of dastards nostalgic for the Hitler era” which had somewhat foolishly adopted the habit of openly assembling in Kyprou Square (Kalithea, Athens). The swastika-lickers were eventually forced to agree with the trenchant critique of their asshattery and the Square is once again open to a much broader range of styles. The action was dedicated to the memory of comrade Nikita Kalin. [English // Greek]

[See also this disaccount from disaccords of some local graf in support of the cheeky Greeks.]

‘Roll Over Racism’ is the name given to a gig organised for April 21 at The Bald Faced Stag in Leichhardt. It takes place at the same time as the neo-Nazi Hammered Festival in Brisbane. Fingers xed any profits will be donated to Russian antifa or something. (For more infos contact [email protected])