Update (July 13) : While having earlier succeeded in having FWA ban solidarity action at other Coles’ warehouses, today Toll failed to convince the industrial umpire to blow the whistle and declare the Somerton picket unlawful. As a result, Toll is applying to the Supreme Court for an injunction against the picket tomorrow (Saturday, July 14). A community rally in support of the striking workers is to take place on Sunday (July 15) at midday. Supposedly, ‘Coles [remains] hopeful of smashing workers’ picket at warehouse’ (Stephen Drill, Herald Sun, July 13, 2012). 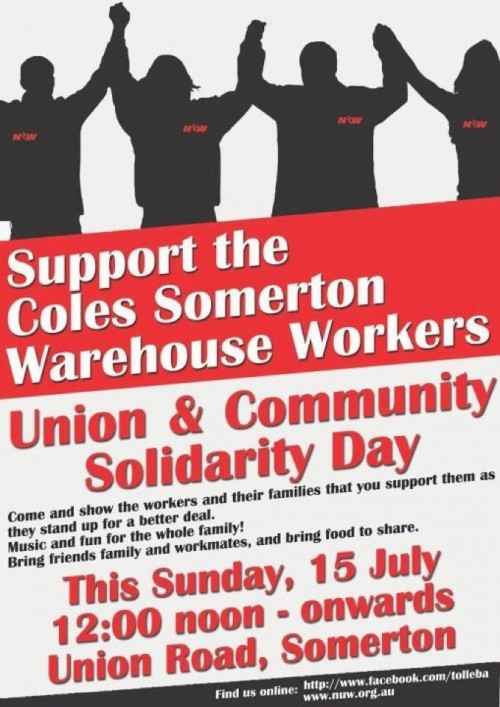 Hundreds of Toll workers are currently on strike at one of three National Distribution Centres belonging to Coles, this one on the corner of Union and Somerton Roads, Somerton. The workers have been on strike since 6am, Tuesday morning (July 10) and appear determined to continue until a satisfactory EBA is obtained.

The last EBA (Enterprising Bargaining Agreement) between Toll and the NUW (National Union of Workers) ceased at the end of June. In essence, workers and the NUW are demanding parity in wages and conditions with workers in other Coles’ warehouses: Toll refuses. (NB. Coles out-sources its distribution network to Toll.) The union has expressed concern over five key issues:

1. Time for workers to have with their family: the creation of a roster for day shift workers that allows them to take a rostered day off and voluntary public holiday system – so that workers can choose rather than be forced to work public holidays
2. Shift loading to be paid for the entirety of a shift to a worker who does afternoon or night shift – not a couple of hours per shift as proposed by the company
3. The automatic option for direct and indirect casuals to become permanent employees after 6 months
4. Inclusion of basic union rights in the Agreement – such as Right of Entry
5. A decent wage increase to catch up to other Coles warehouses

Large numbers of police have also assembled at the warehouse in an attempt to intimidate workers into accepting Toll’s sub-standard offer; today (Thursday, July 12) workers voted to reject it. It’ll be interesting to see if Victorian Premier Ted Baillieu orders police to smash the picket (an unsuccessful attempt to do so took place during the strike at Baiada Poultry last year). Otherwise, last week Uncle Ted triggered a mass rally by construction workers protesting a new, union-busting code for the industry. Inter alia, “The code, which comes into force on Sunday, will push companies bidding for government construction contracts to crack down on the display on building sites of union logos, mottos and insignia that imply union membership is compulsory.”

The equally tricksy Toll is happy to spy on its injured workers. A pointyhead from Adelaide University (Injured workers spied on by transport giant Toll, Clay Lucas, July 2, 2012) reckons s’all good but: Employment law expert Andrew Stewart, from Adelaide University, said this kind of surveillance was legal and ”not unknown – though it’s more commonly used to resist a workers compensation claim. There’s nothing unlawful about it, so long as the investigators don’t engage in trespass, secretly tape conversations [or] tap phones,” Professor Stewart said.

As for the strike, Workers’ Solidarity Network has published a list of six ways you can help Toll workers win their dispute here. There’s a Facebook event page here too. One way you can help is by visiting the picket.

The hashtag for disco on the strike on Twitter is #StrikeColes.

Of course, every cloud has a silver lining, and in this case it’s the golden handshake given to departing CEO Paul Little. Upon leaving his position in October last year:

TOLL Holdings’ departing chief executive, Paul Little, will receive $3 million in farewell payments and for work as an adviser to his successor, Brian Kruger.

The exit payments are on top of as much as $2.41 million he will pocket for his final six months as Toll’s boss.

After he missed out on long-term bonuses, Toll will make an ex-gratia payment to Mr Little of $1.255 million.

Mr Little will also be paid $1.5 million for offering advice to his successor next year, and for representing Toll on the board of the Singapore government business.

Mr Little, who will step down as managing director on January 1, received a total package of $6.04 million – including a cash bonus of $2.3 million – for the year to June 30.

It is up from almost $5.8 million a year earlier.

I live in Melbourne, Australia. I like anarchy. I don't like nazis. I enjoy eating pizza and drinking beer. I barrack for the greatest football team on Earth: Collingwood Magpies. The 2020 premiership's a cakewalk for the good old Collingwood.
View all posts by @ndy →
This entry was posted in State / Politics, That's Capitalism! and tagged #StrikeColes. Bookmark the permalink.