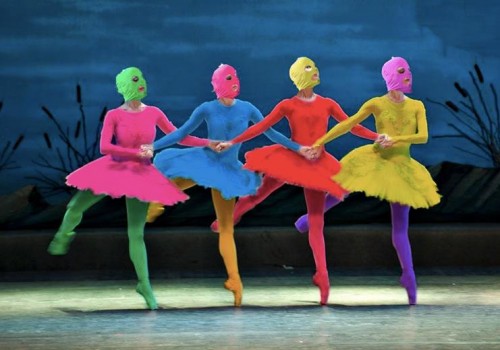 Yeah so in case you’ve been living under a rock and haven’t heard, last week (August 17) three members of the Russian group Pussy Riot — Maria Alyokhina, Yekaterina Samutsevich and Nadezhda Tolokonnikova — were sentenced to two years in a penal colony for the crime of ‘hooliganism motivated by religious hatred’; viz, performing a protest song against President Vladimir Putin in an Orthodox church (Cathedral of Christ the Savior) in Moscow on February 21, 2012 [original video | dubbed video].

Judge Marina Syrova called their behaviour “blasphemous” and described it as a “gross violation of public order showing obvious disrespect for society”. She also said, “The girls’ actions were sacrilegious, blasphemous and broke the church’s rules”.

I wonder how she feels about Angry Kremlins? (Or the hackery-dackery-do of her court?)

You can read the three women’s closing trial statements here.

Other articles of interest include Vadim Nikitin, The Wrong Reasons to Back Pussy Riot, The New York Times, August 20, 2012: “…what Pussy Riot wants is something that is equally terrifying, provocative and threatening to the established order in both Russia and the West (and has been from time immemorial): freedom from patriarchy, capitalism, religion, conventional morality, inequality and the entire corporate state system.” Sara Joseph (Castan Centre for Human Rights Law) takes ‘A closer look at the Pussy Riot phenomenon’ here (August 24, 2012).

In Counterpunch (The Secret History of Pussy Riot, August 23, 2012) a rather deranged Israel Shamir (AKA Jöran Jermas/Adam Ermash) reckons, inter alia, that an OMGWTF! Jewish bloke named Marat Gelman is teh bRanes behind Pussy Riot, claims that the US State Department paid for the August 17 single published by The Guardian, blames another OMGWTF! Jewish bloke (Alex Plutser-Sarno) for the antics of the group Voina (from which Pussy Riot is understood to have emerged) and otherwise writes the kind of shit you’d expect of a bizarro.

Bob (He’s From Brockley) recommends reading Soupy One’s blog, which has republished an article originally published by Searchlight in May 2004 and titled ‘Israeli writer is Swedish anti-Semite’; he’s also compiled a list of other articles critical of Shamir here.

I live in Melbourne, Australia. I like anarchy. I don't like nazis. I enjoy eating pizza and drinking beer. I barrack for the greatest football team on Earth: Collingwood Magpies. The 2021 premiership's a cakewalk for the good old Collingwood.
View all posts by @ndy →
This entry was posted in !nataS, Anarchism, Anti-fascism, Art, Collingwood, Media, Music, Poetry, Sex & Sexuality, State / Politics, Student movement, That's Capitalism! and tagged Pussy Riot, Russia. Bookmark the permalink.

6 Responses to More Pussy Riot from Melbourne to Moscow