Further case studies in ‘The Discreet Charm of the Bourgeoisie’

A Sydney financier has been jailed for 16 months for “the worst case” of aggravated cruelty against animals. 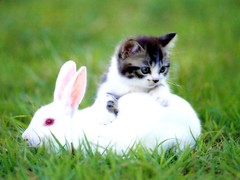 [Above : Agent 00Kitten of the Bunny Rabbit Liberation Front is fiercely protective of her Oryctolagus cuniculus companion]

Brendan Francis McMahon, 37, of Tamarama, will have to spend at least 12 months in jail for his torture, mutilation, and alleged sexual offences against 17 rabbits and a guinea pig.

The magistrate, Ian Barnett, said a strong message should be sent to the community that people such as McMahon could not escape responsibility for their actions by the fact they were psychotic at the time.

“In my view this is one of the worst case scenarios of aggravated cruelty to animals,” he said.

He accepted McMahon had a lifelong cannabis addiction and, before and during the offences against the animals, had a $125 a day addiction to methamphetamine (also known as ice).

“In my view there is community outrage at this matter and someone should not be allowed to commit such offences of aggravated cruelty against animals and say ‘Well I had been using ice at the time. I have been taking cannabis most of my life.’

“My view is … this is not acceptable.”

The dead or dying animals, some skinned, were allegedly found in and around McMahon’s York Street office between July and early August last year. 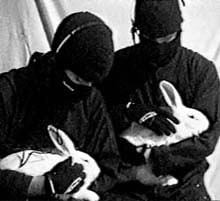 [Above : Anonymous human comrades strike back against the animal-hating Empire of capital and state. Some people build cages; others dismantle them.]

I live in Melbourne, Australia. I like anarchy. I don't like nazis. I enjoy eating pizza and drinking beer. I barrack for the greatest football team on Earth: Collingwood Magpies. The 2021 premiership's a cakewalk for the good old Collingwood.
View all posts by @ndy →
This entry was posted in Cats. Bookmark the permalink.