Update ( October 16 ) : Advertisers return to Alan Jones – then leave again, Karl Quinn, The Sydney Morning Herald, October 16, 2012. After having suspended advertising on The Parrot’s program, this morning 2GB ushered in its return… only they appear not to have told some of the unwary. Happily, A Current Affair knows its market, and is proud to support Mr Jones. And on the other hand, Channel 9 is a bit fuct anyway.

Update ( October 8 ) : Macquarie Radio Network, owners of 2GB, announced yesterday that it was temporarily suspending advertising on The Parrot’s program. A petition on Change.org calling on the station to sack the shock-jock has attracted over 110,000 signatures.

Update ( October 2 ) : Harrington Kitchens has stated that it does not sponsor Alan Jones.

A number of sponsors — including Bing Lee, Challenger, Mercedes-Benz, Fantastic/Freedom Furniture, Hyundai and others — have declared that they have suspended their support for The Alan Jones Show on 2GB. How long this lasts is anybody’s guess. A number of other sponsors — including St George Bank, Toyota and Virgin — have stated that they do not in fact advertise on his show.

Note that while Challenger has declared that it “cancelled its advertising relationship with Jones’s program on Sydney radio station 2GB”, 2GB continues to declare the company a sponsor of the show.

Update : A coupla sponsors have announced they’ll no longer be shovelling money in Alan Jones’ direction. On Facebook Mercedes-Benz wrote “Mercedes-Benz Australia/Pacific has instructed its dealers to cease any form of advertising on the Alan Jones show as our company does not condone such inappropriate comments” while Freedom (which isn’t on the list) tweeted it won’t be advertising with Alan, and investment company Challenger ain’t either.

For some strange reason Sydney radio station 2GB has taken down its list of sponsors. The ‘Boycott Alan Jones and the companies that advertise him’ Facebook page provides the list below, presumably extracted from the 2GB website sometime before the proverbial hit the fan. Of course, if you’re a member of the Sydney University Liberal Club you may agree that Jones’ speech was “brilliant” and want to contact the sponsors and inform them of your support (for their support, for Alan). And if you’re a member of the IPA, I look forward to reading your defence of Alan Jones and about how a campaign to shame his sponsors is an attack on free speech characteristic of Nazi Germany. 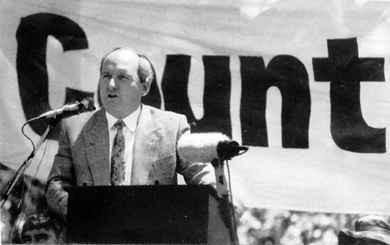 “Bing Lee sponsored the Bulldogs Rugby League Football Club until allegations that players were allegedly involved in a gang rape in Coffs Harbour.”

I live in Melbourne, Australia. I like anarchy. I don't like nazis. I enjoy eating pizza and drinking beer. I barrack for the greatest football team on Earth: Collingwood Magpies. The 2023 premiership's a cakewalk for the good old Collingwood.
View all posts by @ndy →
This entry was posted in !nataS, Death, Media, State / Politics, That's Capitalism! and tagged Alan Jones. Bookmark the permalink.