Two weeks ago in Sydney, a small group of White-nationalists-in-anarchist-drag rocked up to a rally against the latest Israeli attack on Gaza (aka ‘Operation Pillar of Defense’, November 17). Armed with banners, Anonymous masks and bizarro political merch (branded tees and the like), the 10 or so wingnuts were soon identified as hostile by members of the crowd, who proceeded to isolate them outside the Town Hall. Reportedly, an attempt was made to confiscate one of their banners, which was unsuccessful. The White nationalists were then surrounded by police, and remained silent and stationary at the Town Hall for the duration of the rally.

So, who were these wEiRd0eS?

Their propaganda proclaimed them to be ‘national anarchists’. While the term may seem oxymoronic, ‘national anarchism’ is in fact an ideological development on the far right, one whose immediate origins can be traced back to the late 1980s and early 1990s and attempts by racists and fascists to find a place for their activities among anarchists in England. The standard account of this fringe and its evolution during this period is ‘Co-opting the Counter Culture: Troy Southgate and the National Revolutionary Faction’, Graham D. Macklin, Patterns of Prejudice, Vol.39, No.3, September 2005.

Despite having some initial success (fooling a handful of leftists, including the recently-deceased Terry Liddle, into collaborating with them), Southgate and his followers found little real political purchase among radicals. (Of course organising, from the mid-2000s, a talking-shop in London, calling it ‘New Right’, and inviting various extreme-right wing loons — including Holocaust-denialists and other mentalists — to talk shit to other wEiRd0eS doesn’t help any.) In any event, Southgate & Co have sensibly turned to the online world for support and in this realm they’ve been reasonably successful, the milieu specialising in virtual political expressions, seemingly on the basis of Ein Volk, Ein Blog (my favorite being a Hitler-worshipping Afro-punk). 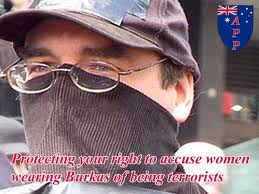 In Australia, the national anarchists (hereafter referred to as gnats) announced their existence back in 2007, when a group of around 20 or so right-wing loons of diverse origins — including Darrin Hodges (above), the (former) leader of the anti-Muslim ‘Australian Protectionist Party’ in NSW, and disgraced academic and White racialist Andrew Fraser — gathered at the APEC counter-protests, also in Sydney. (See : Anarchist statement on the New Right, October 21, 2007.) As in the more recent incident, at APEC the racist wankers were isolated and protected by a large number of police.

The principal exponent of ‘national anarchism’ in Australia is a Sydney-based small businessman named Welf Herfurth (above, with Adelaide-based Holocaust denialist Fredrick Töben, together holding an NPD flag belonging to German neo-Nazi Horst Mahler), who has been joined in the past by a handful of Victorians (including a young Creatard from Geelong named Scott Harrison), a student from Perth named Nicholas Cole, and more recently several boneheads. Thus for reasons best known to themselves, the members of the Australian franchise of the US-based neo-Nazi Volksfront gang cultivated close links with Herfurth & Co in Sydney; following its formal dissolution in October (seemingly as a result of US pressure on the group in the wake of neo-Nazi skinhead Wade Michael Page’s murderous spree), it would seem reasonable to expect former VF members to increase the level of their activity on behalf of the gnats/New Right. As it stands, it’s difficult to gauge the seriousness with which the gnats in Sydney intend to continue to provoke the left, but a source in Sydney’s Chinatown reckons former VF member Steev Levings [?] is keen, and Steev’s political loyalties find graphic expression on his body: 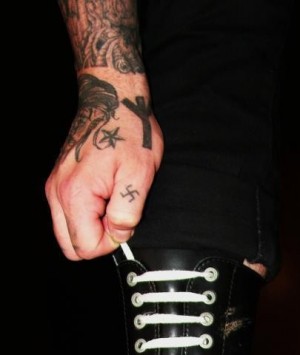 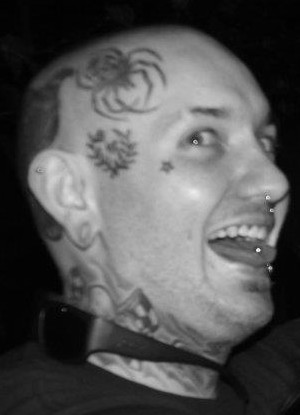 The recent Gaza intervention is one of just a handful of public manifestations by gnats, who for whatever reason seem to be concentrated in Sydney (as is the Australia First Party and Australian Protectionist Party), while Melbourne can boast of being the centre of B&H and Hammerskin activity and the tiny groupuscule Nationalist Alternative. Further afield, the gnats appear to have only been able to maintain a temporary presence on The Streets of San Francisco — in the shape of a bunch of BANANAs. A beat-down on BANANA leader Andrew White (‘Andrew Yeoman’) on May Day a coupla years ago — and his subsequent denouncement by ideologue Southgate as a psychopath and race traitor — put paid to White’s dream of a Bay Area purged of non-Whites, but not before the racist loser paid a visit to Australia to address AF’s annual conference the (2009) Sydney Forum (at which his kamerad Welf Herfurth performs as MC).

Otherwise, the gnats may be located within a wider attempt by the far right to re-articulate a form of racist nationalism, one which has taken on increasing significance, especially in Europe, over the last few decades. See, for example: Czech Republic : The Big Neo-Nazi Crib (antifa.cz) | Germany : German city battles elusive new-look neo-Nazis (Reuters) | Italy : CasaPound’s First Big Outing in Rome Was a Snooze-Fest, (Giuseppe Pisani, Vice).

Finally, as Durruti put it:

Fascism is not to be debated, it is to be smashed.

I live in Melbourne, Australia. I like anarchy. I don't like nazis. I enjoy eating pizza and drinking beer. I barrack for the greatest football team on Earth: Collingwood Magpies. The 2020 premiership's a cakewalk for the good old Collingwood.
View all posts by @ndy →
This entry was posted in Anarchism, Anti-fascism, State / Politics and tagged Co-opting the Counter Culture: Troy Southgate and the National Revolutionary Faction, national anarchism, New Right, Palestine, Steev Levings, Troy Southgate, Welf Herfurth. Bookmark the permalink.