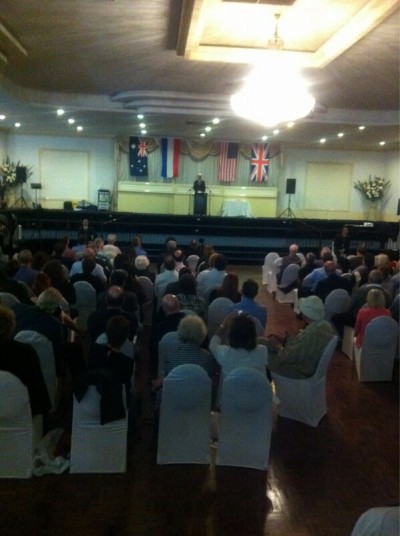 Above : Some elderly people have their prejudices about Mooselems confirmed by a dashing Dutchman. Img stolen from Hamish Fitzsimmons (Lateline).

Update (8:00pm) : The picket has wound down. Maybe 150 attended. There were no arrests. Wilders is next scheduled to speak in Perth tomorrow — the Q Society appears to be having some problems finding a venue; Muslims in Melbourne may like like to avoid La Mirage in future…

Update : There’ve been some scuffles between police, picketers and those attending Wilders’ speech. Police have used horses to break the picket outside the venue. Wilders’ supporters include a few known racists and fascists from organisations such as the ADL. It’s unclear yet if anyone’s been arrested. There’s a very large police and media presence.

A protest/picket will be at the reception centre from this time.

Some people will be assembling in the City Square at 5pm; many no doubt then travelling to Somerton. Others will be meeting from 5.00-5.30pm at Roxburgh Park train station (Upfield line) before heading to the venue.

La Mirage Receptions may be congratulated for facilitating Wilder’s anti-Muslim mania on (03) 9305 4855.

I live in Melbourne, Australia. I like anarchy. I don't like nazis. I enjoy eating pizza and drinking beer. I barrack for the greatest football team on Earth: Collingwood Magpies. The 2021 premiership's a cakewalk for the good old Collingwood.
View all posts by @ndy →
This entry was posted in State / Politics and tagged Geert Wilders, La Mirage, La Mirage Reception & Convention Centre. Bookmark the permalink.