Is Socialist Alternative a political cult? 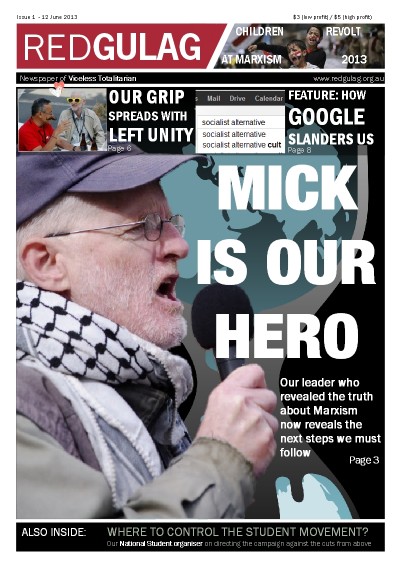 A critic sent me the above image to accompany the launch of a new fortnightly newspaper, Red Flag. Produced by Socialist Alternative, “a revolutionary Marxist organisation” (with many hundreds of members it is, perhaps, apart from Socialist Alliance, the largest such organisation in Australia), the new project represents a major new investment for the party. (For a recent overview of Australian organisations on the revolutionary left, see Trot Guide 2012.) While obviously intended to be a humourous rather than a serious critique of the organisation, the claim that SAlt is in some way equivalent to a cult seems to have some traction on the internets, so I thought I’d see if there’s any substance to it.

To the best of my knowledge, the most relevant analysis of political-organisation-as-cult is that made by academic Dennis Tourish in his article ‘Ideological intransigence, democratic centralism and cultism: a case study from the political left’ (Cultic Studies Journal, 1998):

…political cults tend to be characterised by the presence of the following traits.

1. A rigid belief system. In the case of left wing political cults this suggests that all social, natural, scientific, political, economic, historical and philosophical issues can only be analysed correctly from within the group’s theoretical paradigm – one which therefore claims a privileged and all-embracing insight. The view that the group’s belief system explains everything eliminates the need for fresh or independent thought, precludes the possibility of critically appraising past practice or acknowledging mistakes, and removes the need to seek intellectual sustenance outside the group’s own ideological fortress. All such thinking is dismissed as contaminated by the impure ideology of bourgeois society.

2. The group’s beliefs are immune to falsification. No test can be devised or suggested which might have the effect of inducing a reappraisal. The all-embracing quality of the dominant ideology precludes re-evaluation, since it implies both omniscience and infallibility. Methods of analysis which set themselves more modest explanatory goals are viewed as intrinsically inferior. Those who question any aspect of the group’s analysis are branded as deviationists bending to the ‘pressures of capitalism’, and are driven from the ranks as heretics.

3. An authoritarian inner party regime is maintained. Decision making is concentrated in elite hands, which gradually dismantles or ignores all formal controls on its activities. Members are excluded from participation in determining policy, calling leaders to account, or expressing dissent. This is combined with persistent assurances about the essentially democratic nature of the organization, and the existence of exemplary democratic controls – on paper.

4. There is a growing tendency for the leaders to act in an arbitrary way, accrue personal power, perhaps engage in wealth accumulation from group members or in the procuring of sexual favours. Activities which would provoke censure if engaged in by rank and file members (e.g. having a reasonable standard of living, enjoying time off, using the organization’s funds for personal purposes) are tolerated when they apply to leaders.

5. Leader figures, alive or dead, are deified. In the first place, this tends to centre on Marx, Trotsky or other significant historical figures. It also increasingly transfers to existing leaders, who represent themselves as defending the historical continuity of the ‘great’ ideas of Marxist leaders. In effect, the new leaders are depicted, in their unbending devotion to the founders’ ideals, as the reincarnation of Marx, Trotsky or whoever. There is a tendency to settle arguments by referring constantly to the sayings of the wise leaders (past or present), rather than by developing an independent analysis. Even banal observations are usually buttressed by the use of supporting quotations from sanctified sources.

6. There is an intense level of activism, precluding outside interests. Social life and personal ‘friendships’ revolve exclusively around the group, although such friendships are conditional on the maintenance of uncritical enthusiasm for the party line. Members acquire a specialised vocabulary (e.g. they call each other ‘comrade’), which reinforces a sense of distance and difference from those outside their ranks. The group becomes central to the personal identity of members, who find it more and more difficult if not impossible to imagine a life outside their organization.

While some find the presence of SAlt members at public rallies very annoying, and others claim the organisation is unduly hostile to former members or members of rival organisations who operate on the same territory, I don’t see how much of the above can fairly be applied to it. Of course, this may simply be a matter of size — SAlt is considerably smaller than Militant was at the time Tourish examined it — or a sign of the times. In any event:

1. There is a certain degree of ideological rigidity in SAlt – its theoretical productions are rather dull, in my opinion, and hardly represent the best of Marxist-influenced theory — and it subscribes to some variant of ‘revolutionary Marxism’, but I’m not sure it’s so crass as to proclaim its total understanding of Australian or global society. In any case, its most sophisticated ideological output may be found in its journal, Marxist Left Review.

2. This second point — immunity to falsification — is closely related to the first. Certainly, any claims to being avant-garde can be fairly easily refuted by reference to some of SAlt’s less-successful ventures into political activism.

3. I’ve never been a member of SAlt and know few who have been, so I’m not especially familiar with its internal regime. Certainly, the organisation’s Constitution is a public document and seems to embody a reasonable degree of formal democracy.

4. I’m not aware of any evidence to suggest any such corruption — “a growing tendency for the leaders to act in an arbitrary way, accrue personal power, perhaps engage in wealth accumulation from group members or in the procuring of sexual favours” — on the part of SAlt’s leadership.

5. In terms of ideological debate, while Marx and Lenin remain crucially important figures, I’m not aware of any SAlt leaders claiming any such authority or, moreover, who could avoid being widely laughed at if they did.

6. There does seem to be an intense level of activism on the part of SAlt members, though the extent to which its organisational culture as a whole promotes this kind of social and political alienation is an open question (for which anecdotal evidence is insufficient to rely upon for any kind of authoritative answer).

In summary, while their analysis may be fundamentally flawed, their program unattractive, and their politicking sectarian, it doesn’t seem to be either especially accurate or terribly useful to simply dismiss SAlt as a ‘cult’. A useful critique of their underlying political philosophy — since slightly altered by the decision by the Revolutionary Socialist Party to join them — is Marxism, Anarchism, & the Genealogy of “Socialism From Below” by Tom Keefer (Upping the Anti, No.2, 2005). (“At its final congress on 28 March 2013, the RSP voted unanimously to merge with Socialist Alternative.”)

I live in Melbourne, Australia. I like anarchy. I don't like nazis. I enjoy eating pizza and drinking beer. I barrack for the greatest football team on Earth: Collingwood Magpies. The 2023 premiership's a cakewalk for the good old Collingwood.
View all posts by @ndy →
This entry was posted in State / Politics, Student movement, Trot Guide and tagged Dennis Tourish, political cults, Socialist Alternative. Bookmark the permalink.

56 Responses to Is Socialist Alternative a political cult?